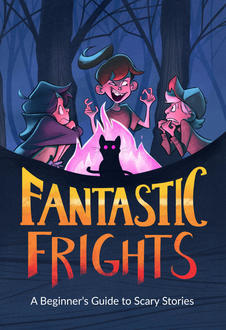 Are You Afraid of the Dark, Freaky Stories, Tales From the Cryptkeeper... these iconic kids' TV shows heralded in an entire generation of horror fans. Saluting the horror story for present-day middle-grade readers is a brand-new comics anthology,  Fantastic Frights: A Beginner's Guide to Scary Stories, from Cloudscape Comics. We talk to cover designer Braden Hallett and interior designer and illustrator Jade McGilvray on how they made this book perfectly spooky for the next cohort of horror aficionados.

To celebrate the Halloween season, we sat down with two of the artists involved in making Fantastic Frights the beautiful book it is. Fantastic Frights is a horror anthology made up of creepy comics for middle grade readers.

Braden Hallett designed the book’s front and back cover.

Jade McGilvray designed the book’s interior covers, and illustrated the story ‘The Night City’ in collaboration with writer Ian Fenton.

Fantastic Frights is a horror-themed anthology for kids, what about this project made you want to participate?

JM: I really love science-fiction horror and fantasy horror! And I think kids like to be creeped out just as much as adults do. Fantastic Frights was almost perfectly up my alley.

Jade, you designed the monsters that grace the interior covers of Fantastic Frights—in addition to illustrating one of the stories. Can you give us a little insight on how you go about designing these kinds of monsters? 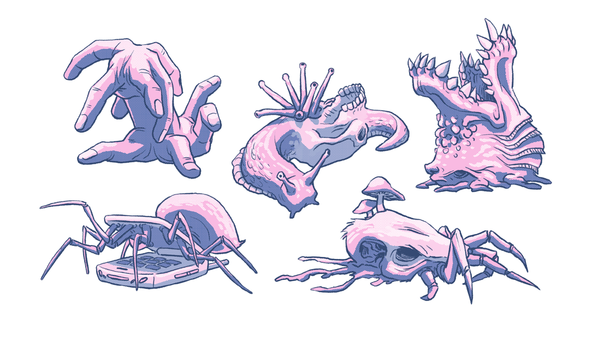 JM: These kinds of monsters, which are just meant to be spooky and creepy but don't necessarily have to "make sense" as real organisms, are lots of fun to design. Mostly because I can just throw stuff at the wall until something sticks. Like, spiders are cool, what is something that's extremely unlike a spider? Oh, maybe an old cellphone? But the legs come out from inside? Huh, yeah, that's kind of cool. Alright, what about a skull, those are creepy. Bone is hard and dry. What if it was fused with something squishy and slimy, like a slug? But upside down? And, oh, the hole in the skull that normally has the spinal cord, what if we add some more slug eyestalks to pull the elements together even more? Yeah, that's working for me. That's kind of what I'm thinking while creating these guys.

I use the "yes, and..." trick a lot for these kinds of monsters, and I try to use a lot of contrast between silhouettes, textures, materials, and organic/inorganic, while still working with the structures of each element to try to blend them together nicely. But the best part about monsters is you can create literally anything!

Of the monsters you designed, which is your favourite? Why?

JM: I love all of my horrific creations, but I think the fingers and thumbs thing is particularly fun. It's the most unsettling to me because it couldn't possibly be alive in the way we are used to in the real world. It also looks like the fastest of the bunch and I'd be pretty scared to see one racing towards me. 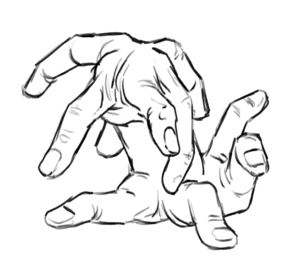 What do you think is the mark of a well-designed monster? Is there something you wish more people would do when designing monsters?

JM: Monster design is super specific to the story and setting. So to me, a well-designed monster is one that makes sense in context. If you think of two monster movies, and switch the monsters between the two, the stories either completely fall apart, or the monster becomes neither scary nor threatening. A story with zombies has completely different themes and plot points than a story about a shape-shifting alien. Or it should in my opinion, since I think the monster design and the story are inextricably linked.

I am particularly impressed with monsters that seem like they could be real creatures because the biology is so well thought-out. I also love monsters that are the opposite of that, where they are so alien and strange and unsettling that it makes me uncomfortable. My only wish is for more monsters of all kinds!

Braden, can you give us a little insight on how you went about designing this book cover? Did you start with a bunch of sketches and narrow it down? Or did you have a clear idea of where you wanted to go from the start?

BH: Okeedokee! Step one is super rough value thumbs (I do things a little differently these days, but this is how I did it for this cover.) I try to stick to three values, and make sure all the big shapes will read from far, far away. I think I did a couple more pages of these, but I can’t find them. 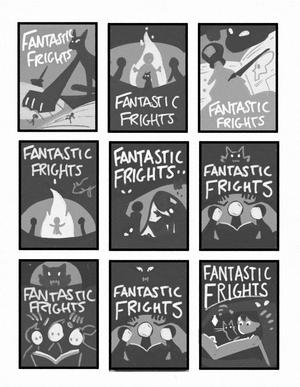 Then, (after running things past my super-awesome critique group,) I put forward my favourite (actually, my critique group’s favourite) options for Cloudscape to choose from. These ones are a little more refined, and I use a few more values. At this point, things were way way way way WAY too dark, but they still got the concepts across. Kitty cat featured in all of them. 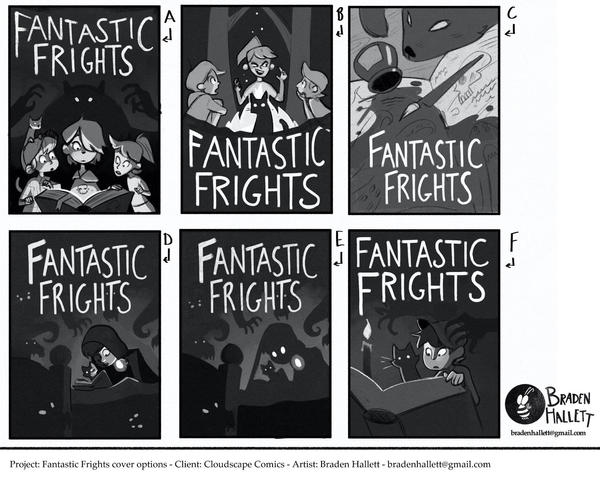 Step three (after Cloudscape picked their favourite and we decided it should be a wrap-around cover) was to refine things a bit and figure out the book blurb portion on the back. 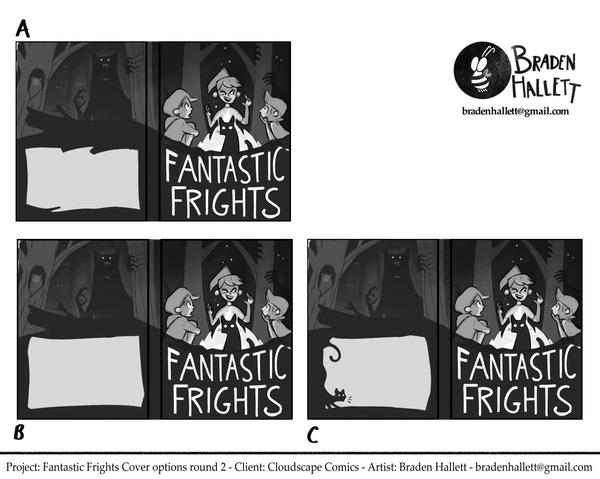 And THEN (my gosh I have so many steps…) I put forward a colour comp to make absolutely sure that everyone’s on the same page about how the cover’s gonna look. 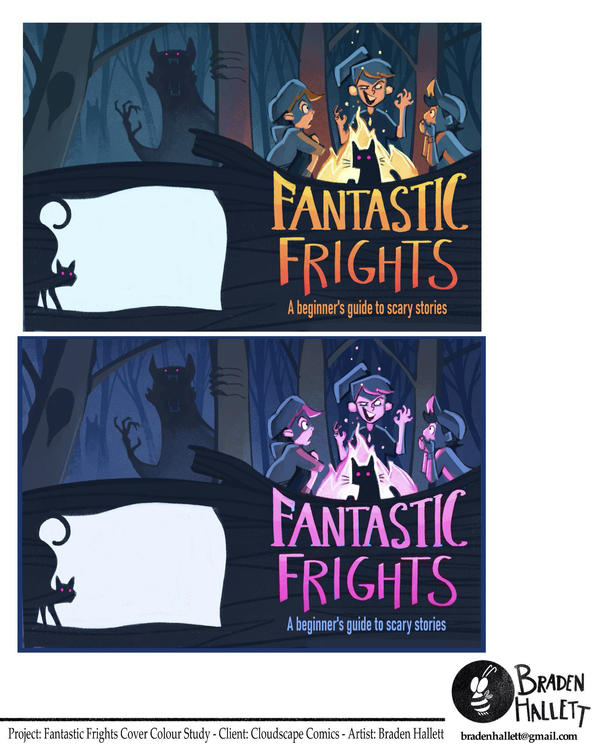 After that, it’s on to finished art! There were a few little tweaks and changes to be made here and there, but for the most part the cover was well-received!

What inspirations were you pulling from while working on this cover?

BH: That’s a really good question. I went looking for a ton of reference for the actual structure of the cover, but I can’t QUITE remember the particulars. I did notice that most middle-grade covers tend to use a handful of compositions. The big inspiration I drew on (apart from all the awesome references that Cloudscape sent me) is probably the old YTV show Are You Afraid of the Dark. You know, that classic scene of a bunch of kids around a campfire telling spooky stories unaware that their cat has sold them out to a troupe of werewolves and they’re about to be eaten alive. That cat is super duper sinister. That’s right. Super. Duper. Sinister.

The title is hand-lettered — what was the reasoning behind that choice?

BH: The reason behind the choice to hand-letter the cover is a hilarious combo of technical incompetence (I couldn’t for the life of me get Clip Studio to do what I wanted with the lettering) and trial and error where I ran a few dozen versions of the lettering past my critique group and they hated ALL OF THEM. Seriously. All of them. Eventually (after a friendly but no-nonsense crash-course in lettering from a friend of mine) this version of the title was good enough to pass muster. Let’s just say that this cover sure was a learning experience!

What’s your favourite part of the cover?

BH: It’s a toss-up between the evil kitty silhouetted against the fire or the evil puppy (were-woof) working its way through the misty woods. Ooh, also the trees. Those trees are super spooky with all their claw-like little branches. Also, I snuck in a character out of an old webcomic of mine. That part makes me giggle, too. Oh, and the expression on the girl’s face as she’s freaking out her friends with chilling tales. Or maybe they’re enemies? That’ll teach them to make fun of her braces! 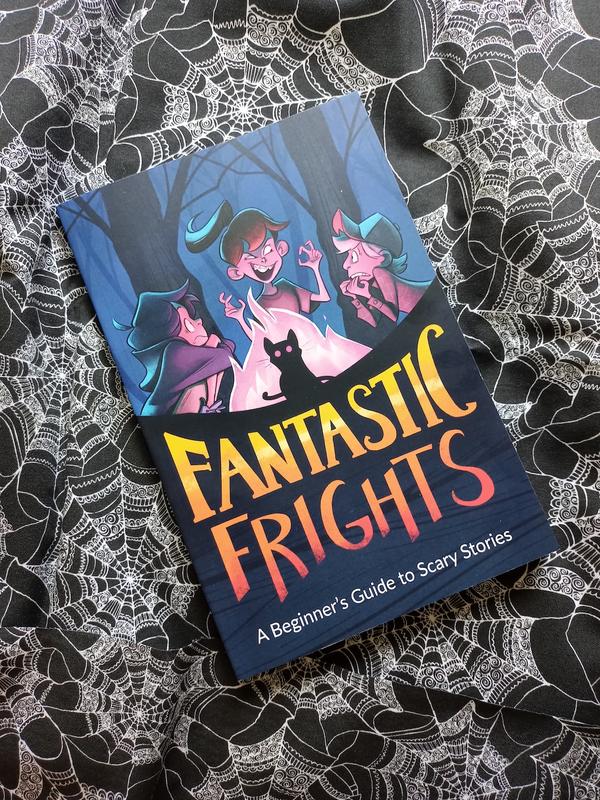 BH: It was SO MUCH FUN (after I got through the traditional step of tearing my hair out over how to make it look right) because it’s so different from what I normally do. I usually tend to go overboard with my colour choices so it was kinda nice to only be able to use a few.

JM: Ian (the writer) and I wanted a lot of detail in this comic because of the design of the city and the monsters. So the limited palette was challenging for sure. We really had to plan out how we wanted to use the two colours. We decided to use the pink to indicate something important or related to the Night City, so the switch over was even more obvious than just the appearance of the creatures.

Horror for kids is such a fun genre. Was this a genre you enjoyed as a kid? What were some middle grade horror books that stuck with you?

BH: Honestly enough, not really! I think I only read one horror novel as a kid (it was “okay”). Everything I read was sci-fi and fantasy. However, I really really really really REALLY loved silly horror movies and TV shows (Are You Afraid of the Dark and Goosebumps being common growing up, though never the Goosebumps books for some reason?). I think one of my favourite (awful) horror movies growing up as a kid was Critters. My gosh that movie was bad, but man was it ever fun! I suppose I’ve always been more of a person who likes adventure movies with horror elements. Thrillers, I guess. Honest to goodness HORROR horror was never really something I liked.

JM: Honestly, I don't think I read much horror when I was a kid! I'm not sure if I just wasn't drawn to it back then, or maybe there wasn't a lot of it available. There were Goosebumps books of course, but I think I was a bit too scared to read most of them, the covers were too spooky, haha! I kind of just read anything that sounded cool to me. I loved stories about kids with powers, or who were caught between two worlds. So sometimes I'd end up in the horror genre while looking for books like that.

One book series I loved as a kid is The Keys to the Kingdom by Garth Nix. I don't think it's categorized as horror, but I always found it pretty dark and spooky and I loved that.

Many thanks to Braden Hallett and Jade McGilvray for this deep-dive into the covers and critters that make  Fantastic Frights such a perfect addition to any kid's bookshelf this Halloween season! 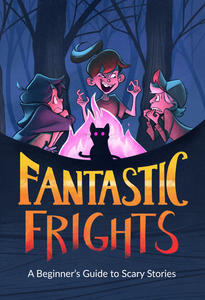 February 5, 2020
Beautiful Books: Has the World Ended Yet?