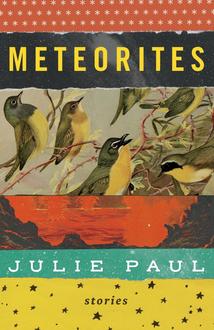 We've been known to swoon over Tree Abraham's book cover designs ( exhibit A) and her newest vision for Julie Paul's short story collection  Meteorites (Brindle & Glass) is no exception. Read on for our interview with Tree on her approaches to design and how atmosphere is top of mind when working on collections.

All Lit Up: You have designed some very striking covers. How do you approach a new cover design? Where do you start?

Tree Abraham: I begin with any available text. Whether that is the full manuscript, the sample chapters written thus far, or the brief notes provided by the editor or author. I am mining the text for imagery that will inform cover concepts. I also need to be able to hear the voice of the book to start to situate the design in addition to any competitive titles provided as examples of style. From there, I do visual research, build mood boards, and sketch out rough ideas. Of course, if the cover process carries on for multiple rounds (as this one did), new directions become chanced wranglings of my inner haphazard chimeras onto a blank page. Cover design requires a balance of commercial sensibleness and artistic madness to achieve approachable intrigue.

ALU: Is there a particular challenge in designing a cover for a short story collection instead of a novel?

TA: I instinctually approach essay and short story collections differently, even though this is rarely reflected in the winning design. Personally, because collections are motley, I gravitate toward layouts that are multi-sected in order to feature symbols from several works in the book. Some collections don’t have an obvious through-line, especially one that can be illustrated, so the design must focus more on conveying an atmosphere. In this case, the collaged strips are used to hint at the motley brought together inside.

ALU: What elements struck you about the story? Did you end up incorporating any of them into your design?

TA: Meteorites is about ordinary puny characters, like all us humans, being mighty in the face of the large rocks life throws at them. There’s a line that goes “the air feels like its made of glitter.” We are all but tiny shiny particles on a vast planet. In the short story “Clutter,”  there is a character reflecting on a world map left by her ex in the living room. Pondering love, the character “started to feel like my body was made up of bits and pieces, like I might break apart into islands.” She fixates on the islands of land all floating in the ocean apart and she so wants to stitch them together—stitch all the continents back into one whole beautiful island. In "Meteorites,” a meteorite might have entered the atmosphere. A character thinks of “their little town, nearly struck by a giant chunk of rock, hurled from space!” The group of friends go looking for it, star hunters they become. Paul stitches the mundane microscopic details of everyday with the big feelings imposed on us by the universe. There is a yearning to connect all the little bits together to make us whole. My design might not illustrate such ideas, but Paul’s words do, and they floated about as I worked.

ALU: Did author Julie Paul have any directions for the cover?

TA: The publishing team and author provided suggested imagery from the interior (animals, lava, stars, Goodnight Moon, many others…) as a jumping off point, but after that it was up to me to interpret the text.

ALU: Were there any other contending cover ideas for this book? If so, how did this design win out?

TA: I designed several rounds of covers for Meteorites. There wasn’t any clearly wrong thing about any one of the killed covers, it was more a general lack of consensus from the team about which felt right. The publisher was initially quite keen on having a central object, and there are many in the book, but none felt both memorable and animated. They wanted something pretty, bold, ALIVE. It was suggested to explore outer space visuals which for me always felt at odds with an actual meteorite because technically it is the debris from a space object once it strikes the ground of a planet—it is no longer a shooting star out there, but an inert chunk of rock down here. The final design juxtaposes enough fragmented moods to satisfy the visions of everyone involved in the approval process.

Thanks so much to Tree Abraham for this candid look at her process, inspirations, and earlier drafts of the cover for Meteorites! Thanks also to Tori at Brindle & Glass for making the connection.