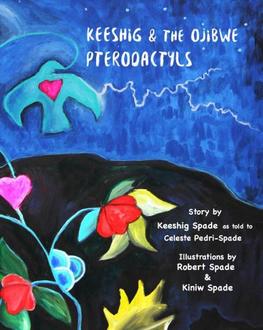 In Keeshig and the Ojibwe Pterodactyls a colourful, beautifully illustrated children's book from Kegedonce Press, Keeshig, a young Anishinabe boy visits the shores of Gitchee Gumee with his mother where their teacher, Nanaboozhoo, presents himself as a mass of land. Keeshig tells his mother about what he calls "the Ojibwe pterodactyls," the thunderbirds that are the heartbeat of Nanaboozhoo. Scroll on to enjoy some of the artwork from the book and to learn more about each of the paintings.

Keeshig and the Ojibwe Pterodactyls is the story of a young Ojibwe boy (Keeshig Spade) recounting a story and sharing his imagination with his mother as they spend time down at the lake shore visiting with Nanaboozhoo (The Sleeping Giant). The story is assembled as a beautifully colourful children's picture book, with illustrations by Keeshig's father, Robert, and brother Kiniw. The book is coming this month from Kegedonce Press. All of the original paintings in the book are acrylic on canvas. They were created over a six-month period by Robert Spade with assistance from his five-year-old son Kiniw to visually complement the story, Keeshig and the Ojibwe Pterodactyls, developed by their older son and brother Keeshig. Robert has been painting in a contemporary Ojibwe woodland style for over 20 years and since he was two years of age, Kiniw has demonstrated a great love for painting and drawing as well. He is part of the children's art community in Sudbury where he attends school, frequenting many art classes at the Art Gallery of Sudbury (AGS). Just recently (December 2019) he won an award for his artwork that was exhibited in the Creative Kids Exhibition at the AGS. 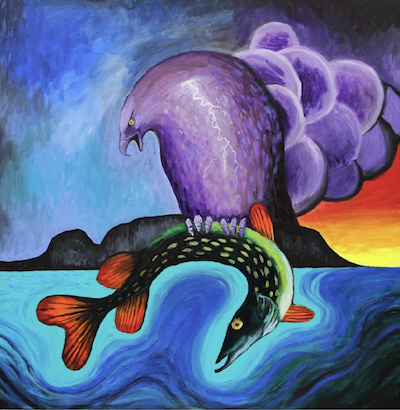 In his oral story, Keeshig described this image of what he described as an "Ojibwe Pterodactyl" looking for food near Nanaboozhoo (the Sleeping Giant). When he told his father Rob this, Rob started to sketch out what Keeshig was describing. To Rob, this translated as a large thunderbird soaring over Gitchee Gumee (Lake Superior) similar to the way an eagle or other large bird would swoop down over the water to grab its prey. Rob knew his sons had witnessed this many times every summer when they fished together out on their traditional Ojibwe territory and he wanted to paint something that his sons would recognize/relate to. 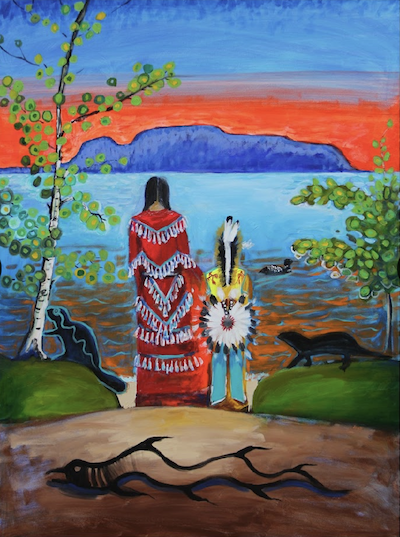 This painting is the first illustration in the book because it grounds the story. The mother and son are in their powwow regalia. Again, this is a familiar summer scene to many Ojibwe families because many mothers, children, fathers, etc., go to a lake to cool off in after dancing a long afternoon session at a traditional powwow. Rob chose to paint the mother as a jingle dress dancer to honour his partner and the women in her family who dance jingle, which is a healing dance for the people. The painting also reminds us that the water is a healing medicine and spending time visiting our sacred places is important to our way of life as Ojibwe people. 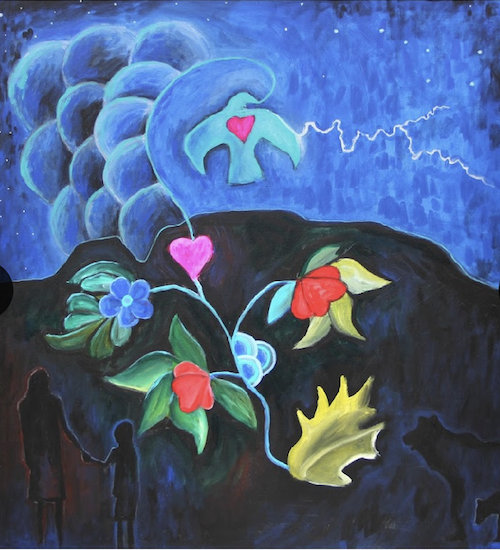 Heartbeat is one of the last illustrations in the book, and is also on the book's cover. Rob painted this to complement the part in the story when the mother tells her son that he and his siblings are, in essence, her heartbeat and that they make her so happy and thankful. This illustration somewhat encapsulates the main spirit of the story, which is not a Nanaboozhoo story...it is not based on any traditional story. It is a story of a young boy and how he sees his present day world in relation to his Ojibwe culture and his relationship with his mother. Thus, this is a story of Ojibwe kinship, land, and family. This illustration communicates the idea or teaching of looking after life and one another. It depicts the loving bond between a mother and song and the love and appreciation a family, and a Nation of Ojibwe people, have for their teachings, values, land, and way of life. 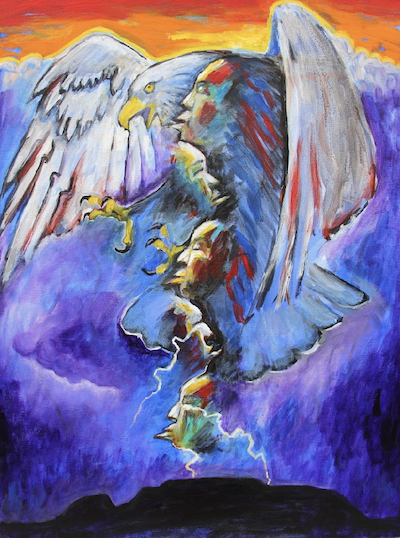 This illustration depicts the part in the story when the young boy, Keeshig, tells his mother that he thinks that when we hear thunder approaching in the sky, that the loud rumble we hear is the thunderbird beating its wings in its chests. In this painting, Robert wanted to honour the Great Spirit, Kitchee Manitou, and the presence of his family's ancestors who have made their journey to the Spirit World. During the production of this painting, Robert was reminded of some of his family's Elders and family members who had recently passed away and the strength of their teachings that would remain with his sons. This painting reminds us of how life and creation is a great mystery full of many sunny days and many thunderstorms but through it all, our ancestors and the Creator are always there, helping us along the way.

Thanks to Patricia Campbell at Kegedonce for sharing with us these beautiful images from  Keeshig and the Ojibwe Pterodactyls (Kegedonce Press), available on All Lit Up December 15th. Click here and we'll send you a reminder email when it's available for sale. For more Beautiful Books, click here. 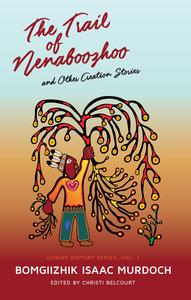 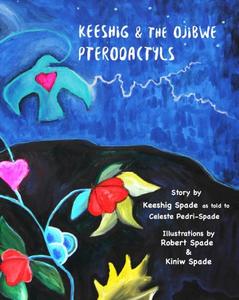