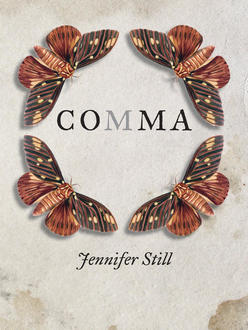 Healing and transformation are central to Jennifer Still's  Comma, poetry borne of her brother's long illness. Jennifer wrote poems by his bedside, punctuated with her brother's own written guide to prairie grasses, her embroidery, and, of course, commas. See the original scrolls in Jennifer's post, and how they became a book, below.

“I wind the scroll around the room. One end goes on to meet the other. Harking back as if history were something carried forward or cyclic, with a twist in the end. A fog drifts off the bay. A tuft of hair under his bed collects. His breath curls in the tube. A chrysalis.” —Jennifer Still, Comma

A comma is more mark than word. More breath than mark. Its Greek origin refers to “a piece cut off”, “a short clause”.

The graphic curl we use today is what’s left of the original mark, a diagonal slash “ / ”, or virgula suspensiva, meaning “rod” or “wand” or “twig.”

My book, Comma, is more shape than word. In the background, a coma floats — the faint image of my brother flickering in and out of consciousness for seven months under a white sheet. Cut off from his breath, he is a fluctuation, a process, a pause, and a shape — the rhythmic rising and falling of artificial ventilation.

His mattress is composed of sequences of tiny air pillows. They caterpillar up and down his back, inflating and deflating, so that no one point is pressured.

As everything falls away — his nails, his hair, his voice — everything holds.  The comma, curled out of itself, is a scroll, a bedsheet, my page. It is a curtain, a cocoon, morning lake fog rolling off the bay; my brother’s eyelids, seven months drawn, peeling. 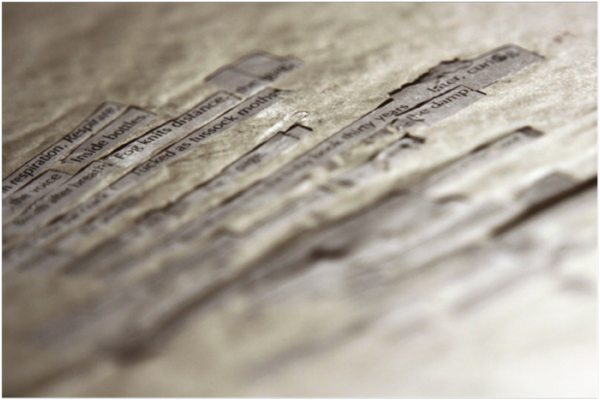 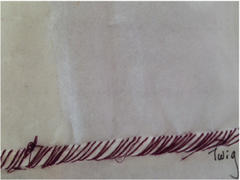 There is a breath mark, a scar in the shape of virgula suspensiva, a twig, at the dip in his throat. Once, when he was in a coma, my hand bumped against the shocking hardness under his chin where the tube ran inside.

When experience moves out of language, all the sensual laces of the world — shapes, tones, patterns, shadows, textures — rush to the page.

Once, observing a chrysalis, I felt that same shock, when its dark casing heaved.

Ethiopian healing scrolls have been used for the last 2000 years as a medicine. Sacred imagery and textual prayers were interwoven over a sheet prescribed in the length of the body of the person they protected. 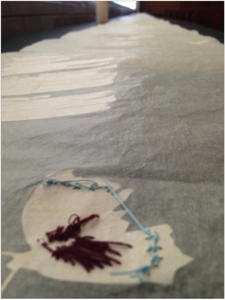 “The motion of moving through the piece is actually the work.” –Anne Hamilton

I am inside the page listening to the air rush through the tube, watching a small patch of fog conceal and reveal his mouth.

The scroll channels air. Rolls up into a reed, a whistle, a stem. The poem, as I shred it, ribbons around the room.

There were straps around his wrists that the nurses called reminders. It scares me. The words we use to unsay what we most know. 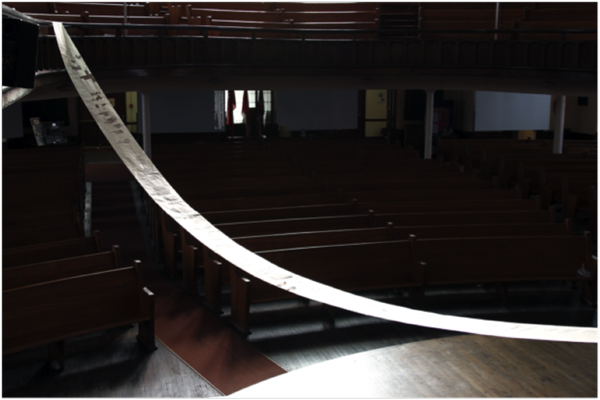 I wanted to step back from my words and see the big strokes, the way a painter steps back from a canvas to see the colours. I wanted one whole view of the poem, to see its patterns, its connections, its drifts.

“I’m not led by my intellect. It’s something more primal,” says poet Yoshimasu Gozo. “I’m driven by the impulse to wrest something from the words I encounter.”

My brother’s chart was held in a box on top of the cupboards, overflowing.  When asked if he would heal, the doctors said “he’s writing his own story.”  I cut it up, stitch it, flip it, shake it off. The poem, on its long page, begins and begins. 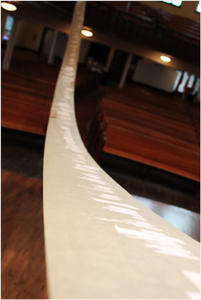 The scroll might be a way to catch what Gozo calls “the palimpsestic experience of living.” To liberate the poem, for a moment, from its dusty equation: page = binding = book.

I wondered for a long while if Comma was meant to be held in any static way at all, or rather left unbound, to roll and unroll, as it was made, in and out of view.

In the end, rather wonderfully, the typeset pages rejected folios. Page numbers just wouldn’t fit. So the book remains one long page after all, the scroll there at its core, refusing to be parsed out in any linear measure.

I hang the scroll from my porch and fill it with light. Words — flickering back into their dark dashes, their tones, their crimps — are no longer words, but the ladder to words.

Gozo says it took 40 years to learn that what he was doing in poetry was “causing language to wither.”

The poem I’ve made, slotted over the page, is more incision than voice.  The comma says something has come before, something will follow.  The tracheostomy, the cut-up, the mark, the scroll, they all open to a wider breathing.

Thanks so much to Jennifer Still for sharing the story and gorgeous artistic inspiration behind Comma, as well as Hazel at BookThug for making the connection. For more books that look as good as they read, check out Beautiful Books, here. 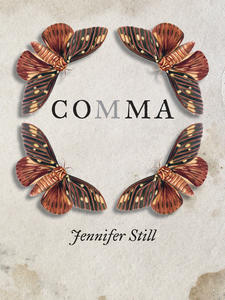 December 22, 2018
Poetry in Motion: Strength and Repair in Beth Goobie's breathing at dusk

September 13, 2016
Beautiful Books: Gary Barwin on the Synergy Between Writing and Designing