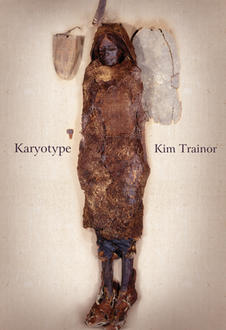 Last week we included Karyotype, the debut collection of poetry by Kim Trainor, as part of our new year's resolution to read more new, emerging, diverse voices. Not only did the content of this collection — an investigation of human values and culture through the physical — catch our eye but the cover image was so striking, we had to know more. We asked Alayna Munce, editor and production manager at Brick Books, to share with us the story behind the unique cover image. As a bonus they included an excerpt from the collection, too!

Last week we included Karyotype, the debut collection of poetry by Kim Trainor, as part of our new year's resolution to read more new, emerging, diverse voices. Not only did the content of this collection — an investigation of human values and culture through the physical — catch our eye but the cover image was so striking, we had to know more. We asked Alayna Munce, editor and production manager at Brick Books, to share with us the story behind the unique cover image. As a bonus they included an excerpt from the collection, too! 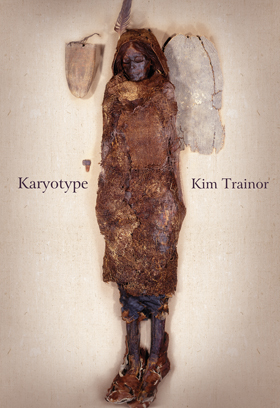 When we began production on Karyotype, Kim Trainor and her editor, Don McKay, very clearly requested that the cover feature one of the Mummies of Ürümchi, which had been so important to Kim in the writing of the book. It took a bit of work to track down Jeffery Newbury, the photographer, but once we did he graciously granted permission to mock up two of the mummy photos that are referenced in the poems—one of a woman, and one of a child. In the end it was the image of the woman, the Beauty of Loulan, that spoke most poignantly to the spirit of Kim’s intricately insightful and compassionate book.

Here’s Kim reflecting on the image:

“In the original photograph, she lies against a stark white background, as if her body and the belongings found with her in the grave have been placed in a white enamel dish. She wears the clothes she was buried in—a simple brown tunic, with the hood drawn over her head, and a feather attached to this. To the left of her head is placed a small woven bag that contained some seeds. To the right is her winnowing basket, flattened out and ragged at the edges. The effect of the placement of these two artefacts is that of torn wings. A comb with several missing teeth lies at her right hip.

“It was this photograph of the Beauty of Loulan, a colour plate in Elizabeth Wayland Barber's The Mummies of Ürümchi, which first crystallized for me the title sequence of my collection,  Karyotype. Her body, her DNA, and her clothing, offered a way to begin to think about the ephemerality of our genetic and cultural texts. It is only because of the cold and aridity of the Taklamakan desert that her body was so perfectly preserved. Her presentation against a brilliant white background, as if a specimen in a dish, also visually symbolized how she had been objectified and pursued by scientific inquiry.

“My feelings about this image are complicated, therefore, because the photograph documents the culmination of her excavation and removal from her grave, where she had lain for almost 4000 years. Her body was tested in so many ways, from her mitochondrial DNA to the weave of the cloth she wore. There are political dimensions at work here also: she has been claimed as an ancestor of the Uyghurs, an ethnic minority group residing in the Xinjiang ("New Frontier") Uyghur Autonomous Region in China. The Uyghurs live in the Tarim Basin where her body was found and they want the Beauty of Loulan removed from the museum where she is currently displayed, and returned to her burial ground. The image presents her vulnerability, and I think by extension the vulnerability we all feel as humans who are in the end material bodies subject to time.”

They peel her desiccated beauty—
soft-petalled husks of chestnut brown,
her skull in its silken pod—tease

open the parchment skin to flesh
stitched through with blue-dyed veins and pearls
of bone. What are they looking for

in their protection of white mask
and gown? I sit next to my daughter
who turns her face from their grim task

but I look, and my son looks too
into the Beauty of Loulan
preserved in our luminous blue

glass capsule, with all the others—
the Cherchen man, the toddler
with a flat stone on each eye,

the man sewn up with horsehair sutures
at his slender neck. Microscopic views:
white blood cells smeared across a slide

stained with Giemsa dyes, methylene blue and
azure A, B, C to show
the chromosomal bands of dark

and light. We watch this
in the dim twilight of our den,
my own small band of humans

interred. Pliny the Elder wrote
of “Serae” with flaxen hair and blue eyes
who made an uncouth sort of noise

by way of talking. We watch bright
threads of her DNA unwound
and read from left to right

and learn her history. But where is she,
in the blue-stained karyogram,
this desiccated woman

this Beauty of Loulan, this beauty?

A word tries to work its way through
her mouth dried wide open in death,
past the circlet of broken teeth

and the swollen tongue that filled the gap
in her dried seed head.
But she is all stitched up—

her lips fine strings that draw her taut,
her skin still delicate
tapestry of threaded gold,

finely lashed seams that close each lid
and braids that bind her skull.
Only the dark red chin strap failed

to hold her closed, so her mouth gapes
in death. And I would hold it closed
for her, and gently seal her lips

but for this word she’ll never speak.

I peel back ivory leaves,
bone petals, to the bruised image
of this Beauty

Her scorched face slips through
the split chestnut hood
and cusp of fur.

Twig legs pierce the split husk
of her. She is becoming new,
some other thing that moves through

what she once was. I study her
closely through the long afternoon
as the rain pours down,

glancing up to trees skinned with moss
in the green flickering gloom,
a castle's ruins strewn

across the living room floor.
But always back to her dark form.
What am I looking for

a genetic script of unfurling blue?
There is no sequence
that can describe her.

No karyogram
to take the imprint
of this woman.

But still we scrape off letters
from her parchment skin,
which she endures,

the chrysalis
scored and split
as she rises

Thank you to Kim and Alayna for sharing the story behind the cover of Karyotype, as well as the title poem from this wonderful debut collection! 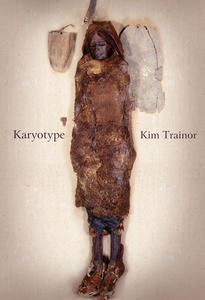