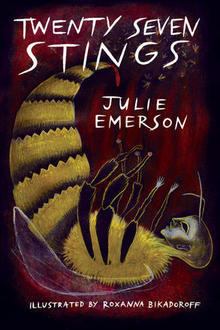 Roxanna Bikadoroff is the award-winning illustrator of Julie Emerson's new poetry collection  Twenty Seven Stings (New Star Books). She shares with us her process in illustrating this seventeen-poem suite on the nature of war.

Roxanna Bikadoroff is the award-winning illustrator of Julie Emerson's new poetry collection  Twenty Seven Stings (New Star Books). She shares with us her process in illustrating this seventeen-poem suite on the nature of war. 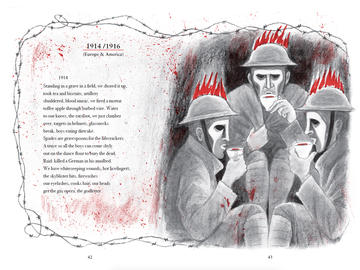 The first thing I do is read the manuscript through a few times, and see which poems trigger the most vivid imagery in my mind. I set aside the ones that don't, to re-visit later, once the wheels are in motion. It really isn't more than that, just  letting images flow from the unconscious. But just because something looks good in idea form, doesn't mean it will translate to the page. Illustrations like this tend to call for a graphic look and I'd first imagined them bold, flat, using ink, but they just didn't want to come out that way. I think the charcoal and greys gives them a more dreamy, time travelling feel, that is more in keeping with the prose. The eye moves along the contours and shades in the same way, drifting, rather than speeding. It's less expressionist and masculine – which is how we might typically envision war matter. But Julie's poems are not typical war poems.

This was the originally proposed cover. At that time, the title of the book had been Strategies. 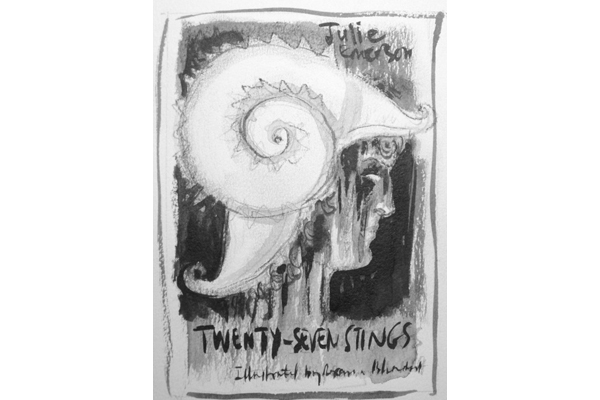 When the title changed, so did the art direction.

I did research for accuracy, but then drew from memory and imagination, so it doesn't look like I'm just copying a photo, rather compiling something new and surreal, metaphoric. For example, Alexander's helmet does not actually resemble the murex shell and nor would it be the sort worn by Macedonians (more a Renaissance thing), but it was more important to have this shape, to echo the waves and make the ocean seem an extension of his force of will.  As for his face, that was taken more directly from depictions of him on coins, and reading about him as a character. The Sun is the Macedonian Sun symbol.

On the left is Roxanna's final illustration of Alexander. On the right is the image with the text included (the red was added digitally).

Thanks so much to Roxanna for sharing how she came up with the art for Twenty Seven Stings, and for Mike at New Star for making the connection.

September 23, 2020
On compositional improvisation and Music at the Heart of Thinking: An interview with Fred Wah