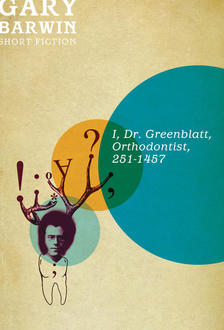 Beautiful Books: Gary Barwin on the Synergy Between Writing and Designing

I, Dr. Greenblatt, Orthodontist, 251-1457, Gary Barwin’s surreal collection of short fiction has a dream-like quality to it. The book’s imaginings, its sense of temporal and oneiric dislocation is tautly captured by the book’s cover image which was sketched by Gary himself. Gary’s sketch was subsequently turned into a vivid and evocative cover by Clint Hutzulak of Rayola Creative. Gary shared with us the inspiration behind his sketch and the interesting synergy between writing and designing.

I, Dr. Greenblatt, Orthodontist, 251-1457, Gary Barwin’s surreal collection of short fiction has a dream-like quality to it. The book’s imaginings, its sense of temporal and oneiric dislocation is tautly captured by the book’s cover image which was sketched by Gary himself. Gary’s sketch was subsequently turned into a vivid and evocative cover by Clint Hutzulak of Rayola Creative. Gary shared with us the inspiration behind his sketch and the interesting synergy between writing and designing. 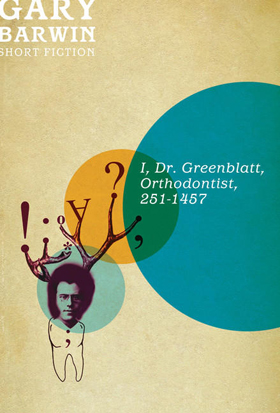 Who is Dr. Greenblatt and what is Gustav Mahler’s face doing on the cover?

I feel like I've achieved some sort of aesthetic victory as a result of your question: The cover features a character with a molar for a body, and that body has a semi-colon on it, and the head of that body has a large and amorphous cloud of dark hair around it, the hair surmounted with antlers from which are displayed punctuation and letterforms and all this seems unremarkable, a matter of course, because it's Mahler's face that you ask about. Win! But teeth, semi-colons, antlers, and Mahler are all part of the sign system, the iconography and multiplicity of registers and cultural associations and resonances that we can draw on when trying to locate ourselves in the world, when trying to make a joke (a molar, a punctuation mark, and a deer head walk into a bar...), or when we create writing. I like to mix registers: to balance the absurd with the touching, the funny with the sad, high culture with pop culture, the contemporary with the historical. To find the little wires that move the electricity through our culture.

There's a story in the book where the narrator says, “Last night I slept with the Tooth Fairy” (he notes that she's better than Peter Pan or Mrs. Santa in bed). After a series of transformative experiences (one of them in a Canadian Tire), he says “my arms have become like wings, their feathers the feathery pages of the telephone book, opened to page 247, Dr. Greenblatt, Orthodontist, 251-1457.” And so, that's Dr. Greenblatt. An orthodontist, but a near visionary figure that appears when the surface of reality wears thin and shows its iridescence beneath. This particular preternatural apparition is an orthodontist because they move teeth. They look inside you with little mirrors. They make machines and sculptures for the inside of your mouth. That’s magical.

Interestingly, you sketched the cover art for I, Dr. Greenblatt, Orthodontist, 251-1457 yourself. Are you wont to doing your own artwork or was this an exception?

I do lots of visual work and I’m a bit of a wannabe illustrator so it’s always a thrill to get to appear on covers, something which has happened quite a few times. I’m often more excited about that than all of those words of mine which just drone on and on inside the book. Actually, I enjoy being involved in the cover design because it’s a fun opportunity to get to play with images related to the text and get to work with the expertise of the editor and the designer. I love collaborating (and I've done quite a few collaborative books and even several fully illustrated books.) I do tend toward gesamtkunstwerk—multimedia work. In other words, I can't help getting in on the action and creating words, art, and even music for the pieces. I've created videos with images and music for many of the stories in Dr. Greenblatt. Some humourous, some full of pathos. (A few examples include: “Parliament”, “The Hand”, and “The Sleep of Elephants”.)

I'm really grateful for how expert designers such as Clint are able to put everything together as he did for this book. He took my little black and white image and turned it into this very appealing book object by thinking about colour and texture. Book size. Paper. The Venn-diagramish circles. The choice of fonts. What turns a text into a book which has a physical presence. Which is great to hold in your hands. Which invites you to open it, to develop a relationship with it. To take it out for dinner and confess your desires to it. Ok. Maybe not those last things, though when I get a new book of mine, I am tempted to put all the copies on my bed and roll around in them. But maybe I should have kept that a secret.

Salman Rushdie had said that sometimes even a single sentence can set him off on writing an entire novel. Does that extend to art as well? Has art ever spurred you to write?

Absolutely. All the time. I’m inspired by all sorts of art. The tactility of physical objects. The heft of colours. The syntax of texture. The grammar of shape. The waves and particles of design. In a way, it’s the reverse process of what I said about book design. In working from art, I’m finding words to convey the shape and energy of the visual.

There’s a sequence in Dr. Greenblatt, “The Punctuation of Thieves,” based on reading punctuation visually and seeing what associations and stories emerge. For example, “A hidden comma, like a seahorse curled in the mind.” Or the asterisk: “Small star. Asshole. Firework burst. Cobweb scaffold, the spider gone.”

It seems natural to me to work from other art forms. I see our senses, thoughts, and perceptions as rhizomatically connected. I guess our brain is a big root system, but a system that is connected with the world around us, both real and imagined.

There are some interesting color choices in the book design — the cover is colored this enamel-like shade which seems to comport well with the word "orthodontist". Can you shed some more light on this?

I love the synaesthetic feeling that recognizes that certain shades go well with certain words. Orthodontist? You’re right. The cover shade works well with that. And there is something very organic to it—a certain hue of a certain kind of flesh tone. Or kind of pasta-coloured. I like that.  Quite reassuring, I think.

Do publishers and writers have certain ideas about how the book should look like?

A piece of writing has a kind of conceptual shape or energy in literary spacetime and the goal of the design is to render that in a physical and graphic way. There’s a synergistic energy between the elements of the design. Size, shape, colour, texture, font, image, etc. It takes great finesse to figure out the best way to balance all these elements to realize an effective and communicative design. Like working with a good editor, working on a cover can be a satisfying and creative experience, full of surprises and inversions of expectations. It works best if I’m open to new ideas. They’re often different than my initial assumptions, but I like the feeling of learning to be open to a new way of imagining something.

The book design has to take into account the language of the world the book will enter: the potential reader, the eventual reader, the publisher, the bookstore, the salespeople, the online image, the advertisements, the press’s overall “brand,” the author’s mother. And it has to have an energy and charisma of its own. Maybe design is like translating the text into another language. Or maybe it’s like playing a duet. The design is the other members of the band. I’m thrilled how I, Dr. Greenblatt, Orthodontist, 251-1457 turned out.

Of course, the book has to have a good spine, good back cover copy and energetic layout, and, naturally, an appealing front cover. The author, publisher, editor, and book designer work together to achieve all those things. To quote one of the book’s epigraphs, as James Brown says, “Hair and teeth. [You] got those things, [you] got it all.” 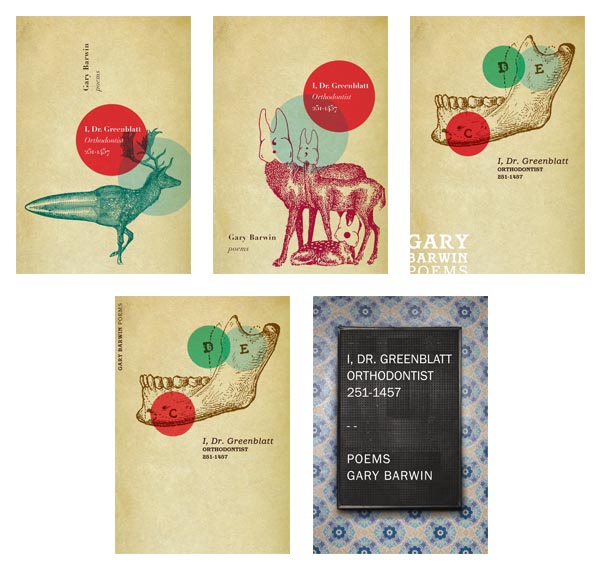 Some of the earlier drafts of I, Dr. Greenblatt, Orthodontist, 251-1457 by Clint Hutzulak.

Thank you to Gary Barwin and Anvil Press, especially Nitant Narang, for sharing this behind the scenes look at the making of the cover of I, Dr. Greenblatt, Orthodontist, 251-1457. 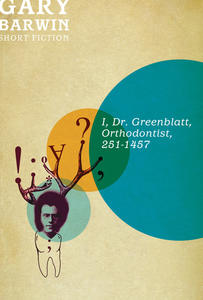