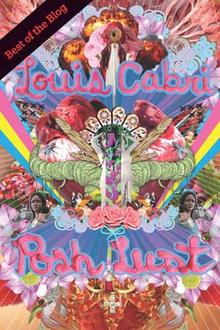 Beauty is in the eye of the beholder, or so they say. Today’s Beautiful Books column embraces the “maximalist” look with Posh Lust by Louis Cabri, published by Vancouver’s New Star Books. Designer Oliver McPartlin takes us through the process of creating a cover that would grab your attention.

Cover design is one of those publishing topics I could read about forever – I’m always fascinated by the creative process behind each one: the initial design brief, the concepts that didn’t fly, the discussions (or heated disagreements, as I’m prone to imagining them) that ensued, the practical considerations, the refinements, and the little details that survive, or better yet, return. I like to think of the final image as a palimpsest, reflecting a convergence of each iteration.

In this "Beautiful Books" column, there is a lively account of operating under ideal creative conditions to create the cover of Posh Lust: aesthetically challenging poetry, a designer who finds inspiration late at night and in a beef heart, and a publisher who encourages him to “keep going.” (Also, it contains the words “tush slop,” which I suspect will bring the All Lit Up blog some interesting search referrals.) As with Cabri’s Flarfist aesthetic, you don’t necessarily need to be aware of the technique to appreciate the end result, but it’s oh-so-fun to be in the know, and privy to the design goal of “Karl Lagerfeld tied up and abused by William Burroughs and Hannibal Lecter in a Ralph Bakshi cartoon of a peyote-fueled S&M session. But, you know, fun.”

I also recommend checking out Posh Lust’s back cover (which you can see on McPartlin’s website), where the theme of "gaudy excess" carries through to the book’s barcode. (And -- plug time! -- while you won’t get to witness an employee’s confused attempt to scan the book when you buy your copy on All Lit Up, it’s a delightful customer service experience from start to finish.)

Beauty is in the eye of the beholder, or so they say. Today’s Beautiful Books column embraces the “maximalist” look with Posh Lust by Louis Cabri, published by Vancouver’s New Star Books. Designer Oliver McPartlin takes us through the process of creating a cover that would grab your attention.

*
The initial discussions about this project heavily emphasized the idea of tacky, gaudy excess. The term “maximalist” was used more than once, and I seem to remember mentions of Arcimboldo. Food as a motif was part of the process from the beginning.

At first I resisted, acting on the standard, designerly urge to seek out a simpler solution. The colours could be jarring and garish, the concept would strive for cognitive dissonance, but the execution would be sparse and uncluttered. A few early mockups played on text and colour — words laid over top of one another and arrays of anagrams of the title itself, as in version 1. (I had high hopes for Tush Slop, Slut Shop, and Lost Push...) 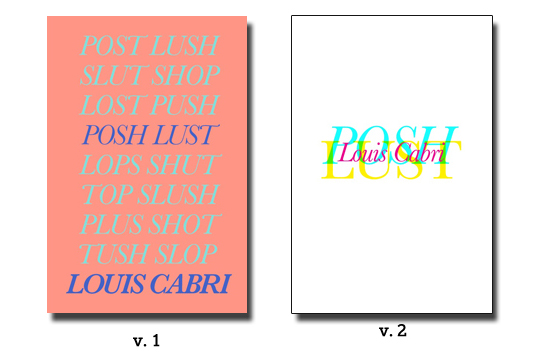 I played with the hoary typographical tropes of Haute Couture publications, which are always the first thing I thing I associate with Gaudy Excess. We were getting close (see version 2), but simplicity was not quite getting us there. Back to Arcimboldo — back to maximalism.

I think we all had the same direction in mind, but couldn’t quite picture it. Karl Lagerfeld tied up and abused by William Burroughs and Hannibal Lecter in a Ralph Bakshi cartoon of a peyote-fueled S&M session. But, you know, fun.

It all began to come together when Rolf had the idea of meat with cake icing on it. All credit goes to him for that. It took a few tries, but that simple and off-putting juxtaposition was really the genesis of this final monstrosity. I bought some icing for the lettering, took some photos and began with some rough mockups in Photoshop: icing on a slab of steak, on a beef heart (version 3).... We looked at other options too: icing on dirty pavement, on a crumpled page from an old nudie mag. 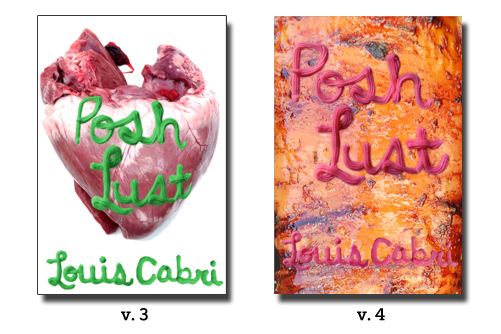 We decided we'd do a photo shoot of a table set for a feast, with a roast as the centrepiece, again with author name and title in sickly pastel icing (version 4 is a mockup of the planned photo). We were excited to do it, but one night, with that plan still in place, I idly began playing with all the photo reference material I had accumulated along the way. 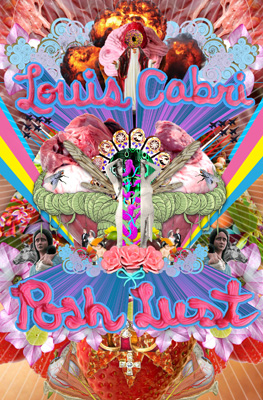 When I gather materials for a project I cast a pretty broad net, always sticking to Creative Commons or public domain materials, just in case. There were a lot of meat photos, both raw and cooked. Candy, flowers, cakes, fruit — anything that could have been associated with decadence.

I started piling them all into one document, masking out backgrounds, oversaturating colours, adding in some fragments of my own illustrations — a picture was coming together: a sleazy, off-putting, quasi-religious cornucopia of indecency. By 3 a.m. it was close to its final state. I sent Rolf an email to the effect of “Hey, so I know we had a plan in place for this, but I’ve kind of gone out on a limb here just for the hell of it — let me know what you think.” The reply I woke up to the next morning was a one-liner: “Oh, yes — keep going.”


A few tweaks here and there, and we had the final image, in all its depraved glory: version 5.

Thank you to Oliver and New Star Books for sharing this attention-grabbing cover with us.

February 4, 2021
Beautiful Books: For It Is a Pleasure and a Surprise to Breathe