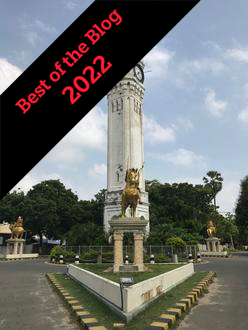 In observance of Tamil Genocide Education Week in Ontario, translator Geetha Sukumaran shares a conversation with Tamil poet Ahlian (her translation of his book, Then There Were No Witnesses, was published in 2018), about the Jaffna Clock Tower as a conduit of childhood memory, a symbol of colonial rule, and a witness to destruction.'

Clock towers signaled to British and native alike the self-identification of the British as an imperial people.

While I was working on my translation of the second volume of Ahilan’s poems, the poet and art-history professor and I had a long conversation one afternoon about historical landmarks becoming witnesses to time. Ahilan shared with me the history of the  Jaffna Clock Tower, his own memory of the monument, and his recollections of the violent recent past. His poem “Munthai Perunagar” (“The Great Ancient City”), which I had translated some time ago, speaks about the several pasts of Jaffna in which the clock tower plays a significant role. I asked Ahilan: Why the clock tower?

Ahilan begins in a soft tone. Let me first explain the history and the architectural beauty of the tower. In the early 2000s, I saw a thick, long hard-bound book titled British Period Architecture in Sri Lanka by Lakshman Alwis in Colombo. The price of the book was too high for me to afford and yet I managed to buy it because of my passion for the architecture of Sri Lanka. However, I was horrified to find out that the book deliberately omitted the British monuments in the north and east of Sri Lanka, the regions with densely populated Tamil communities.

Heritage property refers to the historical places, buildings, unique cultural productions, knowledge systems, and natural resources that are inherited from the past and remain as traces of the past. Colonial heritage is one of the predominant features of colonized countries like Sri Lanka, and it symbolizes the tension between the colonizer and the colonized, bringing up issues such as modernization, imperialism, and nationalism, cultural appropriation, hybridism, and interconnection, and involving as well material, geological, and climatical conditions. Richard Salamé [in his 2014 paper “Clocks and Empire: An Indian Case Study”] identified the clock as a deeply embedded symbol in 19th century British culture. It was taken to India as part of the colonial project to proclaim imperial power on the native soil and in the “time politics” of the British Raj. The clock tower in Sri Lanka is not only a symbol of imperial power in the colonial era but continues to be prominent in public spaces in the modern postcolonial period in a different political context.

Ahilan pauses for a moment before continuing. The clock tower of Jaffna is one such important construction within this colonial history. Compared with other (colonial and postcolonial) clock towers in different regions of Sri Lanka, this one is unique in its architecture and aesthetics. Unlike most clock towers built by colonial powers or the state, this clock tower was funded by the people of Jaffna to commemorate the Prince of Wales (Edward VII)’s visit to Jaffna in 1875.  It was built during the period of Sir James Longden’s appointment as the 15th Governor of British Ceylon (1877–1883). This remarkable clock tower was designed in 1881 by James George Smither (the first government architect in the Public Works Department in Ceylon, 1865–1883) in the  architectural style known as Indo-Saracenic. This revivalist style is a hybrid of Oriental and Western architectural and cultural designs and was used by British architects, especially in public and government buildings in India in the late nineteenth century. It primarily drew stylistic and decorative elements from the Mughal and Hindu architectural and western Gothic and neoclassical traditions. The crowning onion dome and multifoil arch (known as a cusped arch, polylobed arch, or scalloped arch with horseshoe arches) are used as fundamental architectural elements.

The tower was severely damaged in the late 1980s by the civil war. When Charles, Prince of Wales, visited Sri Lanka in 1998, he offered British assistance in restoring it. The British government donated Rs.1 million and the renovated tower was reopened on 19 June 2002. The clock is a representation of the interaction between British colonial power and the people of Jaffna in terms of agency and negotiation.

He inhales deeply as his informative tone becomes nostalgic and he continues. In my childhood days, my grandfather would refer to Jaffna town as Periya kadai (“the big bazaar”). To me, in those days, Periya kadai was magical. The area generally known as Parangi theru created an imaginary world within me. There were traces of the Dutch period in Jaffna—the long streets that did not bend, the side streets, Dutch-style houses, shops, the Dutch fort—all spread out in that large area in which the British clock tower was the most significant landmark. In my childhood, it was a magical structure enveloped by nostalgia and the pride and glory of the past. Then, in 1981, like a morning dream, everything collapsed. The tower became a victim and a witness. It watched those who set fire to the Jaffna library; it saw thousands of books and palm-leaf scripts burned. The fire and smoke from the library shrouded the tower.

A few years after that, the tower turned into the centre stage for the battlefield of Jaffna. The Pullukulam (“algae pond”) became a marsh. The rebels built their sentry points near the tower, which became a witness to all of this. The shells flew on top of the tower and landed in the hospital, turning it into a bloody, murderous place. I still remember the bomb that penetrated the walls of the clock tower. The clock stopped working, and for many years it remained an empty tower. I see the clock as an old woman draped in the silks of a complex past that has become a lie and a tall tale. Yet it is also a symbol of colonialism, neocolonialism, and now internal colonialism, with conflicting memories, both public and the personal.  For me, the tower always kindles a time and multiple pasts involving oppression, struggle, and agency that can never be retrieved. My poem asks, “Who unloaded the unutterable darkness / in the market streets /where once a mystic / wandered performing miracles?” In the later part of the 19th century and the early part of the 20th, mystics walked the streets of Jaffna. Did the clock tower absorb lessons of impermanence from those wandering mystics?

I remained quiet for a minute, imagining the time zones he was traveling. A person of colour settled on North American soil, where critical reflection of history is still challenged, after the long silences about the systemic oppression of Indigenous peoples, slavery, and racism, I struggle to engage meaningfully with the various transgressions, memories, and monuments. Ahilan admits, in our times, all local memories are part of global experiences and encounters of bigotry. We end the conversation. The lines from his poem echo in my quiet house and linger on the walls:

where festivals have ceased

time dead in the

amidst the swollen, rising fear

on the face of the sea 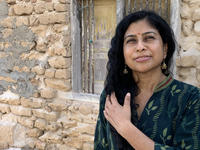 Geetha Sukumaran is a poet and a bilingual translator in English and Tamil. Her first poetry collection Otrai pakadaiyil enchum nampikkai was published in 2014. Her English translation of Ahilan's poetry  Then There Were No Witnesses was published by Mawenzi House, Toronto (2018). Her recent publication Tea: A Concoction of Dissonance published by Dhauli Books (2021) was a collaboration with the poet Ahilan and artist Vaidheki. She is the recipient of the SPARROW R Thyagarajan award for her poetry. She is the founder of Conflict and Food Studies and a doctoral student in the Humanities program at York University, Toronto. 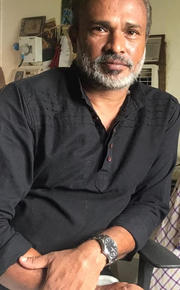 Packiyanathan Ahilan was born in Jaffna, Sri Lanka. He is a senior lecturer in Art History at the University of Jaffna. He has published three poetry collections: ‘Pathunkukuzhi Naatkal’ (Bunker Days -2001), ‘Saramakavigal’ (Elegies - 2011) and ‘Ammai’ (Mother- 2017). An English translation of his poems ‘ Then There Were No Witnesses’ was published by Mawenzi House, Canada in 2018.  He is one of the poets in the collaborative book project of poetry & Art, Tea: A Concoction of Dissonance (with artist Vaidheki and poet Geetha Sukumaran in 2021). He writes critical essays on poetry, heritage, theatre & visual arts. 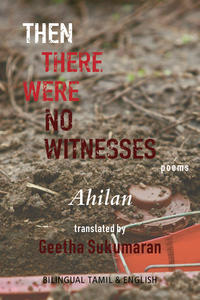 Then There Were No Witnesses

January 17, 2023
Interview with Brad Smith, author of The Goliath Run

February 7, 2020
Where in Canada: The Vancouver of Michael Mirolla’s Torp