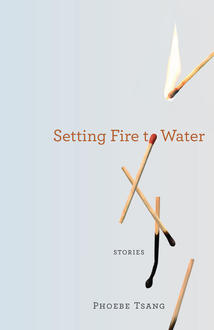 Phoebe Tsang discusses the myriad influences - from Chekov to Sharon Butala - that went into her debut short story collection  Setting Fire to Water (Thistledown Press). We learn how the short story can be like a "perfectly seasoned hors d’oeuvre" and read an excerpt from "Model Shown Is Actual Size."

A (short) interview with Phoebe Tsang, author of Setting Fire to Water

Phoebe Tsang:  Setting Fire to Water is a collection of seventeen stories that (with the exception of two or three) take place in a world that’s identifiably contemporary and Canadian. To my mind, they’re actually set in a multiverse hidden in plain sight, beneath the surface of the everyday. This accounts for the sometimes obscure and eccentric ways in which my characters approach reality and transcendence. The collection is like a gathering of unlikely guests, where unexpected conversations arise about the secret lives of household objects, or the inner dialogue of a wild fox whose natural instincts are overruled by existential doubt.

PT: Its flexibility – a short story contains the same ingredients as an epic novel. Reading a novel is like sitting down to a feast, while a short story can be like one perfectly seasoned hors d’oeuvre. You might not feel full after just one story, but the enjoyment and satisfaction are the same. I think this applies to the experience of both reading and writing: short stories allow the writer to go as big as they want in terms of scope or subject matter. Alternatively, the most seemingly inconsequential event could take centre stage.

PT: Chekhov is a cornerstone of my mental library, but the stories in Setting Fire to Water were influenced by my reading of novels, plays, and poetry, as much as other short stories. A story might be inspired by a particular author, though it’s usually not straightforward. For example, I wrote "Night Watch" after immersing myself in the short stories of Sharon Butala but the influence is probably not apparent – certainly not in the subject matter. At the time, I was focusing on the fluidity and sensuousness of her sentences and paragraphs.

An excerpt from "Model Shown Is Actual Size"

Last September, Imogen began work on a full-scale, three-dimensional replica of her rented bachelor apartment. The apartment was on the second floor of a seventies-style brown brick building north of campus. The replica was made entirely of corrugated cardboard, from boxes Imogen lugged home from the nearby Giant Tiger and liquor store. She cut out and glued on cardboard flaps and bent and stapled cardboard trusses. She painted every surface in painstaking, photographic detail with sable-hair brushes and acrylic paint: the gilded frame on a Cézanne poster, the floral print on wrinkled bedsheets, the warped reflections on the stainless-steel kettle.

Her landlord threatened to evict her if she got paint on any of the actual furnishings, though most of them looked like they had been there since the building was constructed.

Her tutor asked if she was making a postmodern comment on Dadaism.

“Umm,” said Imogen, “I’m not sure if my work is really influenced by anything—at least, not intentionally, anyway.”

Her tutor frowned and replied that that was impossible unless Imogen had been living in a bubble, that art by necessity must speak to the past as much as the future.

Imogen told him she would think about it, and went to weep over a beer in the student bar with her friend Andy.

“Why does there have to be a reason for everything?” Imogen wailed into her pint glass. “Why can’t art just be beautiful?”

“You’re doing your whole apartment?” said Andy. “Even the walls?”

Imogen planned to complete the architectural elements on site, in the student gallery. She painted the cardboard walls and the view through cardboard windows. She decided on a night view with the city’s skyline silhouetted beneath the prairie sky, blue–black and littered with Van Gogh stars—white, orange, and yellow–gold.

She assured her tutors that her apartment in its entirety would still take up only one corner of the gallery. If her landlord did evict her, she decided, she would take refuge in her cardboard kingdom.

Imogen held near and dear an image of her six-year-old self gleefully clutching fistfuls of coloured crayons, coaxed and nagged into literacy when she would much rather draw. Her parents imposed educational spelling bees that culminated in the challenge of her own name—she always got as far as the g and stopped. What was that many-lettered caterpillar crawling across the page? I-m-o-g—I, mog. She still signed her paintings “mog,” as if those three letters could whisk back purple mountains, blue sunsets, and pink ponies long gone. Now, even the known world was disappearing. Her apartment, filled with cardboard reproductions of seventies furniture, was shrinking by the day. If she didn’t stop soon, there’d be no room left to breathe.

The day Imogen absentmindedly set her cardboard kettle alight when she put it on her electric stove, turned on the element and left the kitchen, was the day she realized she had gone too far. She was on the other side of the apartment, plumping cardboard cushions to make them look more inviting, when she smelled the smoke. She would have raced over were it not for the fact that her cardboard ceiling chose that moment to collapse. Imogen army-crawled her way through, and quelled the flames with an aluminum saucepan.

Afterwards, she searched through the debris for her sketchbook. She ripped out a fresh page and penned a letter in her best (though still wayward) cursive, informing Whom It May Concern that Imogen Sparks was ignoring her tutors’ warnings and fulfilling her mid-term jury’s predictions by dropping out of the undergraduate program in fine arts, just three weeks before fourth year finals.

Imogen slipped the folded letter into an envelope the hydro company had kindly provided along with her overdue bill, pulled on her windbreaker, and cycled to the dean’s office. She handed the envelope to the dean’s secretary, fled down Portage Avenue, and turned down Osborne Street, not stopping until she reached Roxxy’s Nails and Spa.

Roxxy was on the phone behind the reception desk and glared at Imogen as if she might be a door-to-door salesperson.

“You want the mani–pedi?” snapped Roxxy. Her lips were syrup-coated cherries beneath a peroxide moustache.

“Actually,” said Imogen, “I was wondering if I could just have my toenails done.”

“Cheaper to do both,” scowled Roxxy. “It’s fifteen for the pedi.”

Imogen had biked past Roxxy's many times before. The sign in the window said “Mani-Pedi $25 Special” but Imogen never had a spare twenty-five dollars. Besides, she had a good eye and steady hand and was perfectly capable of painting her own nails. She thought of the twenty-dollar bill she had withdrawn from the ATM that morning. Her balance was now minus $283.79 and her credit card bill was even worse.

“No, really. I’m an artist and I work with my hands,” lied Imogen. She held up her short, bitten fingernails. Her fingers were peeling with dried Krazy Glue and scabbed from minor X-Acto knife accidents. “Anyway, I just want a splash of colour—a token symbol for the end of an era.”

“Uhh, kind of,” said Imogen. “We’re just taking a break till I figure a few things out.” 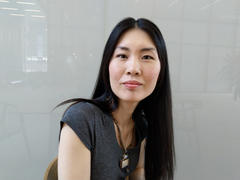 Phoebe Tsang is a Hong Kong-born Chinese, British, and Canadian poet, author, librettist, and playwright who makes her home in Toronto. She has published a poetry collection, Contents of a Mermaid’s Purse (Tightrope Books, 2009), and her short stories have appeared in Geist, Broken Pencil Magazine, Litro Magazine, Rivet Journal, Asia Literary Review, The Bombay Review, and other places. Her writing is informed by lyricism and rhythmic sense, inherited from her background as a professional classical violinist. Setting Fire to Water is her debut collection of stories.

More short sweetness is in reach! You can  catch up on our Short Story Month series here. And follow along on social with #ALUShortandSweet. 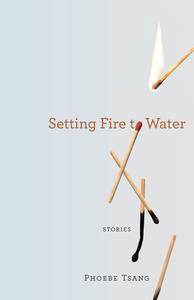 May 3, 2022
Liner Notes with Tracey Waddleton