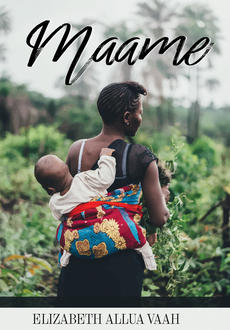 A celebration of womanhood and inside look at Nzema culture, Elizabeth Allua Vaah's collection  Maame (Mawenzi House) follows three generations of Ghanian women in linked stories. In our interview, Elizabeth shares her appreciation for the form as well as an excerpt from "Aso: Mother of Angels."

A (short) interview with Elizabeth Allua Vaah, author of Maame

EAV: The short story form enables one to savour one story at a time. In an era where people hardly have time, being able to start and complete one story at a time gives one a sense of accomplishment. I love that I can fit different stories in the same book without the need to drag it out unnecessarily.

An excerpt from "Aso: Mother of Angels"

The story of Aso, Egya Amakyi’s first wife, is difficult to recount. For anyone to be faced with such misfortune in the midst of plenty is something that beats the mind. She married Amakyi when he was a young man and stood by his side as his wealth increased. A hard-working woman, she tilled the land he inherited from his father. It was said that the coconuts she planted on that farm were what brought the money that Amakyi used to buy his first fishing net. As his wealth increased, Aso’s fortunes dwindled. Her first son, a handsome baby boy, died within two weeks following his birth. She had been healthy throughout the pregnancy—it is rumoured that the day she went into labour, she had carried a basinful of fresh fish to Kamunu to sell.

While the men fished, it was the job of the women to sell the fish. Every day after the men brought in the catch, they would sort out the bigger ones from the small ones. The women were then invited to come and negotiate their prices. There was no weighing scale; instead, a bowl with the capacity to hold about two and a half pounds of fish was used. The smaller fish were priced by the bowl. Some thirty minutes were spent negotiating the price of a bowlful. The agreed price depended on the quantity of supply, the season, and the time of day. The catch that came in early morning to mid-afternoon commanded a higher price because there were more customers then.

The bigger fish were sold individually by their type and size. The buyers’ representative normally just took a look at a fish, sometimes picked it up to gauge its weight, and then quoted her price. Then bargaining began.

Some women preferred to smoke the fish in a clay oven until they were well dried, before taking them to Ayinam, NewTown, and other bigger towns nearby to sell on market days. Others ran with their fresh fish straight to Kamunu and Bokabo, which were five and ten kilometres away respectively. These inland communities relied on sellers like Aso from Aakonu and other coastal villages for their fish.

Aso was a regular at the seashore and was known by the other women as a top negotiator and a very good saleswoman. So while the role of negotiator was not assigned to any specific person, when Aso was around she usually ended up negotiating.

This particular day started just like any other. Although heavily pregnant, she went to the shore with her big basin and tray as usual. She led the price negotiations, which resulted in what they all considered a great deal. She purchased sixty pounds of the small fish and forty of the larger ones, for a total cost of two hundred shillings. She carried her load straight to the dock to catch the canoe to take her to the other side, where she continued her journey to Kamunu on foot. She had been feeling lower abdominal pains since morning but didn’t think much of it. Fortunately, the canoe was on her side of the river when she arrived. She put her load into it, rowed to the other end, carried her load and walked briskly along the five-kilometre footpath to Kamunu. She felt a wetness as soon as she arrived and started to put down her load. With this first pregnancy, she didn’t know what to expect when she went into labour. She naively thought that she had soiled herself.

Aso left her fish in the care of a friendly customer and asked to excuse herself. She went behind the kitchen of one of the compounds close to the market to check herself. That was when she saw what she was later told was the “show,” a thick mucus covering the cervix that comes out at the onset of labour. Within minutes, her waters broke and she could hardly walk. She gave out a loud cry, drawing the attention of the women in the compound. Knowing that she was heavily pregnant, they rushed to her help. They took her to a makeshift bathroom in the compound, and soon realized that the baby was already on the way. One of them put her cover cloth on the clay floor and helped Aso onto it. Word spread around that Aso was in labour.

Aso was in unbearable pain. Her screams could be heard into the distance, calling out Amakyi’s name and vowing never to go through this again.

“Noo, this is too painful. Amakyi, why would you do this to me? I do not want to see your face ever again.”

That, to many people, is the irony of childbirth. At the height of the pain most women swear never to go through it again. Delivery room nurses know all about this. They hear women say all sorts of things against their husbands. Once the baby is born, however, most women forget they ever said any such thing. Most take one look at their babies and fall in love forever. They would never change a thing. Others do struggle with postpartum depression. But what the mothers need is support that is nonjudgemental. 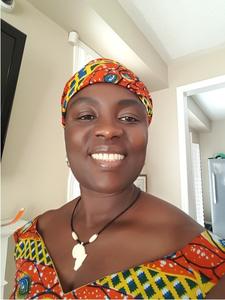 Elizabeth Allua Vaah hails from Bakanta, a village on the western coast of Ghana. She was the first in her family to attend high school, and one of the first few girls in her village to go to university. Maame is her first work of fiction. Allua is an advocate for better maternal health through her foundation, the Vaah Junior Foundation, and a strong advocate for girl's education, always using her own life story as an example. She works as a risk manager in a major bank and lives in Greater Toronto.

More short sweetness is in reach! You can  catch up on our Short Story Month series here. And follow along on social with #ALUShortandSweet. 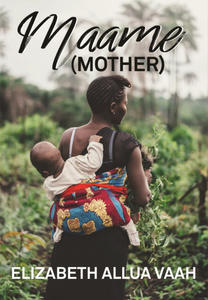