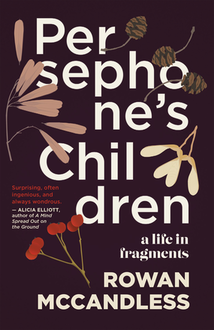 Author of Persephone’s Children: A Life in Fragments (Dundurn Press) Rowan McCandless, joins us today to share about reclaiming one's voice and identity through experimental creative nonfiction writing that includes multiple mythologies. In her essay, learn more about McCandless’s odyssey as a Black, biracial woman who escaped a long-term abusive relationship.

While in the grip of a long-term abusive relationship, I lost my voice and identity. One of my ex-partner’s rules, and there were so many of them, was that I was not supposed to tell. Over the years I was with this man, my voice became caught in my throat and barely rose above a whisper while the craft and pleasure of writing were lost to me.

When I left the situation in 2017, the aftermath came with me. I was diagnosed with PTSD. Trauma wrought havoc, and I had to work hard to begin the reclamation of my voice and identity. Now that I was on my own, I could return to my writing without fear of abusive repercussions or censorship. When I found several ancient nonfiction drafts lingering in a drawer, I discovered that I couldn’t write about my life employing a euro-centric, linear narrative arch, which made me feel additionally silenced.

Due to the trauma, my memories were stored like partial and ephemeral snapshots. An emotional, mosaic narrative versus a linear, chronological retelling came into being as I wrote the essays for Persephone’s Children: A Life in Fragments. Writing while accepting fragmentation, juxtaposition, and segmentation made sense to me. They gave me a way to write about my personal history and what it meant to lose and reclaim who I was, separate from my abuser. Experimenting with creative nonfiction gave me a tangential entrance into writing about challenging subject matter, especially important as I wrote about my experience of leaving and its aftermath while still in the thick of it.

A quote by Toni Morrison guided my path. “If there’s a book you want to read, but it hasn’t been written yet, then you must write it.” I embraced being an outlier. I embraced outlier forms.

Experimenting with creative nonfiction gave me entry into penning my past onto the page. These forms provided a way to rediscover my voice and aspects of self by creating a mosaic memoir of stained-glass pieces versus useless shards of broken glass. I made use of the lyric essay, which relies on the autobiographical information of a personal essay alongside the poetics of language and form. In “Blood Tithes: A Primer,” intergenerational binds, bloodlines, racism, and resiliency were highlighted as a lyrical essay.

The flash nonfiction essay is a form of creative nonfiction in which compression and the constraint of word count provided the essay’s parameters. Flash nonfiction pieces are generally 1,000 words or less. An example of this form could be found in my composition entitled “Therapist,” which consisted of a singular word repetition to decipher the text. It spoke to what I couldn’t say out loud.

The hermit crab essay provided structure. The containers used functioned as a shell to hold harrowing stories. Hermit crab essays took on many forms; the possibilities were endless. They allowed me to write about my life in a way that provided distance and safety. For example, in wanting to explore the beginnings of my relationship with my ex, I made use of a hermit crab essay in the form of a legal contract and diptych entitled “Binding Resolutions.”

The decentered hermit crab essay upended the way an essay could be told. Decentered, non-linear, and fragmented, this structure borrowed a visual rather than a textural form. In “Practical Magic: A Beginner’s Grimoire,” I explored the themes of magick, spirituality, trauma and safety through both text and imagery.

I wrote a prose poem piece entitled “Today,” which relied on prose and elements found in poetry like rhythm, rhyme, and imagery to explore depression and was rendered as a meditative, stream-of-consciousness essay. The estrangement with my Polish maternal grandmother would only allow us to visit her home in California if my brothers and I pretended we were Spanish instead of being Black and bi-racial, aspects of gambling, and the black-lipped pearl oyster, Pinctada margaritifera were woven as a three-strand braided essay. Collage essays which generally forgo conventional transitions, left it to the reader to locate and interpret connections between written fragments.

Once I was introduced to creative nonfiction and the myriad of ways a story could be told, I finally found my way into crafting essays about my past. I surrendered to my voice and my story and kept writing.

Writing about multiple mythologies garnered further understanding. I wrote about Persephone, a Greek Goddess who lived between the underworld and the bounties of the earth and harvest. As a black, biracial woman, as a child, I felt an affinity to the story of Persephone and how we both dwelled in liminal spaces. I wrote about Parthenope, a Greek siren whose name means “maiden-voiced.” I wrote about La Madama, traditionally an African American spirit guide, who aids and offers advice in times of need and with daily affairs. La Madama provided solace and led to spiritual growth. These mythologies emerged to bind themes of home and belonging, of being an outsider, legacy and loss, motherhood and daughterhood, racism and intergenerational trauma, mental illness, and resiliency.

Cultural mythologies such as the artificial construct called race were scrutinized. My family’s myths such as the importance of appearance versus substance, of how we do not share our “dirty laundry” in public, and the demand for perfection could be critically examined. As well, my abuser’s rule of “you’re not supposed to tell” was studied and finally challenged through writing.

My past no longer defines but informs me. Creative nonfiction and the use of multiple mythologies guided my journey in writing Persephone’s Children: A Life in Fragments. I reclaimed that which had been supplanted during years of abuse. For memoir writers, experimenting with creative nonfiction offers many ways into a story, especially if they are trauma-informed and the multiple mythologies that reside there. 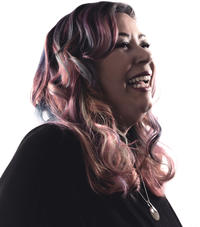 Rowan McCandless is an award-winning author of fiction and creative non-fiction, and serves as the creative non-fiction editor for The Fiddlehead. She has been longlisted for the Journey Prize, won the Constance Rooke Creative Non-fiction Prize, and received gold for One of a Kind Storytelling at the National Magazine Awards. Persephone's Children is Rowan's debut memoir and she lives in Winnipeg. 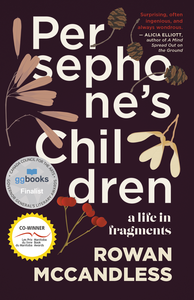 Under the Cover: The Lost Expert

April 28, 2015
Under the Cover: Janet Merlo Shares Her Motivations for Writing 'No One To Tell'