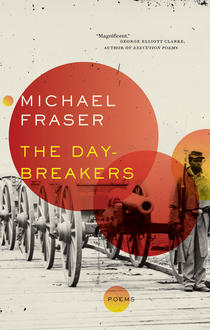 Ha! Normally, the muse is whichever beautiful woman I’m helplessly and amorously enchanted by at a particular moment in time. The typical muses who normally adorn my poetic thoughts are not relevant in this particular situation since The Day-Breakers is an homage to African-Canadians who fought in the American Civil War. This collection presented multiple muses in terms of the lexicon, the stories of the particular lives I highlighted, and my desire to provide a poetic voice to showcase their experiences. Funny enough, at times I felt I was channeling voices to the page. This experience was most pronounced when I penned “African Canadian in Union Blue”, the poem that won the 2016 CBC Poetry Prize. I completed the poem roughly 15 minutes before the deadline! There was no time to contemplate or ponder line breaks, word choice, etc. In fact, the bulk of the poem was written in three hours. I had composed the first five lines two weeks earlier. Hemingway claims one’s subconscious will work on your writing when one is not writing, and I believe this is what happened in this particular instance. The bulk of the poem was written in a stream of consciousness fashion.

Inspiration arose from many places and was certainly multifaceted. I believe I alluded to these inspirations when addressing the muse topic. I don’t have any specific poetic rituals or writing locations. However, I will write everywhere and anywhere I can once the opportunity presents itself. I write in meetings, on subways/buses, in waiting rooms, at bars/restaurants if I’m the first to arrive. The most fruitful time seems to be after my kids have gone to sleep. I’m a natural night owl who has taught himself to become a morning person, however, if I’ve latched onto a poem and my creative juices are in full torrent, I’ll stay up and sacrifice adequate sleep to complete a poem. I tend to handwrite first drafts on paper, and generally in a notebook. I don’t think I’ve ever written a poem directly into a computer or laptop. It almost seems unnatural to me. I need that tactile connection with hardcopy before I type it into my laptop.

My first poems were cheesy love poems written when I was 15. They were horrid! However, I did show an interest in poetry and a few years later, my high school English teacher, Ms. Elliott, suggested I join a poetry workshop held at the City of York Public Library. Poet James Deahl lead the workshop. I remember showing up with photocopies of my poems which were summarily ripped to shreds during the workshopping process. It took every ounce of courage and fortitude to return the following week, but I did, and that’s when I truly commenced my poetic journey. Poets Judith Stuart and Jennifer Footman were also workshop members so there was a steep learning curve. James Deahl was my first mentor and he literally introduced me to the contemporary poetry world. I learned about literary journals, quarterlies, contests, and how to submit to journals. I attended my first poetry readings and was introduced to the likes of: Allan Briesmaster, Heather Cadsby, Maria Jacobs, Beverley Daurio, Donna Langevin, Pam Oxendine, Roo Borson, Kim Maltman, Libby Scheier, and so many others. In retrospect, I was ridiculously lucky to have James Deahl as my guide and sagacious poetic guru. He had lived with Milton Acorn and Gwendolyn Macewen when he was younger. Talk about being surrounded by genius! I must confess it took me a few months before I attended Deahl’s library workshop. I was 17 and foolish. I arrived just prior to the last few sessions. My poetic journey would have been drastically different or nonexistent without Deahl’s library workshop!

I took an intro creative writing course with Libby Scheier my first year at York University. Libby indicated I was a much better fiction writer than poet. Unfortunately, I’ve only published one short story which was achieved through Diaspora Dialogues’ mentorship program. I worked with Shyam Selvadurai. I’ve commenced ten short stories. I obviously need to revisit them. I find poetry far easier to write than fiction.

The Day-Breakers is a poetic homage to African-Canadians who fought for The Union during the American Civil War.

I think Luke Hathaway’s blurb nails it. “In The Day-Breakers, poet Michael Fraser imagines the selflessness of Black soldiers who fought for the Union during the American Civil War, of whom hundreds were African-Canadian, fighting for the freedom of their brethren and the dawning of a new day. Brilliantly capturing the rhythms of their voices and the era in which they lived and fought, Fraser’s The Day-Breakers is an homage to their sacrifice and an unforgettable act of reclamation: the restoration of a language and a lived experience, and a powerful new perspective on Black history and experience.”

I feel it’s a very unique collection due to the subject matter, but most importantly, the lexicon. I employ multiple examples of Civil War era slang and terminology. The lexicon immediately immerses the reader in this Civil War era world. The terms themselves are exquisitely poetic. I still remember when I discovered the word “bumbershoot” for umbrella. I was waylaid. Here are a few other gems: “boneyard” for cemetery, “coffin nail” for cigarettes, “play-pretty” for toy, “clackers” for teeth, “idea-pot” for head, “seed-folk” for ancestors, “tumbleset” for somersault, etc. There were hundreds of them! It was interesting to learn many terms are present-day regionalisms throughout the United States but especially in The South, Appalachia, and the mid-Atlantic states. I took this treasure trove of fascinating vocabulary and created my own dictionary. This process was ridiculously time-consuming, however, I enjoyed immersing myself in these regional terms. Creating the dictionary greatly facilitated and expedited the writing process.

a. Read! Listen! Observe! Devour as many poems and exceptional poets as you possibly can. Listen to poets reading/reciting their work. Listen to how others interpret their work. YouTube is excellent for this. The Griffin Poetry Prize page has excellent content filled with ace poets.

b. Experiment with form and style. This is especially useful when experiencing writer’s block. There’s something inexplicably freeing when tackling more structured forms such as tankas, ghazals, haikus, sonnets, pantoums, etc.

c. Focus on excising the beginnings and endings of  poems. I’ve noticed what I think is the beginning is often a preamble into the poem. The poem often truly begins a line or two further down. The great Yusef Komunyakaa said we often write past the poem’s true essence in our zeal to provide the reader with everything.

d. Consistently submit poems for publication. We never know what editors will fancy. There have been numerous times where I’ve submitted my three best poems and threw a mediocre poem in the bunch. The polished poems are declined and the editor fancies the mediocre poem. This has happened a few times.

e. Use more words with Germanic roots. English is obviously a Germanic language, however, over 50% of the vocabulary is derived from Latin. The Germanic words tend to be more concrete.

g. At day’s end, poetry is a way of seeing, experiencing, and hearing the world. Maintain your inner childish wonder of the world.

Wow! I could literally name 70 to 80 and that’s not hyperbole. My all-time favourite poet is Brazilian Adelia Prado. Carlos Drummond de Andrade discovered Prado and announced “St. Francis was dictating verses to a housewife in Minas Gerais, declaring that ‘Adelia is lyrical, biblical, existential; she makes poetry as naturally as nature makes weather.” This is the best description of her talent. Read any of her translated collections by Ellen Dore Watson. The Mystical Rose: Selected Poems is my favourite Adelia Prado volume.

I’ll only mention my favourite Canadian poets to reduce what would be a ridiculously long list. I apologize in advance if I forget anyone. I admire: Gwendolyn Macewen, Patrick Lane, Leonard Cohen, James Deahl, Roo Borson, George Eliott Clarke, Al Moritz, Chimwemwe Undi, Michael Prior, Alessandra Naccarato, Hoa Nguyen, Phoebe Wang, Shaun Robinson, Adebe DeRango-Adem, Evie Christie, Dani Couture, Jean-Marc Desgent, Jenny Boychuck, Sarah Yi-Mei Tsiang, Lisa Richter, and Selina Boan. I’ve recently discovered Basma Kavanagh’s work and Grant Wilkins. Looking forward to exploring more of their poems. I’ve constantly meandered through various intense poetic crushes with specific collections and the latest Canadian one is Re-Origin of Species by Alessandra Naccarato. It’s been my favourite collection the past three years. I visit those poems monthly if not more frequently. These poetic obsessions also apply to individual poems. I’ve been enamored with Robert Lowell’s “Epilogue” for the past ten years. My favourite individual Canadian poems include: Susan Elmslie’s poem “Box”, Patrick Lane’s “The Ecstasy of No”, Michelle Barker’s “The Night of My Conception”, and “Who Can Look at the Light When It’s So Unflinching” by Alessandra Naccarato. I’m completely awed and mesmerized whenever I read these poems. My poetic life goal is to create poems half as polished and accomplished as these poems! Each of these poems is a tremendous muse.

Does music inspire you when you start writing poetry?

I card raw wool and think I see

him abeam through the window.

He walks the path upholding a

black bumbershoot in this

and only see the sky’s draggy

and stump fence from sight.

My mind’s at the end of its row.

The mooing swoo lean one way

against the free stall. I ribble off

provide larder to fill the root

house. I told my oldest he must

The glim brightens this room,

let’s the day light down and furnish

these brush arbor walls. I need to

get the rovings and batts ready for

the coop. I know he’ll be delivered.

Michael Fraser is published in various national and international journals and anthologies. He is published in Best Canadian Poetry in English 2013 and 2018. He has won numerous awards, including Freefall Magazine’s 2014 and 2015 poetry contests, the 2016 CBC Poetry Prize, and the 2018 Gwendolyn Macewen Poetry Competition. The Day-Breakers is his third poetry collection.

During the month of April, you can buy The Day Breakers and any one of our other featured Poetry Express books for 15% off + free shipping in Canada with promo code ALUPOETRYMUSE. Or find them at your local independent bookstore!