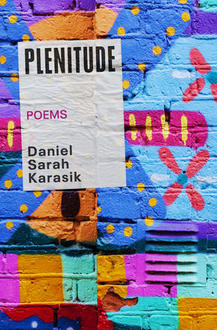 This week on Poetry Muse, we are joined by Daniel Sarah Karasik, whose new poetry collection —   Plenitude (Book*hug Press) – released today. Shaped by their experience of grassroots social and political advocacy, these poems are an offering to those engaged in struggles for a better world—and an acknowledgement of the sometimes contradictory meanings of those struggles. Plenitude cartwheels towards a world that might be: a world without cops or bosses, without prisons, without oppressive regulation of gender and desire. It is a song for the excluded and forgotten and those who struggle alongside them.

In today's Q&A, Daniel shares how they started writing poetry, and how when they were active in social movements like the Fight For $15 and Fairness labour justice campaign, was around the time they began to write their poetry collection.

I don’t think I have any one muse tbh! But I’m inspired by people who self-organize collectively to transform their circumstances for the better, who have a vision of a different world and seek effective collective ways to fight for it. A lot of Plenitude is about those kinds of struggles, directly or obliquely.

I was active in social movements like the Fight For $15 and Fairness labour justice campaign when I was working on Plenitude most intensively, and I guess I was preoccupied with the question of what kinds of aesthetics could support or run alongside that kind of political work. Like…how to create art that might be usefully in dialogue with social movements, though not (or not only) straightforward propaganda. I think I was inspired to write many of the poems in Plenitude by the difficulty of resolving certain political questions in a straightforward or practical or argumentative way; poetry seemed to offer a different, more oblique approach to those questions.

The process of writing the poems in the book had very little consistency. Some of them I wrote at my desk at home, with a conscious intention to write to a particular theme, while others I wrote hastily on my phone while I was on the move. Pretty much all of them I revised intensively over several years.

I’ve been writing poetry consistently, or in extended episodes that have consistently recurred, since I was a teenager. I’ve never fully chosen it over other forms—I still write prose non-fiction, fiction, and occasionally drama as well—but I do like how free it can be from some of the structural or narrative expectations that often attach to other forms. I like that it can be just voice and music, thought and feeling, in whatever proportion. I like how, compared to some other forms, a poem’s parametres are less defined in advance by convention (while the form also has a rich trove of conventions to be mobilized, subverted, repurposed).

Hm, idk…I guess I feel like poetry is always rooted in a specific politics, even if that politics is so naturalized or normalized that it appears neutral, and I find it can be cool and good to try to identify those tacit political-aesthetic connections and engage critically with them, play with them. But a lot of poets are already doing that, so I don’t know if this is “advice.” Just, like… yeah, more of that pls :)

I really love Jody Chan’s work; their most recent book is the collection Sick. John Elizabeth Stintzi’s Junebat (they have a new novel out, too, called My Volcano). Anne Boyer’s writing made me excited about poetry again after a long period when I wasn’t writing many poems; all of her work is amazing, but I’d especially recommend A Handbook of Disappointed Fate.

A poem from Plenitude

I have an (actually) autistic relationship to metaphor, which is to say

I have trouble with the slippages involved in claiming two things

are the same when clearly they’re not, and you might ask

(I wouldn’t, but you might) what kind of poetry can do without

metaphor, can resist saying a rent strike is a rising tide

or a riot is a harvest moon, is this not an impoverishment etc.,

aspires? maybe, but my brain never tires of going like:

suffering isn’t bravery those are different things let someone say it.

don’t let them say that. a habit isn’t a need unless

it is. a friend isn’t a comrade unless they are.

a comrade isn’t salvation, but enough of us

struggling together may be. this scream 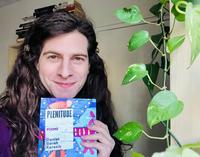 Daniel Sarah Karasik (they/them) is the author of five previous books, including the poetry collection Hungry and the short story collection Faithful and Other Stories. Their work has been recognized with the Toronto Arts Foundation’s Emerging Artist Award, the CBC Short Story Prize, and the Canadian Jewish Playwriting Award. They organize with the network Artists for Climate & Migrant Justice and Indigenous Sovereignty (ACMJIS), among other groups, and are the founding managing editor of Midnight Sun, a magazine of socialist strategy, analysis, and culture. They live in Toronto.

During the month of April, you can buy  Plenitude and any one of our other featured Poetry Muse books for 15% off + free shipping in Canada with promo code ALUPOETRYMUSE. Or find them at your local independent bookstore! 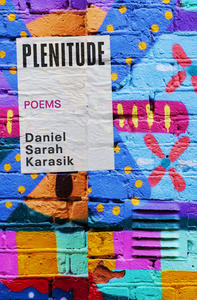