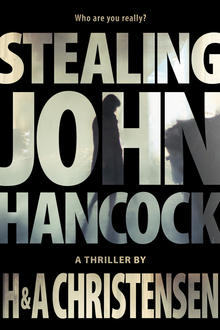 Meet the Christensens - the Mother-Daughter Duo Behind Stealing John Hancock

Alie and Hejsa Christensen are a mother-daughter writing team that have taken their screenwriting chops to the printed page with this Fall's blockbuster thriller novel  Stealing John Hancock (Turnstone Press). We talk to H&A (their combined nom de plume) about their collaborative process, how writing about real estate fraud is different than other crimes, and how their main character grows throughout the novel.

All Lit Up: As seasoned screenwriters, how does writing for the screen and the printed page differ? How were you able to give Stealing John Hancock a highly cinematic quality, nonetheless?

Alie and Hejsa: Screen and novel writing have their own strengths in allowing you to tell a story that has inspired you. When we first started Stealing John Hancock, we envisioned it as a screenplay, the medium in which we had been working, and knew the plot had strong visual potential—film’s most glaring asset. Early in the writing process, we switched to writing it as a novel because we were drawn to exploring theme and character nuances in the greater depth that we knew could be achieved in that format. It was quite liberating to work in that realm and have more freedom with exposition and internal monologue to transport readers into a character’s world. It’s good to hear that the novel has a highly cinematic quality because we strove to create captivating images in our writing to achieve some of what we first envisioned, even though we didn’t have the unique visual dimension of film. We wanted a novel’s depth and breadth, but not at the expense of tension and pacing. We wanted to take what we had learned from the film world about conveying a compelling story and give it new, hopefully greater, life with the arsenal in a novelist’s armory.

ALU: You’re a very collaborative writing pair – we saw on your website that when you have the opportunity, you write literally next to one another in Hejsa’s loft. Talk about that collaborative process a little bit. Are you always working in tandem, or do you take things away and regroup?

H&A: One thing we have found essential for working together is making sure we have a shared vision recorded in a solid outline so we’re heading in the same direction. We always discuss and plan first. This is a long process because we lay out every scene and write notes about each. Of course, they get changed and switched around quite a lot as we progress. After that we each take a bit—sometimes paragraphs, sometimes sentences, sometimes full scenes. We can be working on the same bit or different bits, whatever inspires. We can be in the same space, or in separate locations connecting with screen-sharing technology, it doesn’t really matter (although it is nice to see each other). Wherever we are, connected by phone, screen or in person, there are stretches of quiet except for the tandem clacking of computer keys. We each retreat to our own head space and have no idea what the other is writing. After we have both had a chance to express our ideas on the page, or if one of us totally stalls and needs some infusion from the other, we will regroup and present what we have. We discuss, combine, and rewrite, discuss, combine, and rewrite. We write over top of one another, until something emerges that we are both happy with. This process of writing in layers ensures that our stories have one cohesive voice. There aren’t sections that are “Alie’s” or “Hejsa’s.” All of it is “ours.” We creatively feed off each other, find synergy in our process, and have fun!

ALU: The book concerns itself with financial crime, identity theft, and fraud. When you set out to write a book, was this the type of crime you were going to write about at the outset? What drew you to it? What unique issues does it pose the writer – in your case, the writers – as opposed to writing about a murder, say, or a theft of an item?

H&A: Can your house be stolen? If you’re lucky enough to own one, it’s probably your biggest investment, not to mention a giant, immovable object. Of course that’s secure! Or so we thought until we saw the newspaper article that ignited the spark to write this novel. It recounted the story of a homeowner who discovered that the deed to his house had been fraudulently transferred and a huge mortgage taken out against it. We researched and discovered countless variations of the same scam—houses sold, mortgaged, or transferred without the owners’ knowledge. “House stealing” was too bizarre and too calamitous for us to ignore. We knew we wanted to write about this type of crime.

From a story perspective, one benefit of focusing on financial crime and identity fraud, compared to something like a murder, is that the impact is surprising. There is a sense of being blindsided by the devastation. Also, unlike a murder, which hopefully never enters our personal spheres, identity fraud is something we can all relate to. Even if it is just the occasional fraudulent charge on our credit card or dodging phone calls from bogus tax agencies, this sort of crime has invaded modern society to the extent that it is everywhere. Any one of us could be the next victim. For us, that relatability makes these types of crimes all the more haunting.

ALU: When the reader first meets JP Hancock, he really does seem like a perfect rube. What do you like about having a hapless main character? What does it lend to the narrative?

H&A: When we meet JP, he is a bit of a wreck—dissatisfied, directionless, always unsuccessfully striving for something better. There are two things that appeal to us about where JP begins. One is that, on some level, we can all relate to him. Everyone has times when they feel they are underachieving and just don’t have life figured out yet. JP’s panic attacks are windows into his deepest fears and where we start to understand him. We find that his inability to settle on a direction is really a grasping for a meaning that constantly eludes him. There is something universal about that struggle. The other nice thing about where JP begins is that it leaves a lot of room for character growth. We like to see our protagonists changed by the experiences of their journey. And JP’s transformation is a big one. His mundane, ordinary life is turned upside down when he finds himself unwittingly entwined in a felony. It takes losing everything for him to realize that what he had in the first place might not have been that bad. His experiences change not just his life situation, but his way of looking at the world.

H&A: There are many writers whose work inspires us. We’ve had countless discussions about who mastered dialogue in their latest work (think Tana French), or who got the pacing just right (like Marissa Stapley), or who made a setting come alive (as did Delia Owens). But we didn’t look to other works for inspiration specific to Stealing John Hancock. When it comes time to write our own work, we’re not thinking about someone else’s. This story was inspired by real life crimes we researched. We pushed the scenario to the extreme and that makes the story somewhat larger-than-life, but the idea is rooted in actual frauds and the devastation they can cause. 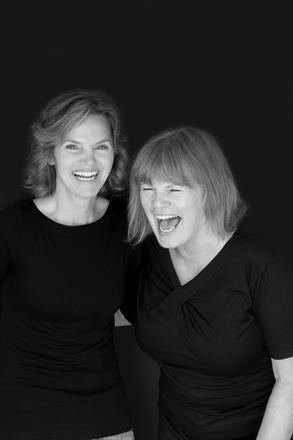 Alie and Hejsa Christensen are a mother-daughter writing duo based in Ontario, Canada. They discovered their affinity for working together when they were in-house writers for a film production company. They have now made the leap from silver screen to printed page. Stealing John Hancock is their first novel.

Photo of the authors by Asia Butterfly Photography.

Many thanks to Alie and Hejsa Christensen for answering our burning questions about their novel  Stealing John Hancock (available now!). 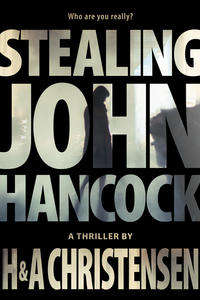 By H & A Christensen