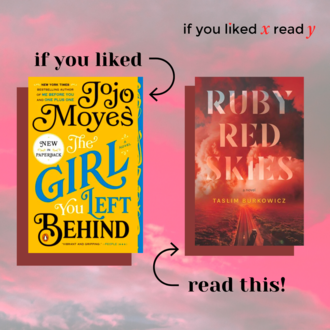 If you were charmed how two plotlines come together in Jojo Moyes’ The Girl You Left Behind, you won’t want to miss Taslim Burkowicz’s Ruby Red Skies (Fernwood Publishing), where the rich history of the Mughal Empire converges with modern day life for an Indo-Canadian woman from the Vancouver suburbs.

Much like recently widowed Liv Halston in The Girl You Left Behind, protagonist of Ruby Red Skies Ruby Andrews is a musical aficionado who has lost her spark in both her marriage and her life. Likewise, both books feature two timelines – a modern plot line and one set in the past – which eventually connect.

Instead of a seemingly stolen painting from 1916 that ends up hanging on Liv Halston’s wall in The Girl You Left Behind, in Ruby Red Skies, the past comes to Ruby, in the form of stories about the Mughal Empire that her mother imparted to her. As Ruby struggles in her mixed-race marriage and explores her Indo-Canadian identity, she takes a trip into the devastating wildfires happening in BC to find closure to a secret she has kept buried for years. But addressing her past comes with reckoning with her Mughal ancestry, and thus the story of Rubina, a dancer living in a brothel in India in 1610, enters the novel. As Ruby continues her adventure meeting whimsical characters, so does Rubina, separated by four centuries, living in medieval India. While Ruby meets an existential motorcyclist and swing dancers, Rubina mingles with mischievous twin eunuchs and an opium addict.

The Girl You Left Behind tackles the occupation of France during World War I through the eyes of Sophie, the unwilling subject of one Kommandant’s obsession, while Ruby Red Skies' historical fiction component focuses on Rubina, and her ability to survive captivity at the Red Fort where she is forced to perform for the royals. Both heroines, tragic pawns in times of political upheaval, fight for what they believe in. Likewise, their modern-day counterparts, Liv and Ruby, try to claim their own space in today’s world. But can The Girl You Left Behind’s Liv find freedom in a world where her love for one painting depends only on a monetary value instilled in it by others? Can Ruby in Ruby Red Skies ever really be free when the world is quite literally burning down around her?

Moyes is able to transport us seamlessly between the world of war-ravaged Paris, where Sophie is left scrambling for bones to feed her family, to modern day Britain, where Liv, though alienated, lives in house that opens its ceiling to the stars. Burkowicz takes us straight from the battle ground of Agra where an Empress battles enemies on an elephant, to a Vancouver house with a glass solarium with an insolent teenage girl and a cheating husband as its occupants. If you want to spend your time jumping between centuries, Ruby Red Skies is the book to read.

Many thanks to Sanna at Fernwood for sharing the similarities between these two plotline(s)-driven novels. Learn more about Ruby Red Skies on All Lit Up.

November 28, 2022
Goose Lane Puts Us Under Their Spell