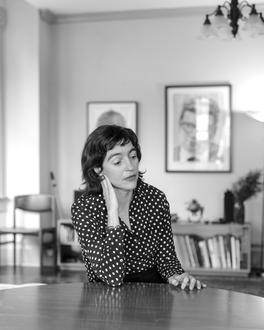 I often run across memes about obscure women who once made big contributions to important fields without anyone knowing so. An overlooked WWII pilot. An actor who was also secretly a mathematician. These women are marvellous. But the posts about them reek of desperation. As if women’s history were so thin, so puny, it needed propping up. Those women count, the memes imply, because they joined “serious” fields of men’s achievement.

But if women want to feel the richness of their own history, they only have to run their fingertips over whatever they’re wearing. Silk dress or belted coat. Sock or tank top. Where the sweater sleeve meets the torso, where the hem of pants draws a near-invisible line, the skirt pleats and the blouse darts—at those junctures is the living history of women.

While researching my new book of poetry, The Endless Garment (Wolsak & Wynn), which treats fashion and dress, I had a transcendent moment when I let this fact sink in: for millennia, nearly all clothing and textiles, everything you could wear or touch or keep close to the body, was women’s work—an unbroken line of artistic expression, social contribution and achievement disappearing into history’s mists.

Clothes and textiles were elegant displays of women’s power. Dress was the site of thrilling play, spiritual meaning and just plain beauty. A finely cut Gwich’in men’s summer outfit, an embroidered Norwegian bunad, a silk Thai sabai wrap. Women put endless time and effort into such clothes. Garments far exceeded utility, even back when each step in fabric making was slow and painstaking.

In her book, Women’s Work: The First 20,000 Years, Elizabeth Wayland Barber argues that, from the stone age, modesty was the least of clothing’s functions. Garments could signal fertility, mark status, confirm family membership and even be traded as currency. Since women were always primary caregivers for children, they stayed close together for help. This gave women time and extra hands to tackle the group’s semiotic functions like bosses, sharing activities like spinning, weaving and sewing (while dreaming, arguing, and plotting, I assume).

Then modernity came along. Like Bruce Banner exploding through his beige button-down as The Hulk, mechanization, mobility and trade seemed nice enough—till they shredded traditional dress to bits.

Something new was born: fashion. Dress was slow, bound to a specific place and people. Fashion was fast. It travelled. And it sold itself as choice.

Fashion was fed by colonization and the systematic exploitation, by Europeans, of people and resources. As cheaper and more plentiful materials like indigo and cotton moved around the world (based on the labour of enslaved peoples), so did new ideas about clothes. There’s no way to dislink fashion from capitalist brutality; that’s where it was born. In the world’s growing cities, women were literally locked into unsafe factories to mass produce clothes.

Yet, in her detailed analysis of women and fashion, called Sex and Suits, Anne Hollander argues that, alongside all this violence, women also used fashion to fight back and contest gender roles. In the nineteenth and early twentieth centuries conditions were ripe for women to snatch away masculine stylings like so many wigs and apply them to themselves, symbolically taking men’s power with them.

"Dress was slow, bound to a specific place and people. Fashion was fast. It travelled. And it sold itself as choice."

This is how Coco Chanel became the most important fashion designer of the era. Chanel rewrote codes of fashionable clothes, Hollander argues. If jersey was a coarse, low fabric, she made it high fashion. If full bosoms had been popular, she celebrated a gender-neutral flat chest. Chanel was also a fascist—a Nazi collaborator and an all-around despicable person. So let’s pay her no more praise and instead say that history called forth someone like Coco, whose fashion sense reflected women’s desperate craving for clothes that flipped the gender script.

Of course, economic shifts underwrote this hunger. Women around the world were leaving the home for paid employment. Fashionable clothes allowed some women (with money) to redefine themselves, but fashion was also a business that threw open its doors to many classes of women. The shop girl came into being, as did the fashion buyer, the owner of the tidy shop on Main Street and the model. Women in fashion made their own money, paid for cups of bad drip coffee on the way to work, rested sore feet in shiny shoes on the subway home, and, in between, wore what pleased them. Mostly that was skirts or dresses, but more and more, for the first time in history, women also wore—gasp—pants.

(A digression here to salute, in the style of the did-you-know–type memes described earlier, the US civil-war surgeon Dr. Mary Edwards Walker, an early champion of pants. As I learned in Pantaloons and Power, by Gayle V. Fischer, Dr. Edwards Walker was way over the army-issued skirt she was expected to operate in. So she adapted it, putting pants underneath. The US military accepted her hack. Civilians? Not so much. Edwards Walker was attacked, physically, for the radical act of getting comfortable in her clothes. Next time you wear slacks, strut a little for Mary, please.)

Women’s history and fashion don’t end in the last century, of course. Fashion is now a global, dizzyingly diverse, heavily polluting colossus. Meanwhile, traditional clothing did not disappear; women still pass those skills down, celebrate local forms of dress and blend them with trends.

But women’s history remains closely tied to fashion’s ongoing narrative. Women still make the bulk of fashionable clothes. Most recently, when the pandemic killed fashion’s buzz, many manufacturers fired thousands of garment workers without paying them owed wages. Garment workers (mostly racialized women and girls of the global south) stood up and forced companies to cough up some of the money—but not enough.

Women are still reworking signs, gender and the self through fashion. But if women deserve that opportunity, those carrying our history forward on factory floors worldwide deserve safe working conditions, respect and—let’s dream big here—a fair enough wage that they can enjoy some fashionable items of their own.

Marguerite Pigeon writes poetry and fiction. Her previous books are Inventory (Anvil Press), Some Extremely Boring Drives (NeWest) and Open Pit (NeWest). Untangling her arm’s-length preoccupation with clothes has been an odyssey. Spiritually northern Ontarian, she lives in Vancouver, where she works as a freelance editor and writer through her business, Carrier Communications.

May 17, 2022
Beautiful Books: Keeshig and the Ojibwe Pterodactyls