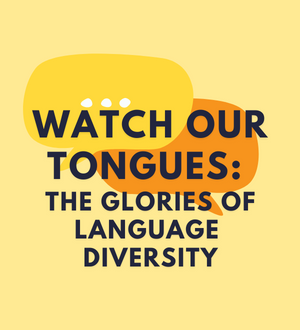 Watch Our Tongues: The Glories of Language Diversity

As the Canadian-born, solitary child of Southern Italian immigrants, I am constantly assimilating contradictory aspects of my childhood; I appreciate the tightrope balancing act speaking two languages requires, navigating context and communication styles in the same headspace or discussion. While the majority of my speech impulses are mainly influenced by my polite Canadian education, I have on occasion raised my voice—to make a point, crack a joke, or drown out the other speaker because they were annoying and wrong—and still slept soundly at night. Most nights.

On any given day in transit in Toronto, I hear multiple languages and many accents. The choir of human conversation has always cast a spell over me. I’m eavesdropping all the time, thrilled at the range of phonetics involved in aspirated consonants, extended vowels, guttural sounds, and words with trills. This interest has always been with me long before I’d ever heard the term “language diversity.”

During my training to become an ESL teacher, we viewed a training video (created circa mid-1980s, if I am an accurate judge of clothing and hairstyles that still give me nightmares), where the instructor spent ten minutes trying to get her students to pronounce “th,” a consonant cluster that is challenging for adult learners. My face flushed with frustration, reminded of interactions where people tried to embarrass my parents or deemed them less intelligent because they spoke with strong accents even when they had an impressive scope of vocabulary.

“Is it? I don’t know why. I could figure out she was agreeing to the date when she said Tursday,” I replied, emphasizing my mother’s pronunciation. “There is no other day of the week that sounds like Thursday.”

"Language is political. Language is the gatekeeper to opportunities. And language is fundamental to our core identity, central to the way we view the world and our place within our environment."

Likewise, soud is south. Birdday is birthday. Tink is think. The conversation’s context should have revealed the meaning, but listeners often took the approach that my family members had been incomprehensible. If I sound annoyed, that’s because I am. Language is political. Language is the gatekeeper to opportunities. And language is fundamental to our core identity, central to the way we view the world and our place within our environment. To state the obvious: communication is a two-way street, and some parlance cannot be translated into English. Meno male, as they say in Italian; a literal translation of this term would be “less bad,” but in la bella lingua the dictum means “Thank God.”

My first week teaching a literacy level ESL class, I bumped into one of my students on the stairs at lunch hour. Carlos was from Peru. He had some criticisms about my instruction; he’d been a teacher back home. He had trouble forming a complete sentence but wanted to know all of the elements—adjectives, nouns, prepositions. As far as I was concerned, he was putting the cart in front of the donkey. As we spoke, Carlos told me he’d taught drama, that he’d been an engaging and interesting teacher and used many physical techniques to make his students understand the lesson. Then he mentioned that he needed to lose weight, that he ate too many sweets and it showed. Also, it was bad for the health, and could potentially lead to diabetes.

At that point I gasped. Carlos was a stick figure, small and sinewy. I suspected he carried no body fat at all, and told him so. He clarified: we weren’t talking about him but me, not his weight but mine.

I laughed so hard, tears spilled down my cheeks.

Carlos was speaking Spanglish. I can’t speak Spanish, so I used my knowledge of Molisan (the Italian dialect I speak) to piece together our conversation. Some terms carried over, like interesante and dramático, and the ones that didn’t I understood because he mimed eating (a lot) and growing an enormous Buddha belly. I thanked him for his caring feedback and went on my way, my shoulders shaking with giggles.

Later, I mentioned the incident to several colleagues. Instead of finding it funny, several found the conversation unsettling and offensive. They suggested I needed to plan a lesson around cultural sensitivity. I simply couldn’t see the exchange as something to be upset about. I told them they should have been flies on the wall the previous summer, when I was cleaning a mirror in my father’s apartment and noted something about my reflection. Out loud, I commented that I could stand to lose some weight.

Without skipping a heartbeat my father said, “Yah. You should be lose few pounds.”

When I protested his blunt, inconsiderate approach, my dad looked surprised. “You want I should be lies to you? I’m you father. Means I want what is best for you and I thinking is better if you losing weight.”

I understood that Carlos, an older student re-starting life from scratch in a new country, in middle age, had enough trouble simply trying to find work that could sustain him and his wife. He was far from home, and trying to communicate, to connect, to be human in the face of adversity I could only imagine. Meeting him half-way on that journey as an instructor, was a priviledge.

In my creative writing classes, I show novice students how to break away from clichés and ask them to bring in phrases they might have access to in their ancestral languages. Idioms, be still my beating heart. This stuff is the bomb. It’s the cat’s pajamas. Truth be told, I’d much rather use the Thai expression, “One afternoon in your next incarnation,” instead of the bland, “it’s never going to happen.” I share several examples from a TEDBlog with them and a favourite saying that my father once taught me when I was not standing up for myself: “When you are the sheep, the wolf gets ready to eat.” Was a truer statement ever uttered in his village? I think not. In fact, this is the beauty of idioms, how they reveal the heart of the matter—the root of what matters, what is momentous, to a culture.

Language diversity offers us all an abundant and generous view of the human experience. The variety allows us to link our personal lives to universal observations and wisdom. We should worry about the languages going extinct at an alarming rate; we should excoriate the atrocities committed in destroying Indigenous languages and fund efforts to revitalize them.

Forget what I said. Communication is not a two-way street. It’s a twelve-lane super highway that requires skill to navigate. Let’s take the time to learn as much as we can about this topic of language. Maybe then we will all find ways to reconnect to our kindred humanity and be able to express this Kazakh saying from that same TEDblog, “I see the sun on your back.” According to the translation submitted by Askhat Yerkimbay, we would be telling each other a breathtakingly beautiful truth: “Thank you for being you. I am alive because of your help.” 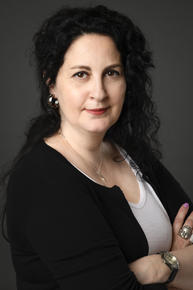 Eufemia Fantetti holds an MFA in Creative Writing from the University of Guelph. Her short fiction collection, A Recipe for Disaster & Other Unlikely Tales of Love, was runner up for the Danuta Gleed Literary Award and winner of the Bressani Prize. Her second book, My Father, Fortune-tellers & Me: A Memoir was released in 2019. She co-edited the anthology Tongues: On Longing and Belonging Through Language (Book*hug, 2021) with Leonarda Carranza and Ayelet Tsabari. She teaches at Humber College and the University of Guelph-Humber and works as a co-editor of The Humber Literary Review.