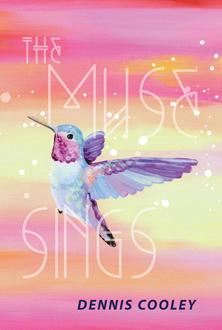 Dennis Cooley's The Muse Sings (At Bay Press) gives new lease to the relationship between poet and muse. Below, Cooley shares more about what brings 'oomph' to his writings and the challenges he took on to overcome the well-known trope of the muse, using the conventional as a jump-off point for this newly inspired collection.

The Muse Sings extends a practice of identifying a site that intrigues me, and seeking ways to write within it or off it. Other books over the years have gathered material around Dracula, my family, cosmonauts, my parents’ deaths, the alphabet, fairy tales, animals, and a Sinclair Ross novel. The challenge is to see where the focus can take me. What’s the potential? What might it open into? A matter of expansion and variation for one thing. What kinds of poems might it include? How to recast them? In tone, rhythm, voice, diction, style, form, point of view? There’s always a reaching for a what-more or what-else.

I try for a range, so the books include documents, lyrics, letters, metapoems, interrogations, meditations, crosswords, speakers other than the narrator. I have been engaged with the second-person a lot. I love the energy and speed that it can produce, and the vernacular voices it often foregrounds. The writing is shamelessly impure, a flagrant display of mongrel vigour I like to say. I want oomph in the poems, and flexibility in where they go.

In The Muse Sings I challenged myself to consider what could be done with the trope. It’s already there, well-known (in honour or scorn) in our culture. I suppose the most ready-made version of the muse would include a reminiscing poet (most likely male) and a distant and somewhat ethereal muse (almost certainly female). The poet would be taken over in some way by her visitation, often in reverie or recall, and delivered into speech that he hadn’t expected but always welcomed. The muse is our name for those times when something niggles at you, compels your attention, and impels you into expression you hardly knew was yours. Inspiration, I suppose. In some of the more dramatic versions the poet acted as secretary who wrote down what the muse dictated. The poem was delivered to the poet, received as a gift. There’s a risk in taking on something that is so embedded in convention and in readers’ suppositions. How, in Ezra Pound’s words, do you make it new?

I worked off the conventions by inventing versions of the muse as source and the poet as respondent. The poet—bemused, annoyed, expectant, hopeful, inept, prone to grievance—courts the muse. The muse plays a role as reluctant singer, resistant speaker, and active plaintiff. She lays claim to the words the poet would thieve. The poet fumbles his way in comical incompetence, seeks to endear himself and to comfort himself through mock indignation. So there’s that back and forth, often in overture and disappointment. In the book, as I said there, a “yearning and inept supplicant woos a muse inclined to withhold her favours, to feel irked with her role, and to resent his thefts. The muse talks back—quite a lot.”

the poet (almost) escapes with the muse