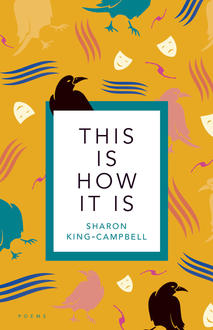 Sharon King-Campbell's  This Is How It Is (Breakwater Books) spans continents and subverts history to show us the interconnectedness of all things. Below, Sharon discusses the wholeness of being human, bound up in our own animal nature but also the inseparable character of our own thoughts, frustrations and passions — and how her poetry evolves out of what she calls "empathy practice."

See more details below
Tagged: this is how it is, sharon king-campbell, breakwater books

All Lit Up: This Is How It Is explores the interconnectivity of all things. It does not see the environmental crisis as separate from, for instance, the treatment of women. What did you want to get across in highlighting these linkages?

Sharon King-Campbell: I think we like to separate an “us” from a “them.” It’s a comforting and comfortable thing to do—you have a basic understanding with people who are the most like you, you can take shortcuts, you don’t have to work very hard to make yourself understood. But sinking into that behaviour has led to supremacist ideology…the idea that “we” are better than “they” are. And that’s the root—or at least, one of the roots—of sexism, racism, classism, ableism, colonialism, all of those horrible systemic isms and phobias.

And we do this with the natural world as well. The idea of humans as animals can still be pretty controversial. People have been trying to assert some division between “man” and “beast” for most of recorded history, but there really isn’t one. We’re animals. Christianity had a big hand in this idea of humans vs. nature: in Genesis, God puts Adam in charge of all of the other plants and animals, including Eve. Not all cultures have a foundation story that puts (male) humans above the rest of nature, but the culture that colonized and remains dominant where I live and in much of the world does. And this idea that we’re above, rather than part of, nature has led to the climate crisis we are now facing, and to the fact that we seem to be completely incapable of stopping it.

I promise the book is not as heavy as that just made it sound. But yes, that’s how I see the world and it is certainly all over my poetry.

ALU: Several of your poems imagine the lives of historical women. For instance, Clara Schumann, the German pianist and composer, and Cosima Wagner, second wife of composer Richard Wagner. What about these women’s lives (or the untold stories of their lives) inspired you?

SKC: I think it’s important to consider other people as whole humans with thoughts and goals and frustrations and passions, and one of the creative projects I always return to is to actively imagine what it would be like to live someone else’s life. Basically, empathy practice. Quite a few of the pieces in this book are from my daily writing practice, which I would often do while listening to Tempo on CBC Music, and the host of that show, Julie Nesrallah, will tell anecdotes about the composers, and often their spouses or children will figure in. So I heard on the radio that Cosima Wagner collected and burned every copy she could find of her late husband’s autobiography after his death, and I thought why? And it sent me down a little research rabbit hole and then the poem came out. That’s sort of how it goes every time. The idea is not to accurately tell these women’s stories— they were mostly literate and could (and in some cases did) write their stories for themselves. It’s an effort to imagine a possible story based on what I do know, to crawl into a fictionalized version of the historical woman’s head and find out what’s going on in there.

ALU: Much of your work here focuses on giving voice to others. Who are some of these people?

SKC: The more I think about this question, the more I think it’s not quite true—I can’t give anyone a voice. I imagine the voices I don’t hear every day, especially from women, and sometimes from other animals. But they’re all ultimately my voice. I think that’s the empathy project again—I am imagining myself in somebody else’s circumstances and seeing what comes out of me. If I lived a different life, I would be a different person. What would I think of Sharon if I were a humpback whale? Or a ladybug? One of the slugs I pick off the lettuce in my garden and flick away? That’s the question at the root of all of these pieces.

ALU: This Is How It Is includes several dramatic monologues that we understand are meant to be read aloud. As a theatre artist and storyteller, how does your performance experience inform your poetry?

SKC: I think it would be impossible to separate my artistic practices from each other. The same things that help me grow as a writer also inform my performance and vice-versa. As a storyteller, I can’t tell a story without speaking it out loud to myself first. I can’t find out what my character is doing until I’ve said the words aloud. So why would it be different for poetry?

It used to be that all poetry was to be read. When you’re doing a grade-school study of poetry, you learn about meter and rhyming schemes and it’s all very technical and rigid. But the purpose of all that is to make it stick in the reader. There’s something about the rhythm of the piece that resonates. You waste a rhyming poem by not reading it aloud. You haven’t experienced it. Not all poets still lean into the oral/aural quality of poetry, but I do.

We recently lost Lawrence Ferlinghetti, and as I was processing that loss I realized how important his work was to me in my early writing. When I was introduced to Ferlinghetti and Ginsberg, I was in high school and I’d made up my mind that I wanted to be a classical actor and perform Shakespeare every day. I knew how important it was to read Shakespearean poetry out loud, and Ferlinghetti’s work has the same quality without all the rigid stuff. I love form poetry, but this was when I realized that a poem doesn’t need the strict rules for the rhythm to work. I just loved that. I think the connection between performance and poetry has been rooted in me ever since.

SKC: I love transVersing and I’m so, so proud of it, but it would be disingenuous to say that I “wrote” any of it. transVersing (which you should definitely read!) is a play built out of the original writings of six trans* artists, and Bernardine Stapleton and I had to privilege of ordering those writings into a cohesive whole and directing the artists’ performances. My impact was strictly dramaturgical, and maybe a bit of cheerleading. Dane, Daze, Fionn, Perin, Taylor and Vero wrote that book.

So really, writing This Is How It Is has been a completely different kind of adventure. It’s my first book in a lot of ways.

ALU: We understand you wrote parts of the collection while listening to CBC’s Tempo with Julie Nesrallah. What role does music play in This Is How It Is?

SKC: I love music. When I said earlier that it’s impossible to separate my artistic practices, I include music among them. I didn’t focus on it professionally and I have had no formal musical education beyond about grade six, but music has always been an important part of my life and it’s one of my artistic refuges. Music crosses over into theatre all the time, of course, and I’ve done plenty of singing on stage. I’m mostly a singer, but if you want to hear some terribly executed piano, guitar, flute, or ukulele tunes, give me a call.

Often I will listen to a piece of music and set out to explain in words how it does what it does to me. There are plenty of pieces in this book about music, and they’re all attempts at this idea of conveying the emotional impact of music. I never quite manage it, but it’s an experiment I keep coming back to. I think this is also part of why I put so much stock in the spoken rhythm of the poems.

ALU: In your acknowledgements, you mention reading several Pedlar Press books while writing as well. Any you’d recommend?

SKC: Oh my goodness, yes. Pedlar has a couple of titles by Maleea Acker. Read her. Joanne Page’s Watermarks also stands out. 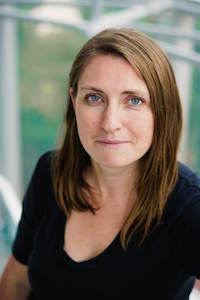 Sharon King-Campbell is a freelance theatre artist and storyteller. Her work has appeared in Riddle Fence and Word, and on stages across Newfoundland and Labrador. Sharon grew up in Ottawa and now divides her time between downtown St. John’s and a little yellow house in Winterton, NL.

April 4, 2022
Poetry Express: This Is How It Is + Sharon King-Campbell

April 14, 2021
Under the Cover: Imagining new worlds in Mirror's Edge

October 27, 2020 by Alex Passey
Fresh from the Farm: Fall Fare for Your Body & Mind from Jenna Butler's A Profession of Hope