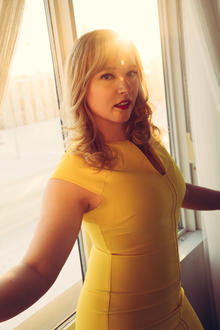 I’ve been oversharing all my life. My father worked in IT long before it was cool so I had internet access at home as early as 1995. By 1997, I was a 12-year-old writer for a feminist website of fellow tween and teenage girls. We luved 2 write like dis and exchanged period stories and boy drama on message boards while we wrote posts on main about the subversive feminism of the Spice Girls. The internet felt utopian in the late '90s. A safe, uncensored space where you could spill your heart out on your LiveJournal and reveal just enough about yourself as names like FunkyPeach_4u allowed.

Magazines like Sassy turned into websites like xoJane and confessional writing was suddenly everywhere. xoJane had an infamous page called It Happened to Me where people shared confessional stories about their life ranging from the banal to the bizarre to a piece that tried to warn women about Jian Ghomeshi a full two years before he was ever charged. In 2011, I submitted a story about a baffling incident of being sexually assaulted by two boys I used to babysit as a teenager. When I wrote the piece, I had been working to end sexual violence in Canada for a few years and thought the story would be an opportunity to have a nuanced conversation about the complexity of ending rape culture.

Looking back, I think, “A nuanced discussion? On the internet? Oh, to be that naïve again!”

Sure enough, the vitriol started pouring in almost immediately with the comment section overflowing with incredulous haters who thought I was a liar, a drama queen, or worse. The hatred soon leaked from xoJane’s comment section into other areas of the internet. One blogger wrote a blog post about how I needed to be sterilized for the protection of children. The blog post had over 200 comments.

May is Sexual Assault Awareness Month in Ontario and I can’t stop thinking about the cost of all that awareness.

The internet has become more confessional than ever and sexual assault survivors have almost limitless options for sharing their story. No longer relegated to personal blogs or Livejournals, survivors have taken to social media in droves since #BeenRapedNeverReported and #MeToo started trending around 2015. The feeling was “If only people knew how bad things were. People are just ignorant to the extent of the problem. We need to show them the horrors of sexual violence and then they’ll care.”

"When we share our stories, we’re announcing to the world “'I am not ashamed.'”

So, confess sisters. Confess to every hug-that-lasted-too-long, leering guy on the bus and date that ignored your no. Spill your guts about the time your boss cornered you and that confession will feel like justice.

As an OG confessional writer, I can’t dismiss the cathartic potential of putting your trauma into words. Sexual violence is meant to humiliate its victims and there is power in refusing to carry that weight alone. When we share our stories, we’re announcing to the world “I am not ashamed.”

But what so many of us discovered is that our silence did not protect us but neither did telling our truths.

My disastrous experience with xoJane was the first of many instances in my life where I would pay dearly for speaking my truth.

In 2015, I came forward about being sexually harassed at the Royal Military College while trying to teach the cadets about...sexual violence prevention. The irony made for perfect clickbait and soon, I was all over the news and in turn, social media. The backlash was swift, nasty and still requires me to need a security detail every time I speak in public.

Early last year, a very famous basketball player died suddenly. I kept seeing otherwise progressive, survivor-minded people fawning over him and ignoring the fact that he had apologized to a woman in civil court for sexually assaulting her. My simple tweet asking folks to remember this fact brought a cascade of hatred my way. I received 450,000 threatening tweets and had to lockdown all my social media for weeks. One threat was so credible that police advised me it was not safe for me to stay in my own home. I ended up fleeing the country for a week in the hopes that it would die down. The biggest irony of all is that I had to halt promotion of my upcoming memoir; I had to stop promoting my book about violence against women because I was experiencing so much violence.

Resilience is Futile: The Life and Death and Life of Julie S. Lalonde is my memoir of being stalked by an ex partner for over a decade. It launched on March 11, 2020 because if it wasn’t for bad luck, I’d have no luck at all.

The declaration of a pandemic halted my book tour after two stops and I was forced to promote my book through social media and interviews I gave while sitting in my closet to dampen the echo. In interview after interview, I was asked about catharsis; “Surely, writing a book about being stalked must have been so healing!” they mused. I wish they were right. I really do.

But at no point did I have “Write a book about my deepest darkest secrets” on my vision board. It was never something I had set out for myself when starting my healing journey.

What I really wanted to do was shout my stalker’s name from the rooftops. I wanted to scream his name in the face of everyone I met. Keeping his name to myself felt as heavy as keeping the violence to myself all those years.

The “choice” not to share his name is a complicated one. As a frequent target of harassment, I do not want to give my haters more ammunition to come after me. I do not want to drag his family’s name through the mud when they are only partially responsible for what he did to me. There are many philosophical reasons, too. It’s my story and he should remain a footnote.

And there are legal reasons, too.

In 2013, two sisters in Ancaster, Ontario were fined for telling family members that their uncle had sexually abused them. The uncle sued them for libel and won. Their decision to break their silence cost them $125,000. Just last month, a mother in Kitchener was fined for sharing her court documents with family members; she was criminalized for breaking a publication ban on her name. As you read this, a messy court case is unfolding in British Columbia that will decide the Freedom of Expression of sexual assault survivors and their allies.

"Sharing your story means carrying other people’s stories, too."

My abuser is dead. He cannot sue me but his family can certainly try (and have threatened to). I have the law on my side and they would never win but I don’t want to fight anymore. I’m tired.

Sharing your story of trauma, over and over and over again, is exhausting. To bare your soul, whether on the page or to an audience, is to flay yourself, over and over again. It is bearing your deepest, darkest secrets and hoping that it’s met with understanding and validation. And don’t get me wrong—many times it is. Before the pandemic robbed me of a full book tour, I had the opportunity to read passages of my book to an understanding audience who then came up to me for hugs under the guise of getting their books signed.

But there is weight to that, too. Sharing your story means carrying other people’s stories, too. As the storyteller, you understand the deep longing of those who share with you because you’ve been there, too. But it’s not a symbiotic relationship. It’s one sided. The assumption made of every writer who has dared to confess is that they are free now. If you have enough resilience to speak your truth aloud, then surely you can handle hearing someone else’s.

I get it. The purpose of a memoirist is to make people feel seen.

The first time I ever saw my experience of PTSD represented was when I read Gabriel Mac’s Irritable Hearts: A PTSD Love Story. Mac endured massive backlash from feminists who felt Gabriel’s endorsement of kinky sex as a form of healing from PTSD was glamourizing violence. The crooked, and flawed, road to healing made me feel better about my own attempts at getting well. When Chanel Miller gave her victim impact statement for Buzzfeed to publish, I was not surprised to learn that millions of people read it. Her statement, and subsequent memoir, beautifully unpacked the complexity of seeking “justice”. Reading an advanced copy of Glen Canning’s upcoming My Daughter Rehtaeh Parsons, I wept as he described the exhausting work of being both a survivor and advocate. I felt seen.

And that’s where I get stuck.

I don’t know how to reconcile the desire to share stories of sexual violence with the need to protect the storytellers. There is undeniable power in seeing your story reflected but who is keeping us safe when we break the silence? If survivor stories were the silver bullet to dismantling rape culture, wouldn’t it have happened by now?

I struggle to square my TMI tendencies with my belief that we need fewer survivor stories and more system smashing.

I don’t have the solution. But I hope my words nudge you to seek those answers, too.

Julie S. Lalonde is an award winning women's rights advocate and public educator. Franco-ontarienne from rural Northern Ontario, she is based in Ottawa. Her memoir Resilience is Futile: The Life and Death and Life of Julie S. Lalonde was published in 2020 by Between the Lines.