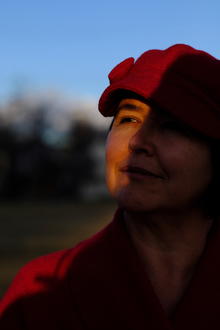 It was a rainy morning and we hoped the tarp would hold. It was, after all, just a little too small to tuck completely round the giant, so, as we wound along the scenic highway, I kept a weather eye backward, in case the billowing ripped loose the straps, loosening a sail big enough to sweep our truck out into a very brief hang glide.

We’d borrowed the big maroon pickup from a local Elder, and my fearless director entertained me by recounting the astonishing web of familial relationships surrounding this truck and its owner. Now that I come to think of it, this might have been a spell, a way of encouraging all those spirits to think of us kindly as we hurtled, precariously flapping, down the wet and winding roads. And we might have needed that. Behind us, under the tarp, an occasional ominous groan, and a cracking of joints, kept my ears twitching.

I had come to the Okanagan to write The Great Indigenous Play (or Novel, maybe, or Historical Fiction, or maybe it would emerge best as Poetry). Somehow, that hadn’t yet happened. I did manage to find myself juggling three jobs in the community, which at the very least dignified my procrastination, if not entirely fooling my inner critic.

Behind me, the beast groaned on, straining against its bonds, leaning into every turn of the whipsnake highways. Mentally, my inner tarp flapped and strained to keep hidden all that I was avoiding. I could be sitting at my desk, writing. Instead, I was racketing through the rain toward yet another low-tech, ill-paid, community theatre production. One of my jobs was youth drama worker, which can be described variously as "helping bring living cultural traditions into the future," "facilitating innovation and creativity for at-risk youth" and "herding cats."

Today, if we made it to the venue, I would be doing all that in a coop. Today, my putative assignment was to stage manage our show, and act as technical director—which is to say, push the button on the CD player, and create atmosphere with (turn on and off) such simplistic lighting as we expected.

Held in a web of prayers and cigarette smoke, we arrived intact, and burly men of the community surged forward with manly cries, intent on vanquishing the beast. There were four of them; I left them to it, content that the director would direct them. Did I neglect to mention that the beast we were hauling that morning, feature piece of our set, was a ten-foot diameter, rainbow-painted spinning wheel? "The Wheel of Culture" was our parodic show concept, and we’d handed the job of building the actual wheel to a sculptor who, for reasons inscrutable, could not be convinced that a lesser diameter objét (or even a hinged piece?) could convey the concept as effectively, when touring via borrowed pick-up. Of course, he was also the chap who responded to my instruction (mainly for benefit of the teen apprentices) that stagehands wear black, by turning up for his volunteer turn in a blinding white pirate blouse, visible not just in the back of the audience but surely from space. Brilliant. Still, he was one of us; and that’s another story. And the point is, as a tiny, barely-funded youth initiative, we could not afford to reject his help.

On a dark and stormy midweek morning, not a single volunteer had offered to join our ship of fools; the third member of our staff was home with her sick kid. Now, our director was busy taking attendance and paying/soothing the cast’s van driver, occasioning a remarkably nimble vocal dance between unquestionable authority and bottomless sympathy. The driver hunched and ruffled, our dancers kibbitzed and gazelled. The youth group who’d invited us were being organized into front of house crew by their own director (recognizable by that tightly controlled tic and drill sergeant voice). All the remaining adults of the host community were manhandling the wheel.

Me, I had to figure out the lights. I went on round to the people door, which opened with a creak that rasped like roosters.

It was great to find there actually were theatre style lights. One, aptly, even sported large barn doors, those metal flaps that allow for certain directional refinements. Perhaps too aptly, the barn doors were awry, such that a large chunk of stage lay in shadow. With eight dancers, plus the beast to light, we could not have this.

It was up to me to solve this lighting problem.

I looked round and spied a clump of likely looking lads who’d somehow not yet been organized, and claimed them as my own. They cheerfully fetched me the sum total of the tech tools in the house, amounting to: one very ancient oil-derrick style wooden ladder, whom I dubbed Bessie, and one crescent wrench.

As a teen girl, I had pined for sufficient cool to even look teen boys in the eye, let alone anything more. Ironically, that day, long years later, as their eyes owled round to me, with the wrench swinging lightly in my hand, I felt a tingle that might just have been, finally, the unfurling of coolness.

For this, I must thank the inimitable man I shall herein call The Cat. Though I did formally study the rudiments of lighting and sound at university, I actually owe most to this dark wizard, who, back in the '80s, held our throng of scruffy students and wannabe artistes in awe as he swung from the pipes in our ancient dive of an indie venue, creating serviceable tech from wreckage by dint of sheer bloody-minded genius, and duct tape.

"Boys," I drawled, giving the wrench a twirl in what I hoped looked like an unflappably competent, indie venue techie manner, "got any duct tape?"

In those days I smoked (you would have, too). So, while they hunted up the tape, I took a moment, hunching in the meagre lee of the stage door, to imagine myself again mantled in the black leather jacket, complete with "Don’t Panic" button pinned to the stand-up collar, that The Cat had loaned me as a sign of fellowship, back in those indie days. I imagined myself six feet tall and saturnine, feline and surly, commander of all paraphernalia electrical.

"It is possible to do things with a wrench, duct tape, and attitude, that are not easily described to the uninitiated."

Smoke done, I was ready. I waved a languid paw to direct my crew as they rolled old Bessie into position. I picked the sturdiest pair of them to hold the ladder, trying not to think of how resilient a landing pad they might make, should Bessie crumble. At the foot of the ladder, I laid a nonchalant hand on Bessie’s flank, and shook the structure insouciantly, fearlessly. I slung the wrench darkly into a hip pocket, shoved the tape roll up my arm like a warrior’s cuff, and with a nod to my crew, began the ascent. Around me in the rafters, ghostly wings rustled.

It is possible to do things with a wrench, duct tape, and attitude, that are not easily described to the uninitiated. So, suffice it to be said that, up there alone in the feathered, dusty darkness, I did not panic. I dinted with all my will. And I can still feel the warm glow of that, both from the re-rigged light inches away, and from the awestruck young faces in a circle round ole Bessie’s feet. The ghost chickens round my shoulders became tame as dusty, inanimate rafters. Descending, I came gliding like a panther, all mojo, purely cool.

The Cat might’ve re-rigged that light faster and smoother than I did. I do not pretend to his throne, the best techie I ever saw. If only that were the extent of the task, I would rest easy whatever his imagined judgment, even if he’d squinted his left eye, the serious one, at the particulars of my method of ensuring that light would throw a properly wide beam. But my former mentor could never critique what happened next.

However arcane and complex the magicks of the lighting rig, there is nothing therein that could serve to salvage a teen dance troupe wreck. Their tidal ways are a mystery even to them, and the surges of long-legged sturm und drang can drag down not just the weak gazelle, but also the unsuspecting panther. I shall not have the space here to explain how the frenzy built, the tectonics of it, the details of the grande blowout I’d missed while scaling my own mystical peak. Whatever the cause, one dancer simply could not go on. She huddled in the backstage wilderness, shivering and clutching a long-stemmed appendage, ruined for life, I tell you, ruined. The rest of the herd stamped and bleated, heartbeats away from a mutinous stampede.

And the audience were at the door. The director was my boss.

The show must go on.

I am not a dancer. Though I possess the inborn human urge to rhythm and to joyous expression through movement, that is not the same thing. But I knew the show, I’d helped them write it. And, while out of tape, I was in my power, and by sheer mojo, squeezed myself into a 14-year-old’s leotard. Mojo stretches just so far, and lycra, too, has its limits. Yes, the show went on. Fully, brightly lit.

Sometimes, at night, I can still hear a distant thread of sound unraveling...is it hysterical laughter? Or merely hysteria? A cackling, as of vengeful, ghostly hens.

Her bread recipe was published in 2019, in the University of Alberta cookbook Our Stories Our Food. Anna Marie blogs at prairiepomes.com

December 13, 2018 by Tan Light
In House: Now Or Never Publishing

September 22, 2015
First Fiction Fridays: Do You Think This Is Strange? by Aaron Cully Drake