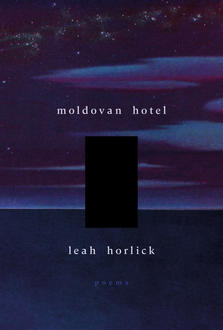 We welcome Leah Horlick to our Poetry Express series with her collection Moldovan Hotel (Brick Books), in which she explores the complicated history behind the displacement of her Jewish ancestors, and the intergenerational trauma of the Holocaust that extends itself through conscious and subconscious worlds.

Read on for our Q&A with Leah where she shares more about her experience visiting the still-intact plots of her ancestors in a Romanian cemetery, the moment of inspiration that came to her from a Yiddish play written in 1906, and her dream escape to visit relatives and friends safely. Plus, read the poem "Every Name Means Across the River" from her collection below.

During the month of April, you can buy any of our featured Poetry Express books for 15% off + free shipping in Canada. Just use promo code NPMexpress at checkout. Or you can find it at your local independent bookstore.

Leah Horlick: I started work on Moldovan Hotel while on a writing retreat on Bowen Island with Amber Dawn, Anoushka Ratnarajah, and Adèle Barclay—gorgeous and brilliant company, for starters. I had gone far down an Internet rabbit hole, and found that the Jewish cemetery of the village where my great-grandparents had lived in Romania had been the subject of a major restoration project. We often talked about the shtetl in our family, but had always assumed it was destroyed in the Holocaust. And then here were all these photos online of graves of our ancestors dating back hundreds of years—I was stunned, and also haunted. It’s a miracle for a Jewish cemetery in that region to be mostly intact, let alone restored, rather than an unmarked mass grave or something vandalized beyond recognition. Turns out we had not only vastly underestimated the historic size of the community, but it was still a town (with a much, much smaller Jewish community) and located in a country called Moldova. The more I read, the more I realized we had been broadly attributing our family’s displacement to fleeing Nazism, when there was a much more complicated history at work—and none of us knew anything at all about contemporary Moldova. The Canada Council funding I received meant I could not only visit the cemetery myself, but do some firsthand research to answer some of my family’s questions and lay the experiential foundation for the poems in Moldovan Hotel. 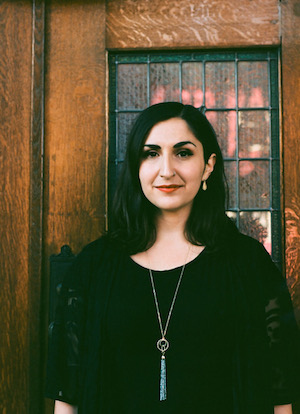 [Image Description: A front facing picture of the author, standing in front of an aged wood door with a center pane of blurred glass that is surrounded by a green frame. She is a light-skinned person of mixed Jewish heritage with black hair and is wearing a black top with a long necklace that ends in a blue tassel.]

LH: My most unlikely, totally-out-of-nowhere, lightning-bolt source of inspiration was a Yiddish play by Sholem Asch called God of Vengeance, which inspired my poem “Couple Flying Over Village” in Moldovan Hotel. I was struggling with how to integrate queerness into the text and then found this amazing piece of theatre—written in 1906, in Yiddish, it tells the story of a young Jewish woman whose family owns a brothel, and how she falls in love with one of the women who works there. There is an incredibly sweet, vivid sex scene and a monologue (in the rain!) about sex work and economic freedom for women. When it debuted in New York in 1907 it was the first-ever lesbian kiss on Broadway. And in the first language of my grandparents! I couldn’t believe it. I was also very moved, having learned that the region where Moldovan Hotel is set was a major centre for women in sex work because the fine for operating was much, much lower than what you could expect to earn. I read the entire play in one sitting, while crying, in the Mount Pleasant branch of the library in Vancouver, feeling this incredible echo between queer & trans people in my contemporary and historic communities. (An early version of my resulting poem can be read online thanks to ARC magazine, who kindly shortlisted it for their 2018 “Poem of the Year” award—or you can find the expanded version in Moldovan Hotel.)

LH: Oh, certainly. I hope it continues to change! I am always learning so much from other poets about what the form can make possible, how it can shift, and what it might become in the future.

LH: Most recently I loved Last Night at the Telegraph Club by Malinda Lo; I am an avid YA reader and huge fan of her previous work. I am so eagerly anticipating Selina Boan’s Undoing Hours, and Rebecca Salazar Leon’s sulphurtongue, both poetry debuts forthcoming this spring. I also can’t stop thinking about Grey All Over by Andrea Actis, also from Brick Books; I’m very much looking forward to the book club we’ll be hosting together at the end of the month—more information on the event will be available here.

LH: Truthfully, due to the pandemic, it’s almost painful to imagine an ideal. The dream escape at this moment would be a safe visit to my family and a totally risk-free chance to hug my friends—not to mention a chance to get to properly know my new home here in Mohkinstis/Calgary in a way that feels more normal! I am tremendously privileged to be able to adhere to public health protocols in relative safety & comfort, with lots of prairie sunshine and a large stack of books thanks to the curbside pick-up system at the library here. I will happily dream big again though, once it doesn’t feel like tempting fate!

A poem from Moldovan Hotel

EVERY NAME MEANS ACROSS THE RIVER

Govern there as if Romania had been ruling these territories for two
million years. What will happen afterward, we’ll see....
—Dictator Ion Antonescu to Gheorghe Alexianu, head of the occupation
regime of Transnistria, December 6, 1941

Dear cousins,
Your labour camp
is its own republic.

The mass grave wants
its independence.

The Soviets still
reach their long
arm across the river —

Abkhazia, Nagorno-Karabakh,
South Ossetia. Statues of dead
men who made

your dead
are everywhere.

around the Black Sea. Transnistria
has its own president

the same way Dachau
is a town — Dachau has always
been a town. It was easier

to visit. Children rode
their tricycles around and

around the camp. The nuns —
there were nuns there — they had taken a vow
of silence, a gold cross silent

on the roof, their long habits
sweeping the silent ground.

Leah Horlick grew up as a settler on Treaty Six Cree territory and the homelands of the Métis in Saskatchewan. Her first collection of poetry, Riot Lung (Thistledown Press, 2012) was shortlisted for both a ReLit Award and a Saskatchewan Book Award. In 2016 she won the Dayne Ogilvie Prize, Canada's only award for LGBT emerging writers. That same year, her second collection, For Your Own Good (Caitlin Press, 2015), was named a Stonewall Honor Title by the American Library Association. In 2018, her piece "You Are My Hiding Place" was named Poem of the Year by ARC Poetry Magazine and shortlisted for inclusion in the 44th Pushcart Prize by the Pushcart Board of Editors. She lives in Calgary.

During the month of April, you can buy  Moldovan Hotel and any one of our other featured Poetry Express books for 15% off + free shipping in Canada with promo code NPMexpress. Or find them at your local independent bookstore!