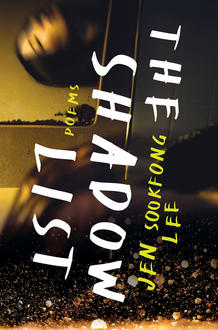 Vancouver-based writer Jen Sookfong Lee embraces personal lyric in her poetry debut with The Shadow List (Wolsak & Wynn), an intoxicating collection vivid and frank, that calls us to question the politics of who gets to choose and who doesn't. In language that is gripping and urgent, the reader is invited to follow the experiences of the narrator as she creates space for her desires and for herself.

Below, Jen talks to us about how writing in fragments paved her way to poetry, how growing up in East Vancouver shaped her writing practice, and a benefit of reading a memoir that makes her mad. Read on for our interview and a poem from the collection.

Jen Sookfong Lee: My book, The Shadow List, is a collection of poems that dive deeply into the hidden needs and desires of women, particularly women who might be racialized and are often especially invisible. I had published three novels in nine years, and my son was a toddler, and I found I just didn’t have the bandwidth for another novel. I began writing in fragments, which became poems, and I don’t think it’s a coincidence that this all started when I found my personal time to be the most limited, when it felt like my own needs were being pushed aside. My son was really small and we were renovating an old house. I didn’t have six hours at a time to write. I had 20 minutes, or even fewer sometimes. And poems, for me anyway, could fit into those spaces. 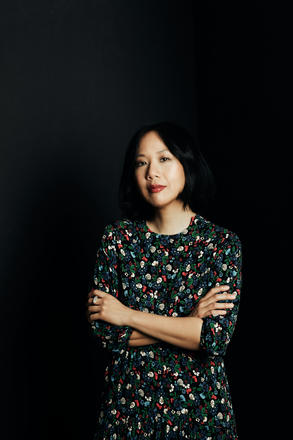 [Image description: A front-facing photo of the author standing against a black background with her arms crossed and a relaxed expression on her face. She is of Chinese descent with chin-length black hair and brown eyes, and is wearing red lipstick and a green, red, and white floral dress with quarter-length sleeves.]

JSL: I don’t know if this is unlikely exactly, but pop culture has always been a huge source of inspiration for me. I come from a family and neighbourhood in East Vancouver were there were never any artists (although Paul Hyde did live two blocks away from me when I was a kid, which was very thrilling for 10-year-old me), but in which everyone knew what was on TV and the best movie to watch. My parents were engaged with a magpie collection of pop culture phenomena—the '80s Hong Kong gangster movies with Chow Yun-fat, the album White Christmas by Bing Crosby, the Cantopop sung by Anita Mui—and I think this multiplicity of accessible culture really laid the foundation of what would become my writing practice.

JSL: I had a very classical English Literature education and I think, when I was younger and starting to write poetry, that I tried really hard to be Big L Literary. These were the poets that I saw as having a seismic impact on books and other writers. But as I started to write this collection, I understood that the subversion in my poems isn’t about literary fireworks, but is actually about voice and who gets to speak. Can an Asian woman write poems about desire and the physical self and the stickiness of intimacy when all we’ve ever read are those types of narratives from white women? Well, maybe we’re not allowed, but I tried.

JSL: These days I want to be transported to a place and time where I don’t have to worry about viruses! I just finished reading In the Land of Men by Adrienne Miller, who was the fiction editor at Esquire in the '90s, when David Foster Wallace and Dave Eggers and Jonathan Franzen were at their most famous and had formed their own bro clique. Even as that memoir makes me mad, it also takes me backward in time and I can pretend none of this pandemic stuff exists.

Lately, I read it was never going to be okay by jaye simpson, Mythical Man by David Ly, and My Art is Killing Me by Amber Dawn. I love these poets, partly because they are just quality people, but also because I am really drawn to poetry where I can see threads connecting the words to me as a reader. I want to burrow in those books!

JSL: I would very much love to be on a warm beach, maybe in Thailand, sitting with my feet in the surf, reading nothing and thinking nothing.

But It Protects You from the Fire

Yes, it’s a hard shell but fine
and thin, impenetrable, at least,
for now. It’s two years old, polished
smooth by the smoky summer
wind that smells sweet and chemical
from the wildfire burning to the northeast.

(Four months ago you stood
on a hill and felt the late winter
wind on the backs of your legs,
a push that could have tipped

you over the edge if you
were easily surprised. You squinted
toward the lake, at the low bush
and birds that flew only inches
above the ground. You didn’t know

then that a fire would start
just over there, that where you stood
was the spot people would stand
in the August sun and gauge

how quickly the flames might lick
and spit toward town.
There were no signs then,
but there never are.)

In the night, you listen to the same
song on repeat, the one with a beat
that feels like a kitten heart, nested
in your pocket, small but insistent.
It’s an illusion, the softness
of that beat, the fluidity of the bass,
as if your inner softness is visible

and maybe even touchable
by the right person if he asks nicely.
The man rapping says he wants a wife.
He says it so easily and you believe,
for three minutes, that this is the wish
of every man, or at least the one
who hasn’t come back to you yet.

You place four different outfits
on the bed for tomorrow. Any
of them will do but you deliberate
anyway. You put away the peasant
top with the sheer sleeves,
the Mary Janes with the inverse heel.
What about the red leather pants?
Yes, always those.

The shell is lacquer, inflexible
and shiny in the right light. One day,
it will crack – in the fall rain
when you swell from the inside
out, or maybe when your mother

finally speaks to you again – but for now
this is what keeps you intact. You look
like a woman with form and purpose,
one who could throw a grenade
into an innocent crowd
without feeling a thing.

Jen Sookfong Lee was born and raised in Vancouver's East Side, and she now lives with her son in North Burnaby. Her books include The Conjoined, nominated for International Dublin Literary Award and a finalist for the Ethel Wilson Fiction Prize; The Better Mother, a finalist for the City of Vancouver Book Award; The End of East; Gentlemen of the Shade; and Chinese New Year. Jen teaches at The Writers' Studio Online with Simon Fraser University, edits fiction for Wolsak & Wynn and co-hosts the literary podcast Can't Lit.

During the month of April, you can buy  The Shadow List and any one of our other featured Poetry Express books for 15% off + free shipping in Canada with promo code NPMexpress. Or find them at your   local independent bookstore!