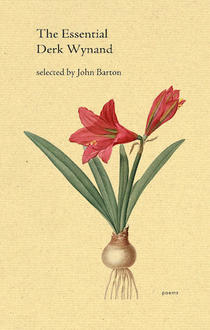 The Essential Derk Wynand, selected by John Barton (Porcupine's Quill) includes a body of work that the poet began in the 1970s. While at surface the collection touches on both public and private aspects of daily life, Wynand intelligently delves much deeper into our emotions—mapping the human heart though all aspects of love.

Read on for our Q&A with Derk where he tells us more about how a publisher's letter would spark the inspiration he needed for completing an earlier collection, and staying loyal to prose poetry masters while always keeping his ears open for "new good sounds." Plus read "An Ideal Place" from the collection below.

All Lit Up: The Essential Derk Wynand spans decades of your work from 1971 to 2010. Has your idea of what poetry is changed since you began writing poems?

Derk Wynand: My loyalties have stayed fairly consistent (Eugene Guillevic, W.S. Merwin, Louise Glűck; and the prose masters of poetry, Kafka, Joyce, Beckett, Borges), but poetry, and poets, have moved on, adapting to new technologies and a less Eurocentric world. While I’m often baffled by the cut-and-paste, self-aware approaches steeped in contemporary identity politics, I try to keep my ear open for the good new sound, while covering it to deflect unbridled, uncomposed fury. 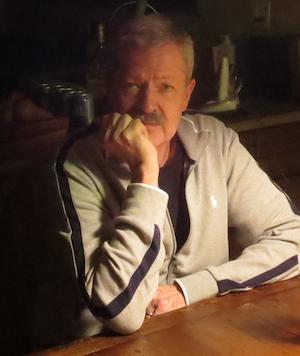 [Image Description: A photo of the author looking directly into the camera while sitting behind a wood table. His elbow is perched on the table with his hand in a fist sitting below his chin. He has short grey hair and a moustache. He wears a beige zip-up sweater with a brown stripe from shoulder to wrist. ]

ALU: What words would you use to describe your poetry?

DW: In the late 1970s, in an introductory talk to my first-year creative-writing workshop, I asked my students to submit a one- or two-page poem, any style, in time for us to discuss it during the next week’s session. Besides length and due date, I imposed no further constraints on them. They were frustrated when I told them I had no recipes, and I in turn was frustrated by their frustration. The next morning, I wrote a prose poem about a cook at a cooking school, one who had no recipes. Eventually, it became One Cook, Once Dreaming, a book I may never have finished if I hadn’t received a letter from a publisher who had read several “cook” pieces in an issue of Canadian Fiction Magazine. Though a different publisher brought out the book, that letter encouraged me to finish it.

DW: Dorothea Grůnzweig, a German poet based in Finland, has a new poetry collection, Plötzlich alles da, that has me testing my translation skills again. David Zieroth’s The Alfred Gustave Press keeps turning out chapbooks by other poets that often speak to me, including Catherine Owen’s Patullo. Jenny Erpenbeck’s German novel, Gehen, Ging, Gegangen (Going, Went, Gone), impressed me so much in translation that I’m reading it again in the original. Srikanth Reddy’s Underworld Lit stretches genre in magical ways. My former students keep outwriting me, in fiction and in poetry: Michael Kenyon, Travellers May Still Return; Chris Hutchison, In the Vicinity of Riches; Marlene Cookshaw, Mowing; Gillian Wigmore, Night Watch. John Barton, Patricia Young, Eve Joseph, Patrick Friesen–anything and always, and the amply imaginative poems George McWhirter sometimes attaches to his emails.

DW: Post-Covid, I hope to go to all the galleries that Eva, my late wife, and I never managed to visit, the Prado, Uffizi, Hermitage, and end up anywhere south, preferably in a cartel-free Yucatan, where I change personalities and laugh more.

A Poem from The Essential Derk Wynand

In this cave, no one needs to drag

his shadow up the wall toward

an elusive sun, no allegorical marker

marks how far we keep falling

where once shellfish had worked

Time, wherever it was, has dropped out

of the space-time continuum.

back into the stalactite mysteries,

of which, in this timelessness,

we think we know a thing or two.

The angelic. The earth. The imagined

through nothing down to clear water.

We have forgotten almost everything

we have read of Plato and here

that does not trouble us. The small light

far ahead guides us well enough.

Up there, the protected species endure.

Snakes with their innocent poisons fall

from the palms onto the necks

of innocent creatures, in a natural cycle

into which we must surely fit.

Derk Wynand was born in Bad Suderode, Germany, in 1944, not quite a week after D-Day. He arrived in Vancouver with his mother and brother in the fall of 1952, half a year after his father had come to Canada to establish a new life for himself and his family. After receiving his BA in English and philosophy from the University of British Columbia in 1966, Wynand taught for the Berlitz School of Languages in Montreal and Drummondville before returning to complete an MA In creative writing at UBC in 1969, where he studied with J. Michael Yates and Michael Bullock. While there, he began to translate the works of H.C. Artmann and others, a practice he continued during his time at the University of Victoria, where he taught from 1969 to 2004, serving two terms as chair of the Department of Writing and working in many capacities for The Malahat Review, including as editor from 1992 to 1998. Soon after he started teaching at UVic, he met his future wife, Eva, who provided the impetus for much of the work that followed, collected in eight books and three chapbooks of poetry, and in an experimental novel. He lives in Victoria, BC.

During the month of April, you can buy The Essential Derk Wynand and any one of our other featured Poetry Express books for 15% off + free shipping in Canada with promo code NPMexpress. Or find them at your  local independent bookstore!