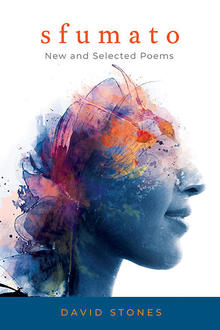 In sfumato (Blue Moon Publishers), poet and performer David Stones collects new and previously published poems that explore the human experience. In bold, striking pieces that are at turns playful and pensive, life, love, and loss are keenly observed and interpreted. This is an artful collection of poems that invite the reader to see themselves in the poet's mirror.

As part of our National Poetry Month celebration, David tells us how his book was inspired by a painting technique (sfumato) of blending colour and tones into one another, that iambic pentameter is his version of counting sheep at night, and shares an intriguing fact about the Notes app on his phone.

Read on for our full interview with David, and a poem from sfumato.

During the month of April, you can buy any of our featured Poetry Express books for 15% off + free shipping in Canada. Just use promo code NPMexpress at checkout. Or you can find it at your  local independent bookstore.

David Stones: Well, my latest collection is called sfumato, which loosely translates from the Italian as “smoke like.” Sfumato is the painting technique more-or-less invented by Leonardo da Vinci, the interplay of light and shadow at work within the gradated layers of paint he used to depict the opacity of human flesh, the light held and released by the folds of fabric. My poetry is a kind of literary sfumato, an abstruse weave of the human soul. In describing his sfumato method da Vinci once referred to it as “focusing on the out of focus,” and that’s what I try to do with my poetry, to draw attention to that which might otherwise go unnoticed. In exploring the three big Ls of life, love, longing and loss, I draw upon observation and an interpretation of events around me to expose and ventilate diverse dimensions of the human experience. The collection comprises close to 90 poems, grouped into four sections that roughly correspond to the four layers of paint da Vinci used to produce the sfumato effect: white lead bed; opacity of earth; laying down shadow; and varnish for our sins. As one commentator put it so nicely in a recent review, sfumato is an “apt metaphor for the hazy boundaries between head and heart.” 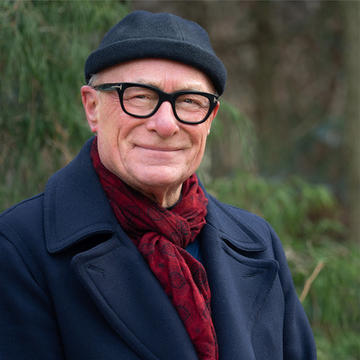 [Image description: An image of the author smiling into the camera. The photo is cropped at his chest. He is a light-skinned man with greying hair and eyebrows and is wearing a navy blue peacoat with a red scarf, a navy hat, and thick black-rimmed glasses. He is standing outdoors; the background is blurred revealing trees.]

DS: I have two, actually, and they’re rather antithetical. Often when working through an idea or a poem concept I go for a brisk walk. Rather Keatsian I suppose, but the singular purpose of walking and the robustness of the exercise serves to focus my mind and spur my imagination. I find it a very good method for breaking creative blocks, a way to move me to the next layer or segment of a poem. As I stride I talk to myself constantly, normally a soft whisper. For me, walking and verbalizing has been a very productive creative combination. And on the other end of the spectrum, I frequently build a line or two as a way of falling asleep. Some people count sheep; I have iambic pentameter going on. I like going to bed with a line or word problem that I need to sort out. I know the line exists, I know the exact word combination is inscribed somewhere. I just have to be patient and it will come to me, like a gift. The challenge then is to recall it in the morning. That’s where the Notes app on my mobile comes in. Whether walking or dozing off, I keep it by my side. I usually have at least 500 first lines, titles and word combinations stored in that lovely little Notes vault.

DS: Very much so. I’ve become extremely aware and appreciative of the broad range of poetic forms, structure, shape, meter, rhythm. When I first starting writing and performing my work seriously, which was only seven or eight years ago, I think I had a relatively restricted view of what was or could be a poem. I’m more liberated now as a poet. I let the words dictate their shape to me, the verse structure, the use of white space. I experiment more now, even going down the e e cummings path from time to time. And I work much harder on word economy, to say what needs be said with the fewest and most exact words possible. I’ve recently been exploring the creative construct of one word poems, and have a particular fascination with very short 40 – 60 word pieces. My next book might entirely comprise very short, poignant poems, an intense concentration of charged words, rather like a heavily reduced red wine broth. I love the line from poet Jack Spicer in his Second Letter to Garcia Lorca, “A really perfect poem has an infinitely small vocabulary.”

DS: I’m mostly in the mood to read pretty well anything. I read a great deal, as all writers should, and have anally charted everything I’ve read since the late ‘70s. It’s fascinating to look back and see what I was reading when. I endeavour to read about 70 books a year and have set a goal of reading 1,000 books during my 70th decade unto heaven….you see, I told you I was anal. I’m usually reading two or three books at a time. Right now I’m reading Jeanine Cummins’ fabulous novel, American Dirt, as well as Sayaka Murata’s Convenience Store Woman and David Kamp’s The United States Of Arugula. On the poetry front, I’ve just finished Margaret Atwood’s Dearly and have just started Brad Gooch’s Rumi’s Secret, The Life of the Sufi Poet of Love. I basically carry Coleman Barks’ The Essential Rumi with me and refer to it often. Leonard Cohen’s posthumous collection, The Flame, is also a very recent read. American poets Billy Collins and Mark Strand also rank highly on my “go to” list.

DS: My wife and I travel a lot, at least we did pre-COVID. And as a British émigré, ‘lo those many years ago, I must say that perhaps my favourite escape spot in the entire world has to be out there on the Yorkshire Wolds. I could sit all day on those green hills, lost in the tranquility of grazing sheep, the stone cottages dotting the valleys, wood smoke drifting from the chimney pots into that beautiful English sky...and if I can’t have that a nice Italian Ripasso with my beautiful wife, and perhaps my daughter and granddaughters, can serve as a rather exceptional form of escape. A quiet, reflective scotch or whiskey also works well, my favourite being, what else, Writers’ Tears.

A poem from sfumato

This is the window.

It is the only window in this room.

The window sees what it sees
with the steel eyes of a concentration camp.

When I look out,
I am there on the lawn,
the merest perception of a window,
trying to understand
what it sees in me
and why it has left me here.

David Stones is a award-winning poet, performer, ex-CEO and business leader, guitar enthusiast, and self-confessed bon vivant. With poems hailed for their resolute imagery, beauty of language and ready accessibility, David is a celebrated performer of his work. He transformed his debut collection of poetry, Infinite Sequels (Friesen Press, 2013), into a one-man show of the same name (“a brilliant and beautiful piece of theatre” – London Free Press, 2018). The winner of multiple poetry contests and judge’s choice awards, David’s poetry spews forth from presses both in Canada and internationally, including most recently Synaeresis (Harmonia Press), Big Pond Rumours, Beret Day Books, Authors’ Press (India), Hidden Book Press, Skywing Press and Her Royal Majesty (Paris, France). David lives peripatetically between Toronto and Stratford, Ontario.

During the month of April, you can buy  sfumato and any one of our other featured Poetry Express books for 15% off + free shipping in Canada with promo code NPMexpress. Or find them at your local independent bookstore with our Shop Local option.