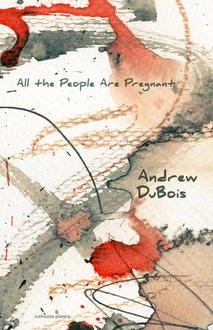 In his debut poetry collection  All the People Are Pregnant (Goose Lane Editions) writer Andrew DuBois collects what he considers are poems worth preserving, written and occasionally published since he was 20.  Leading readers through a fractured past and present, he defamiliarizes, critiques, and satirizes a wide range of conversational forms in the style of Wallace Stevens and Michael Palmer.

Below, Andrew talks about how the book came together, surprising tulips, and what he means by "poetry is aspirational." Read on for the Q&A and a poem from All the People Are Pregnant.

Andrew DuBois: The book brings together what my 46-year-old self considers to be the poems worth preserving that I’ve written (and on occasion published) since I was 20. There are a couple from the last 16 years and the rest of them I wrote before that. My feeling was that they should marinate for a long time and if they held up on repeated readings over a significant span of years, then it made sense to make a book. (Lots of things got cast aside as insufficient along the way.) They’re all weirdly related, coming as they do from the same source, myself. (It’s like the poetry wrote my life.) So the poems existed—but it wouldn’t be a book without Katie Fewster-Yan, who edited the collection and illuminated how it had a rough sequence that I couldn’t quite follow alone. 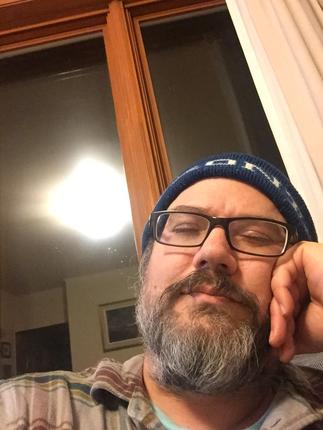 [Image description: A photo of the author that is cut off below his shoulders. His eyes are closed and he is resting his head on his hand that is partially in the frame. He is wearing a beige plaid collared shirt, a blue-and-white toque, and black-rimmed rectangular glasses, and has a salt-and-pepper beard. In the background is a wood-framed window.]

AD: This question really makes me think, because actually most of my sources for inspiration are fairly likely, to be honest—either people who have captured my interest and affection (muses) or thoughts or events that are nagging at me (ideas and politics) or things that happened to me personally (stories) or things I maybe wish would have happened (fantasies). Most people probably wouldn’t find this specific source so unlikely, but I had never paid enough attention to flowers (except for orchids), so the fact that tulips inspired me in writing some of these poems was, at any rate, a surprise to me—it being nice to surprise oneself sometimes.

AD: It really hasn’t. I’m skeptical of poets but still believe in poetry. Poetry is aspirational. It means reaching for something worth attaining. I’ve felt that way for as long as I can even remember knowing what poetry was.

AD: For a while I couldn’t read much of anything. Then I was averaging roughly a short book a month through the pandemic: Elizabeth Hardwick’s Sleepless Nights, Diana Athill’s Letters to a Friend; some of Cicero’s letters—a good time to brush up your Stoics—which I naturally abandoned out of lassitude; Code of the Woosters (insouciance and assessment, dumb luck and problem solving, cheerfulness and unflappability), Huck Finn (only when they’re on the raft alone together), True Grit (to hear Mattie Ross talk, a person of character and moral fortitude, and to see Rooster’s imperfect but loyal resilience displayed); Giovanni’s Room, The Beautiful Room Is Empty; Anita Loos and Helen Hayes’s Twice Over Lightly (a great staycation book) and Walter Mosely’s The Man in My Basement.

Then I didn’t read anything again for a while, after which I started going back, creeping “under a whirlwind,” to some idea, some long lost idea...I read David Ferry’s translation of Gilgamesh—Good God. Seamus Heaney’s Beowulf—Wow Woe. I might read Longfellow’s translation of the Divine Comedy next. (It’s dawning on me that the Divine’s idea of what constitutes comedy is fairly ironic.) I also read the Barack Obama and Alex Trebek memoirs—may Alex rest in peace—as well as one by Teddy Atlas, the boxing trainer and analyst; and for a review I read the Collected Poems of Harry Mathews. The poet who seems deepest and most full of solace and truth to me personally over the last several years is Elizabeth Bishop. There’s a thing impossible to name, not just in the poetry but in everything she writes, that speaks some language inside of me.

AD: I’d like to be in Delft; or listening to records with my old friend Jeff in his shed; or cradled safely in a lover’s body, all entwined, enjoying each other’s company, glistening in the heat and light of the morning’s opulent sun, talking after, mixed with little kisses; or just to get out of these places it’s hard to admit to myself that I need to escape from in order to live the life I’d prefer to live.

A poem from All the People Are Pregnant

North and South but in German

This is a cursed poem, Tiamat split
into rivers
the sun a pregnant letter.
This is now a callus or wax
the sun a broken chalice.

Broken pleasure yester-
day
a new language for thieves
who can’t laugh in Russian translation
tee-he-he through an overcoat
false full of mortar.

Take brick from a stable kiln
to orbit
strain on the door
a flag unfurled, a silver tongue
made slow
the region—the cold face—no war
is predetermined.
We’ll speak.
The eyes of God ship the words up
North, it’s south but in German.

Andrew DuBois is the author of three previous books, including Ashbery’s Forms of Attention and Start to Figure: Fugitive Essays, Selected Reviews, a collection that includes reviews of over 200 contemporary poets. He also co-edited The Anthology of Rap, named a Top Ten Book of the year by New York Magazine and The Village Voice. He is a member of the University of Toronto’s English department and divides his time between Toronto and Carbonear, Newfoundland.

During the month of April, you can buy  All the People Are Pregnant and any one of our other featured Poetry Express books for 15% off + free shipping in Canada with promo code NPMexpress. Or find them at your local independent bookstore with our Shop Local option. 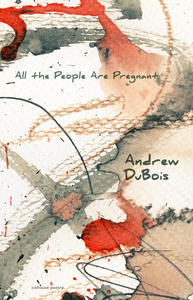