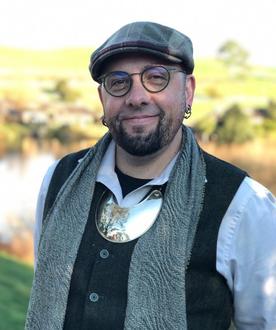 In June, Indigenous-led publisher Kegedonce Press celebrated the 15th anniversary of Daniel Heath Justice's The Way of Thorn and Thunder trilogy, an Indigenous fantasy series likened to the scale of Le Guin and Tolkien that follows an epic conflict between humans and the other-worldly Kyn. Today it takes its place amid a welcome groundswell of Indigenous speculative fiction, the first fantasy trilogy by an Indigenous author in North America. Below, we talk with Daniel about Indigenous spec fiction, how Tolkien, Dungeons & Dragons, and his family history inspire his work, as well as colonialism and the changing cultural landscape since the initial release of The Way of Thorn and Thunder series.

All Lit Up: What draws you as a reader and a writer to fantasy-genre fiction?

Daniel Heath Justice: I’ve loved fantasy since I was a child, and it’s always been a place of sanctuary, retreat, and possibility in a world that’s often quite cold and cruel. I don’t think of it as a genre of escape as much as a mode of realignment, a way to imagine otherwise and maybe just find ways of living otherwise, too. I like my fantasy to be political, engaged with real concerns, addressing matters that are of consequence to those of us who stand at various points outside the status quo, but also imaginative, wondrous, and fun—it can be all these things at the same time, and the best fantasy helps make our everyday world more strange and magical, too.

ALU: Can you tell us a little about your creation of the world of The Way of Thorn and Thunder and its people, the Kyn? What were your inspirations?

DHJ: Honestly, my first and most significant fantasy influence was Tolkien, and there’s much of his love of language and the wild world in there; I’m also a lifelong Dungeons & Dragons player, and that, too, informs a lot of the world-building of the work. But it’s also deeply engaged with my family’s history and the political history of my Nation. I don’t really enjoy Eurocentric fantasy much anymore; there’s a pretty dominant template of unreflective white supremacy in so much of the high fantasy genre, and that’s not something I wanted to contribute to. I was much more interested in the ways that those deemed “other” in so much fantasy might be centred, and to tell a story of dispossession from their perspective. The Kyn are just one of many Nations of people struggling to maintain their relations and their sovereignty against an increasingly aggressive political and military force, and I wanted to see how they grappled with that situation in a way that invoked Cherokee history but didn’t simply replicate it. 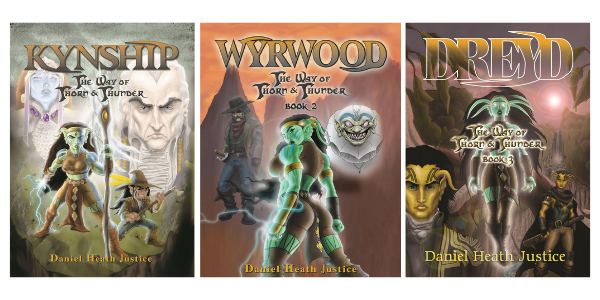 ALU: Colonialism is a significant theme in the trilogy, a topic that is the subject of many recent works, both fiction and non-fiction. What, if anything, has changed in the literary or cultural landscape concerning the public discourse on colonialism since you wrote Kynship, Wyrwood and Dreyd?

DHJ: I think there’s a much bigger conversation about colonialism and its impacts, and on many different societal levels. Of course, the more public the conversation the more public the backlash, but that, too, is instructive, as you can see how old justifications for colonialism and its violence are very much at play again. My students are certainly more familiar with the broad contours of colonialism than they were, and there does seem to be less shock and refusal than there was, even if there’s a growing reactionary movement in Canadian society at large to try to justify it.

ALU: The field of Indigenous speculative fiction has exploded since The Way of Thorn and Thunder came out. Why do you think this is? What excites you about the work being done now?

DHJ: There has always been some measure of speculative exploration in Indigenous literature, but for a long time the emphasis was to some degree on realism, as so much that non-Indigenous people thought they knew about us was stereotypical, misunderstood, or just plain wrong. I think the work that writers in a more realist vein did to push back against stereotypes and colonialist lies helped make more space for more fantastical explorations—and sometimes these were the very same writers! That said, Indigenous readers are also readers of genre fiction, and as we’ve found more of an audience for our range of literary works, new voices have emerged, new questions have too, and an increasing insistence on our own imaginative horizons and futurist visions. There’s also been growth in scholarship that’s supported, enhanced, and expanded the conversation in ways that are really encouraging. It’s really heartening to see so many incredible Indigenous visionaries finding voice and audiences through speculative approaches.

ALU: Are you still writing speculative fiction? If so, are there any plans to return to the world of Thorn and Thunder?

DHJ: I am! I’ve published a few short stories over the last few years, and I have another novel (possibly trilogy) underway set in an entirely different world, one I’ve described as an Indigenous steampunk mash-up of True Grit, The Island of Dr. Moreau, and Wind in the Willows, but I do plan to return to the lands of the Kyn and the other Folk after that!

ALU: Why do you prefer the term “wonderworks” to “fantasy”?

DHJ: “Fantasy” is fine as a genre category, but it carries a lot of baggage, especially around the idea of what’s real and what’s not—with the “what’s not” often seen as false. And in the tradition of Western materialist rationalism, certain things are considered false that aren’t in Indigenous epistemologies—things like animals having voice and personality, spiritual entities being part of our everyday realities, plants being peoples, etc. “Wonderworks,” for me, makes space for a range of spiritual and material understandings; it doesn’t pathologize more relational ways of understanding the world; it places humility and curiosity at the centre of our imaginative work, not narrow certainty. “Fantasy” does important work, but “wonderworks” feels more engaged with the taproots of our own imaginations, not those of colonial society.

Daniel Heath Justice (Cherokee Nation) is Canada Research Chair in Indigenous Literature and Expressive Culture and Chair of the First Nations Studies Program at the University of British Columbia, unceded Musqueam territory. He is most known for his book Why Indigenous Literatures Matter (2018, Wilfrid Laurier Press). His previous publications include a study of Cherokee literature, Our Fire Survives the Storm: A Cherokee Literary History, along with the Way of Thorn and Thunder series from Kegedonce Press (omnibus edition from the University of New Mexico Press). His most recent publications are Badger, part of the Animal Series from Reaktion Books (UK), and the co-edited Oxford Handbook of Indigenous American Literature.

Thanks to Daniel for taking the time to answer our questions, and to Patricia at Kegedonce Press for connecting us. The Way of Thorn and Thunder series is available from Kegedonce as a special discounted bundle for a limited time.

September 16, 2021 by Peter Counter
Under the Cover: Seizing absurdity in Devolution