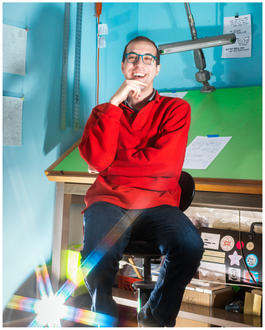 Today's feature graphic novelist is award-winning cartoonist Sami Alwani whose newest  The Pleasure of the Text (Conundrum Press) is a collection of 20-slice-of-life comic stories that are equal parts comedy and tragedy. Alwani weaves together themes of queer intergenerational polyamory, racial capitalism, and esoteric mystical experiences into stories that question society and individual identity. The Pleasure of the Text collects all of Alwani's previous work to date (Vice, Now) with plenty of never-before-seen material.

Below, we chat with the cartoonist about his work, how graphic novels are "the most auteurist art forms," and what he's learned working in the medium.

All Lit Up: Can you tell us a little about your recent book?

Sami Alwani: The Pleasure of the Text collects all of my published comics work to date as well about one third new material produced especially for the book. The timeline encompasses the past seven years during which the comics have appeared in Vice Comics, Best American Comics, the Fantagraphic’s anthology NOW and elsewhere. In terms of subject matter the scope of the book is very wide. All the stories are filtered through the lens of one of several rotating self-portrait characters but they deal with subjects as disparate as gay intergenerational polyamory, existential ennui, white supremacy/neocolonialsm, “inside baseball” celebrity alt-comics gossip and the foibles of our current neoliberal/neofascist late capitalist hellscape. The work is experimental in style and media (gouache, oil paint, collage, digital and more) but for the most part maintains a focus on narrative storytelling with a magic realism and slice of life bent, sometimes veering towards poetry. The book is dark, but also very funny. I love to laugh!! 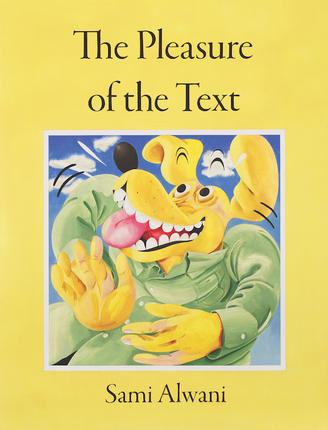 Click here to find  The Pleasure of the Text at the Conundrum Press booth at TCAF. 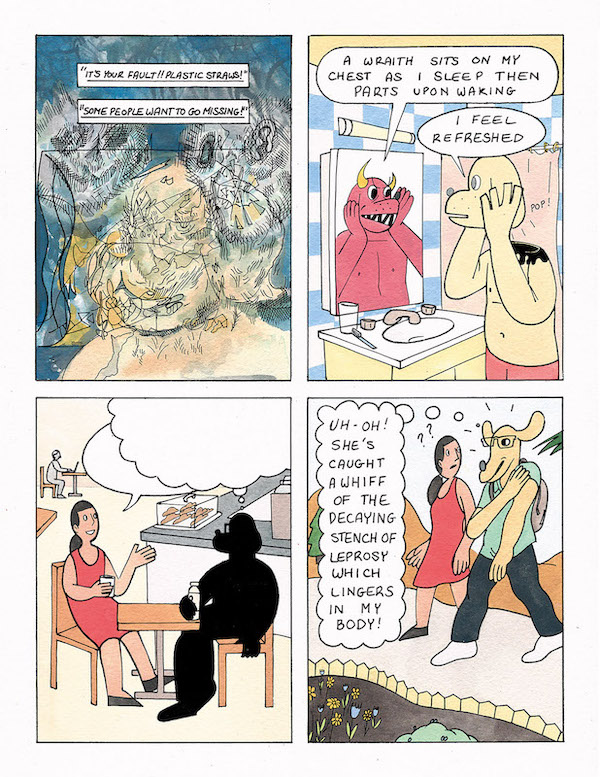 ALU: What do you love most about the graphic novel as a form?

SA: I am a perfectionist and when I am crafting a story I like to structure every aspect of the narrative down to the most minute detail. I love that in comics I have complete control over the reader’s experience and can work independently to produce my exact vision of what I want the narrative to be. In my opinion, it is the one of the most auteurist art forms, one person can achieve a fully immersive world using something as simple as a pen and paper. Since alt-comics are such an underground medium it also means that everyone working in them is really doing so out of their own passion and love for the work. I think this invites a lot of interesting and unique perspectives that you don’t see in other media that require huge budgets and substantial infrastructure to scaffold their projects.

ALU: How do you approach a project? What is your process?

SA: I think approaching process in the same way every time makes the work kind of stagnant so I like to vary my approach slightly with each story, having said that, I almost always start with the writing. I like to work from my own experiences and then transform them so that the narrative reads more like how the experience it’s based on felt to me rather than how it actually happened. Usually an idea for a story pops into my head and I start accruing little scenes or aphorisms that I write down as they come to me, then I sit down and flesh out all the bits in between until I have a script. After that it can go in any direction, lately I have been improvising a lot with the drawing and layout, looking for happy accidents. With a story like "The Dead Father" or "The Misfortunes of Virtue" though I will spend days (months?) planning out panel structure and composition for every drawing, sometimes through several drafts, before ever touching pencil to paper.

ALU: Who are some of your influences? What inspires your work?

SA: I like to sample from bits and pieces of a lot of different media. I read widely and research books, movies and fine art constantly and incorporate a lot of what inspires me into my work.

To name a few major influences in no particular order: Donald Barthelme, Franz Kafka, Roberto Bolano, David Hockney, Simon Hanselmann, James Baldwin, Francisco Goya, Margot Ferrick, Banana Yoshimoto, Ryunosuke Akutagawa and of course Roland Barthes from whom I stole the title of this book. I do look at a lot of other contemporary cartoonists and illustrators but as much as possible I try not to let them influence my own comics (at least visibly) as I worry that the scene can start to look very incestuous and self-referential. One thing that’s very important to me is trying to make work that doesn’t already exist or that hasn’t been done before.

ALU: Did you learn anything unexpected when working on your recent book?

SA: I hope that I can be surprised by everything I work on! I think I write to try and answer questions I have about things, each story usually focuses on something in the world that interests me or bothers me and through working on a comic I can peel back the layers and deconstruct it until I arrive at some deeper level of understanding. I guess I could say that at the end of the day I’ve learned that the world is really a very extremely complicated place and that people are really funny!

Sami Alwani is a cartoonist and illustrator based in Toronto. His comics have appeared in Best American Comics, on Vice and he received a Doug Wright Award in 2018 for his story The Dead Father. His work was exhibited in the Canadian alternative comics survey exhibition “This is Serious” at the Hamilton Art Gallery in 2019. His first collection of stories, The Pleasure of the Text, will be published with Conundrum Press in May 2021.

Click here to find The Pleasure of the Text at the Conundrum Press booth at TCAF.