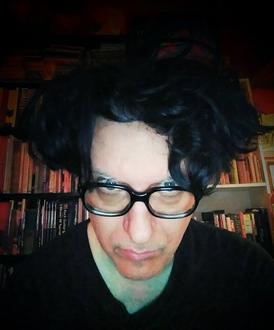 In his recently published collection of autobiographical work  Represented Immobilized (Conundrum Press), Montreal punk legend and alternative cartoonist Rick Trembles brings together schoolyard scuffles, seedy matinees, and run-ins with inept riot cops for an unflinching look at his early years in Montreal. The book collects 40 years of autobio work from Trembles, including strips that were originally published in the influential Montreal zine Fish Piss.

Below, Trembles tells us how a midnight move from a crumbling apartment was the impetus for Represented Immobilized and what motivates his work.

All Lit Up: Can you tell us a little about your recent book?

Rick Trembles: In the mid-nineties, I had recently become roommates with someone starting up a DIY zine and they needed content so I began the series Represented Immobilized for them. It was after a midnight move away from my crumbling apartment down the street and I had to store most of my belongings in my parents' basement where I grew up while looking for a new place. While gradually bringing all my childhood belongings bit by bit back into my new digs, it started triggering memories from my past. Worried about them fading from memory as time wore on, I took the opportunity to document them in Represented Immobilized. 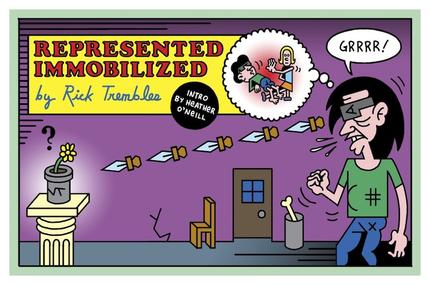 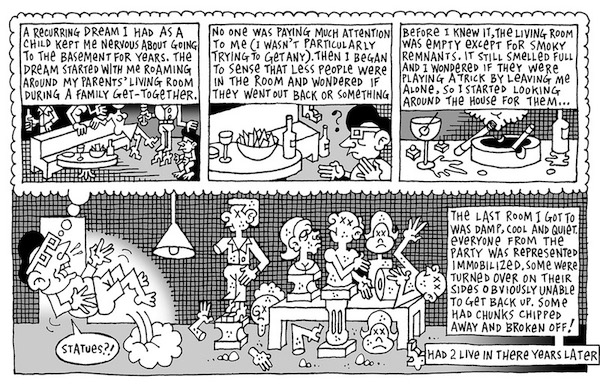 Click here to find Represented Immobilized at the Conundrum Press booth at TCAF.

ALU: What do you love most about the graphic novel as a form?

RT: The fact that they're comic books in disguise.

ALU: How do you approach a project? What is your process?

RT: I'm either motivated by a need to impart some research, get something off my chest, a hankering for a good laugh, or a craving for clearing my head with stream of consciousness non sequiturs. If it's gonna be text-heavy, I write it all out in script form first via word processor, then transcribe the text into blank panels. I draw my line-art around the remaining spaces and then fill it in with colour.

ALU: Who are some of your influences? What inspires your work?

ALU: Did you learn anything unexpected when working on your recent book?

RT: I was astounded by the kind words renowned Canadian author Heather O'Neill wrote about me in her sizable introduction to my book. I had no idea that I had made such an impact on her so early in her career.

Click here to find Represented Immobilized  at the Conundrum Press booth at TCAF.

January 14, 2021 by Ioana Georgescu
Where in Canada: Who Belongs in Quebec?