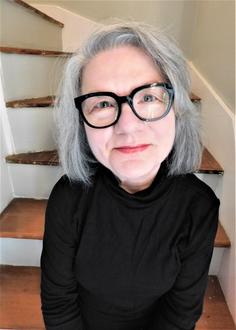 My mother bought me the first book of my own, the first book I wrote my name in. It cost 39¢ and she bought it from the corner drugstore in our northeast working-class Edmonton neighbourhood. It stated boldly on the bottom right-hand corner of the cover that, “Your child’s life is enriched by beautiful poetry.” It was titled Favorite Poems to Read Aloud. Gyo Fujikawa designed the cover which featured a serenely smiling blond-haired girl in red Mary Janes, wearing a blue dress and white pinafore, and gazing into a large book resting in her lap. The corner of more books peeked from behind the toe of her shoe. The girl lounged against a big pillow, in front of a casement window with a criss-cross of black lines on the panes. Outside the window, a little bird rested on a tree branch as dots of snow fell from the sky.

At Christmastime, my mother criss-crossed black electrical tape onto the living room window and sprayed fake snow in the diamond shapes. At the time, that was the one tenuous connection I could make between myself and this idyllic scene on the cover of the book my mother bought just for me. I certainly didn’t look like or dress like the girl on the cover, there were no trees outside my bedroom window, and there were no ponds in my neighbourhood. I was outside this scene. I still have this book and what I realize now, all these years later, is my connection with this image on the cover of a girl reading was that of a personal declaration, something I didn’t even know enough to think possible or impossible. I looked at the cover of this book and I was not reflected in it. Someday, I wanted someone to read a book I had written. I wanted to write.

My parents came from a rural prairie background and moved to Edmonton when I was small. My father was a carpenter. I don’t ever remember seeing him read a book. My mother liked to read; she read to me a lot when I was young from the one large book of fairy tales and poems we had in the house.

When I started elementary school, I devoured the standard school readers, but I felt, as I did when I looked at the cover of the first book I wrote my name in, my family and I weren’t reflected in the stories. My parents didn’t talk like or look like the parents in the readers. The fathers in the readers wore a shirt and tie, they had hobbies (my own father worked all that he could in the summer; he didn’t have time for hobbies and his hands were rough and calloused). Mothers in the readers wore dresses during the day and wore a hat and gloves when they went out (I remember my mother and grandmother gutting and plucking chickens in the garage...my mother putting the lawn in while eight months pregnant with my brother). Where were the stories of families like mine? Where were the stories about girls like me?

In junior high I wrote a story about the beauty to be found in a bowl of chicken noodle soup. I wrote another story about visiting a relative at a seniors’ home with my mother. A teacher wrote a comment in the margin of that story. “A talent for creative writing.” I had no idea what this might mean for me. The comment went unacknowledged by my parents. How could a girl like me earn a living by creative writing? What did that mean? There wasn’t anyone in my family or anyone that my parents knew who wrote. Writing and art existed outside the orbit of my family’s life. Neither of my parents had finished high school (although, my mother did get her high school diploma in her forties. Another story). Creative writing? That made no sense. I can’t know what my parents thought I might do with my life, but I’m sure there was no thought that I would write. Looking back on that teacher’s comment pencilled in the margin of that hand-written story is like remembering seeing a signpost, a street sign on a road. Here was a woman who saw something, she had read my writing and she had seen it and seen me.

"The female literary canon’s trajectory was a path that seemed to start, stop, and begin again as if nothing had come before."

My first university English course was a survey course that spanned from Old English writing to modern writing in English. All those years. All that writing. All those writers. There was not one woman writer on the syllabus. Not. One. This was the male-centric canon that was supposed to provide the reference for me on my writing journey. Where was the space for women writers? Where was the space for a girl like me?

A few years later, I took another university course: Women’s Literary Tradition. The very title—Women’s Literary Tradition—seemed to confirm the idea of the "otherness" of women’s writing. I was introduced to Julian of Norwich, Margery Kempe, Aphra Behn, Christine de Pizan...why hadn’t I encountered these writers in my first English survey course? It wasn’t even as if the female canon ran parallel to the male-centric canon. The female literary canon’s trajectory was a path that seemed to start, stop, and begin again as if nothing had come before. Who was I supposed to look to for inspiration if I was not even aware of who came before me? Why was there a separate canon for women’s writing and women writers? I wasn’t a prioress, a mystic, one of the first women to earn a living by writing, or a writer at an Italian court, but at least I now knew there was a lineage of women writers I could look to as I created a path for my own writing career.

My poetry and my fiction have drawn upon my working-class roots and focused on women’s ability to persevere through adversity and poverty. Certainly, the women in my family were strong examples for me—they helped my family push through some tough times financially and personally.

My Santa Rosa Trilogy of novels (Broke City, North East, and Santa Rosa published by NeWest Press) chronicles the story of a working-class family, living in a long-disappeared working-class neighbourhood, and speaking a working-class vernacular. What is most important to me, however, is this family’s story is told through the eyes of a female child-narrator. This feminist perspective, this female gaze is critical to Christine’s dreams of becoming a writer, an artist. She believes her dreams will give her access to a different world and take her beyond the harsh reality of her home, her neighbourhood, and her city. Christine is a feminist without even being able to articulate it. Her voice and the voices of all future feminist characters in Canadian literature who tell their stories are essential to continue to make space for feminist writing in a traditional male-centric canon.

Now, all these years later, when I look at the girl on the cover of my first book my mother bought for me, I realize that the very thought that I might become a writer was in itself a feminist act. Writers like me can tell the stories of girls like me, girls from working-class families who hear the particular sound of working-class voices—and writers like me can make them heard.

Wendy McGrath is a Métis writer who has published four novels and two books of poetry. McGrath works in multiple genres—fiction, poetry, creative non-fiction, and spoken word. Her most recent book, Broke City, is the final novel in her prairie-gothic Santa Rosa Trilogy. This acclaimed trilogy chronicles the struggles of a working-class family and is told through the eyes of a child narrator. McGrath is also a printmaker and creator of artist books.