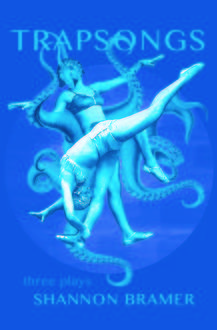 When we asked playwright and poet Shannon Bramer to record a scene from her collection of plays  Trapsongs (Book*hug Press)—three dark comedies that navigate the realm of the surreal and absurd—she delivered with a fun, behind-the-scenes recording of a scene from The Hungriest Woman in the World featuring outtakes and scene partner (and husband) Dave Derry. Scroll on to watch the video and read more about Trapsongs.

The title of my new collection of three plays, TRAPSONGS, comes from a short (still unfinished!) play I wrote about a family living with a mouse infestation. The daughter keeps finding the dead mice and putting them, traps and all, into her dollhouse. She’s fascinated by, rather than frightened of, the “deadness” of the mice. The mother wants to protect her from having morbid “grown-up” thoughts; the father is impatient with his wife’s squeamishness and sensitivity. Both are trying to figure out the most humane way of dealing with the infestation. At a cocktail party they decide they don’t want to be like other people and resort to Warfarin, the “popular poison.” They want to be like themselves.

It’s an oddball little piece that made me realize that, maybe like a lot of writers, I often return to the same material/ideas/worries in my work. I am always thinking about boundaries and hiding places and the edges of our most private and protected spaces. Also traps: the traps we invent; traps that isolate, ensnare, hold us still, stop us from going somewhere we shouldn’t or maybe should. Once you are in a trap you must figure out how to get out or else succumb. But you have to know you are in a trap in order to make that choice. Often we don’t even know we’ve stumbled into one. Traps tempt us with their danger and their mystery. Sometimes a trap leads into a world that wants to be explored, reckoned with, sorted. A person can be trapped inside a way of being or seeing themselves. Two people might be trapped together. You might find your trap cozy. You might even love it and never want to leave. Finally, the trap might be all you’ve ever known.

Near the end of one of the plays in this collection, The Hungriest Woman in the World, a new character (LD) provokes protagonist Robert by warning him not to touch the octopus costume. He tells him: “It’s hot. It’s a trap.” A few minutes later LD then commands Robert to pick it up. The octopus costume is intimately connected to Robert’s estranged wife, Aimee. It is “hers.” Robert doesn’t yet know why he needs to make contact with Aimee’s octopus. For him touching it means touching her in a way he hasn’t been prepared or able to do. It’s a trap because he doesn’t know whether or not he wants to be caught. He doesn’t know what being caught might cause.

In The Collectors the audience is invited directly into the trap: the dingy and dishevelled apartment of Hannah Parson and the three collection agents who happily and viciously inhabit it with her. Hannah perceives her debt collectors as contaminating intruders, interlopers in her once hopeful creative and emotional space. Since they’ve leaked into her life she’s been unable to make art—they distract her too much. She can’t pay her rent and will not leave her apartment because she’s afraid of being locked out (of her mind) forever. Despite her isolation, near the end of the play she wonders if it isn’t safer inside, anyway:

Sometimes I think my debts keep me safe. I do. No one wants to come near me, like this, in this situation. I’m alone but everything around me is so soft. Everything I touch is soft—it’s like being dead maybe, or being in heaven. I’ve got a lot of space here. Time to think. Anyway, I have a feeling this will all be over soon. I just wish they’d listen a little better, see things from my point of view. My friends and family shouldn’t have to help me with debts that I’ve accumulated all on my own, should they? I hate when they pester me—not everyone in the world has friends and family, for goodness sake. And the way they talk about bank drafts and certified cheques?! That confuses me too. Because what I owe can’t be paid back like that.

Monarita began as a conversation between two sides of one person. Once I started, it didn’t take long for these two sides to become discrete, real and somehow painfully separate characters. But they were still trapped, like two cells on the same slide under a microscope. I had been thinking a lot about boundaries (as usual) and remembered Plato’s Symposium—his idea of a circular being split in half and destined to roam around forever looking for the part that will always be missing:

When that circular form was split in two, each half went around looking around for its other half. They put their arms round one another, and embraced each other, in their desire to grow together again. They started dying of hunger, and also from lethargy, because they refused to do anything separately. And whenever one half died, and the other was left, the survivor began to look for another, and twined itself about it...in this way they kept dying.

They kept dying! I loved the image of two beings trying to grow together and time and time again withering in the embrace. It is a conundrum I return to in all three plays: when is an embrace a trap? When is it song? When is it both? Monarita unfolds on the playful surface of how women sometimes see and talk to each other. It examines autonomy alongside attachment, desire alongside despair. The tender anxiety between the two characters, Mona and Rita, deepens throughout the play. Things get wild and witchy before they ultimately break apart.

Having these plays read, performed and produced over years has been both exhilarating and humbling. I am so grateful to the actors, directors, dramaturges and producers who helped me bring these stories and characters to life. I am especially indebted to the Women’s Work Festival in St. John’s, Newfoundland, for accepting my plays into their festival so they could be explored and refined in all the ways necessary for them to be realized both on stage and inside the little theatre in my head. Trapsongs is three plays, and like an octopus that has three hearts, it wants to wrap its arms around you.

Thanks so much to Shannon Bramer and Dave Derry for sharing a scene from The Hungriest Woman in the World with us, and to Hazel Millar at Book*hug Press for making the connection.  Trapsongs is available now on All Lit Up.

In Review: The Week of May 6th