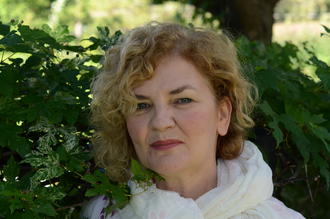 A Cemetery for Bees: An Interview with Alina Dumitrescu

In her autobiographical novel A Cemetery for Bees, Montreal-based author Alina Dumitrescu traces the journey of a woman from her youth in Socialist Eastern Europe to her transplanted life in Montreal, Canada. She is a precocious, thoughtful child, whose early life in Romania is marked by the scarcities of the time and the political games needed to survive, but she is not unhappy. Placed around her family''s house are hives--the bees discourage the secret police from visiting too often—and they provide both a childish diversion and an overarching metaphor for departure and home.

Below, we share an interview between Dumitrescu and her publisher Linda Leith Publishing about growing up in Communist Romania, how writing in a learned language remains "in some way outside of me"; early influences and inter-art, and more.

Linda Leith Publishing: A Cemetery for Bees describes a childhood growing up in the Romania of Nicolae Ceausescu. Would you have become a writer if you had remained there?

Alina Dumitrescu: I grew up in Romania—my Romania. At the time Ceausescu, the dictator, was in power. He and the Communist Party had been in power for most of my life before emigration. If I had stayed in Romania, I think my predilections for expression would have led me to an artistic career, but only after the Revolution in 1989. But I’ve always been a writer. I’ve always lived in and with books; I have always survived thanks to the written word, letters, language. 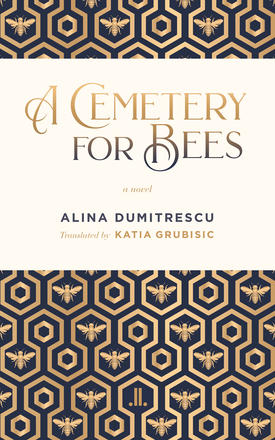 Available here on All Lit Up

LLP: “Go to Paris.” Those are the opening words in A Cemetery for Bees. Can you talk about your two main themes of language and leaving?

AD: Going to Paris was a dream. I wanted to be born again as a real Parisian. Going to Paris also meant travelling beyond the borders, getting to the West—the West as a cultural scene, as fertile ground for another language, in this case French. But I landed in Montreal, instead.

My exile was about language rather than land. The need to deal with the cleaving, with being torn in two brought about the need to write in this new language which suddenly was mine. My country of origin pained me, and pains me still. Like those who pride themselves on restoring a historical truth, I wanted to restore my poetic truth.

LLP: Why did you make the literary decision to write A Cemetery for Bees as a series of short chapters?

AD: My natural writing style is mostly poetic, a bit cinematic. I like setting the scene for readers and then letting them loose to resonate with it, to add their own images and atmosphere.

LLP: You write in your second language and have just been translated into your third. How does this feel?

AD: Writing in a learned language gives my style a kind of bookish tone. I don’t tussle with the language, I contemplate it and respect it. The French language remains in some way outside of me.

Being translated into English was a huge surprise. To be honest, the pitch created by the English translation makes me a bit dizzy. I understand enough English to grasp the rhythm, the nuances, the intertextuality. The notion that I might be translated into a language I don’t speak or understand at all is daunting.

When I read in English, my comprehension goes straight to the Romanian. For French, never: French is explained by French.

LLP: How was the translation process?

AD: I was very intimidated by the prospect of being translated into a language that I know much less than French. Before we started working on it, I tried a few paragraphs with Google Translate just to see what it would be like. I also asked my sons, who speak English.

My translator, Katia Grubisic, called on me a few times to clarify details, and I felt honoured to be consulted and included in the whole process. I’m so happy with the result. All we need now are readers! We’ve already had some really encouraging, enthusiastic responses.

LLP: Have any of your books been published in Romanian?

AD: The only thing I published in Romanian were some poems in a regional cultural magazine, Ateneu, when I was sixteen. Then, in 2017, I participated in the Tristan Tzara International Festival in my hometown of Moinesti. For the event I’d translated a few pages of A Cemetery of Bees into Romanian.

LLP: Who are your literary influences and heroes?

AD: The Bible was a huge early influence—the richness of the language, the metaphors, and even the maps at the end to situate the stories. And the beauty of the book itself, the physical and spiritual place it has always occupied in our lives. In my parents’ house, we never placed another book on top of the Bible. We always washed our hands and put on decent clothes before reading. It was with the Bible, that thin, silky paper, that my father taught me to turn pages in a conscious, respectful, and even elegant way.

Beyond that, it’s almost impossible to list all my literary and artistic influences—all the Russian, French, Germans, Romanian, American, Argentinian, and Chilean writers, and all the others.

My sources of inspiration are multiple, they vary from one artistic medium to another. Just as I play with intertextuality, I practise inter-art, which creates a powerful and evocative synergy.

LLP: Are there any upcoming projects to look out for in the near future ?

AD: I am currently working on two projects. The first, La tuque au sucre, a novel about roots and wandering, tells the stories of three generations of strong women. The second, Cabinet de merveilles, is a collection of twelve short stories, with illustrations by the visual artist Edwin Stanculescu, who also illustrated A Cemetery for Bees.

Alina Dumitrescu was born in Moinești in what was then the Socialist Republic of Romania, and emigrated to Montréal in 1988, shortly before the fall of the Ceaușescu regime. Her schooling was not recognized in her adoptive country, and she undertook CEGEP and university studies in Québec. She started writing again in the late 1990s, in French, publishing poetry and short fiction. Le cimetière des abeilles, her first novel, was published by Triptyque in 2016, and was a finalist at the Festival du premier roman de Chambéry and won the Blue Metropolis/Conseil des arts de Montréal Diversity Prize.