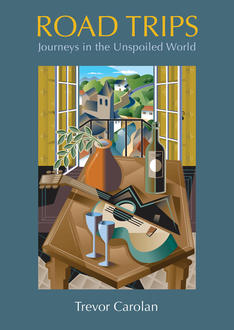 After a music reviewing gig at the age of seventeen led him to travel writing, author Trevor Carolan has been regaling readers about his extensive travels around the world. He's since visited more than fifty countries and written several books of non-fiction, including three poetry collections. We had the pleasure of electronically chatting with Trevor about his newest book  Road Trips: Journeys in the Unspoiled World (Mother Tongue Publishing), a collection of road tales for both armchair and seasoned travellers; favourite travel destinations; and what makes a good travel story.

All Lit Up: Can you tell us a little bit about your new book Road Trips: Journeys in the Unspoiled World?

Trevor Carolan: After a journey to Europe and North Africa two years ago, I wrote an article about Morocco. Alan Twigg, B.C.’s all-around Man of Letters, recommended I write a book of travel stories. At the encouragement of a journalism student from Barcelona, I was then also writing a memoir piece about my younger days amongst a group of artists in Madrid during the time of General Franco—people in Spain still don’t talk much about that repressive era. When Mona Fertig at Mother Tongue asked if I’d ever considered publishing a collection of my travel reports, the light-bulb clicked and I knew that was exactly what I should be working on. I’d just finished these two in the bag, and in recent years I’d published others from India, Hawaii, and Bali, so I got organized and committed myself to a writing schedule.  I’ve always been a traveller and my wife Kwangshik is a natural road warrior too, so I had a considerable series of travel journals to draw inspiration from. Mona and her Mother Tongue imprint have an abiding interest in the visual arts, hence no surprise that she challenged me to bring my old arts and music writing background into the manuscript and expand on this with reportage on the food, wine, literatures and customs of the people one encounters as an independent traveller. That provided direction to build upon the groundwork of the book’s detailed descriptions of the environments and peoples you encounter in the stories. I’m probably best known for a certain spiritual dimension in my writing, especially regarding Asia and the Pacific, and this is in there as well regarding experiences at a number of sacred pilgrimage destinations. There are 19 stories from 13 countries, and “Dusk along the Mekong,” a searching account from Laos was written only four months ago, just before the virus descended.

ALU: We read that you began your travel-writing career in high school as a backpacking reporter for a newspaper. How has your travel writing evolved during your career?

TC: I actually began as a music writer reviewing rock concerts and that led me to San Francisco’s Haight-Ashbury countercultural scene that gets mentioned in Road Trips. The possibilities of writing from the road became real for me when I picked up a copy of Jack Kerouac’s Lonesome Traveler at a flea-market while backpacking in Yorkshire. Once I began freelancing for magazines, writing columns, interviews and so on, I began reporting from Seattle, Victoria, then Toronto and New York. That gave me street-cred and I picked up assignments that were travel-focused—Whistler, San Diego, Hawaii, Jamaica. I discovered the brilliant Ryszard Kapuscinski’s writing in Granta magazine in 1985, and was sold on narrative non-fiction as a serious genre I could handle. A long journey with my wife throughout Asia that same year led to several articles on Southeast Asia, and one in particular proved uncannily accurate and well-timed regarding a tense multicultural situation there. There was still only a small network of western writers and scholars commenting on Asia and I developed a reputation for understanding something about that part of the world. With some help from Alberto Manguel, an anthology of short stories from throughout the Pacific Rim that I edited called The Colours of Heaven was received very well and I became more visible. This led to more anthologies and invitations to interview or profile Buddhist leaders in different locations. As a married man with a family, however, I needed to achieve some financial stability and my writing career was punctuated with various administrative, teaching, or organizational opportunities that arose. But I questioned where it was all leading. Confucius says, "The wise seeker looks for patterns." I was led to a PhD program downunder at Bond University in Australia, and this proved an amazing opportunity to consolidate and make a pattern of everything I’d been working on up to that point. Australia was the ideal place from which to ponder the far-off world. It also obliges a great deal of journeying to get back and forth and in between. So I’ve had a very winding path as a traveller and I’ve written all along the way, not always as a traditional “travel writer”; I’ve done three books of poetry and each has a long sequence of travel poems; while journeying I’ve also written lectures, essays, reviews, chapters for a book or for my doctoral dissertation, and memoirs or interviews with important subjects. I think it’s fair to say that it has all been imbued with what in Asia they call “the red dust of the world”—the road. In the past ten years, I’ve globe-trekked—often with Kwangshik, my best navigator—to conferences, book fairs, on lecture tours, or simply to fascinating places that haven’t always been available before. Everywhere we go I still tote my reporter’s notebook that I learned to carry as a young journalist.

ALU: What makes a good travel story in your opinion?

TC: Good travel stories make you want to be part of them, to keep on following the writer’s adventures. Serious travel writing is a kind of research journalism that above all depends on careful observation. What makes the material sing for the reader is how it works with language and colour, mood, description, and research to bring us some depth psychology regarding the narrator’s journey or search out on the road. Ultimately, serious travel stories record the kind of engaging, authentic experience that will entertain and enlighten others, make them turn the page and follow where this journey leads. Check out Ryszard Kapuscinski, Martha Gellhorn, Edith Iglauer, and Emily Carr’s west coast travel stories. As a last item, I’d also advise not overlooking the element of sheer surprise. You can travel far to see things, but as travel writer Chuck Thompson says, “Just when you think you’ve seen the best the world has to offer, there’ll always be Canada.”

ALU: As someone who has travelled so extensively it’s probably hard to pin down a favourite destination, but is there a place that was particularly meaningful to you? What is the next spot you’re itching to visit?

TC: Favourites are usually tied to time and context. Can I offer a few? San Francisco has always been a touchstone for me. It’s the most beautiful city in North America, and for a cluster of geographic, social, and ethical reasons it has been a nexus point for progressive human developments in our lifetime. Eternal Paris is like that too, and aesthetically it’s still the most beautiful city in the world, despite the changing human dynamics. Ireland is my ancestral family territory. It’s deep, full of mystic unexplainables. Heart-stopping natural beauty, and the craic—the banter among people, the music, the tragedy, the simple joys. We’ve a druid friend there who takes us hiking through ancient stone monoliths that were old when the Pyramids were being built. Van Morrison can tell you about it. India contains entire worlds within worlds. Backcountry Hawaii remains extraordinary and the music is transcendently soothing. Itching to visit? My wife and I are due for a long ramble up north to the Yukon—grizzlies, caribou, lake trout the size of Moby Dick. And the small, historic country of Georgia in the Caucasus has been calling. You know how it goes—you meet someone from there and she shares her spinach hummus and bread at a picnic. “Yum! Maybe we should get over and have a good hike about.”

ALU: What advice would you give to any budding travel writers?

TC: Study! Travel light! Read in advance about where you’re headed. Get some history, acquaint yourself with the basic geography, with a few courtesy phrases in the local language. Carry a guidebook. Research your accommodation options. With the internet you can familiarize yourself with options to get from A to B and roughly what it will cost. Get vaccinated and pack a compact, sensible medical kit. All this will save you headaches and high blood pressure. Remember that on the road you’re an ambassador for Canada; you have a responsibility to be decent to local people; trust Oscar Wilde’s maxim—When in Rome, do as the Romanians do! The important thing is intuitive: Write It Down. A lot of good material gets lost in yakking about it. You can’t beat the immediacy of writing in the moment. Allen Ginsberg called it cultivating “Aesthetic Mindfulness.” Write down what you see when you see it, what you hear when you hear it. Make your notes and emails to friends work for you. These on-the-spot observations are your ammunition when you return home and start writing up your Official Report after a journey. Road Trips is filled with precisely this sort of information.

ALU: Where’s the first place you’re going after the pandemic?

TC: Alas, I’ve just had an eight-country European reading/lecture tour cancelled due to C-virus. I’d still like to knock a little around the Balkans again—Croatia, Bosnia, Albania, another look at Greece. The myths and legends are still so evident in these places. And we like to support the Cuban people: great adventures to be had there—Hasta la Victoria Siempre! Laos is a Buddhist gem that’s really worth a look. As the Buddha says, the Way is Endless! But first let’s make sure the way is safe, everybody. 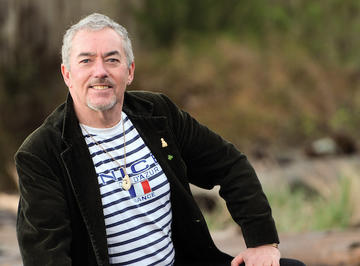 Trevor Carolan began writing for newspapers at 17 and is a widely-travelled literary journalist, poet and critic. He has visited more than 50 countries and his books include New World Dharma; In Formless Circumstance, Road Poems; The Literary Storefront; Return to Stillness: Twenty Years with a Tai Chi Master; and Giving Up Poetry: With Allen Ginsberg at Hollyhock. He served as an elected municipal councilor in North Vancouver following campaigns on behalf of B.C. Indigenous land claims and watershed conservation issues, and is Professor Emeritus with the School of Land Use and Environmental Change at University of the Fraser Valley near Vancouver. His new travel book is Road Trips: Journeys in the Unspoiled World (Mother Tongue). More at www.trevorcarolan.com

October 21, 2020 by Leyla Top
5 Quarantine-Approved Books for When You Miss Travelling