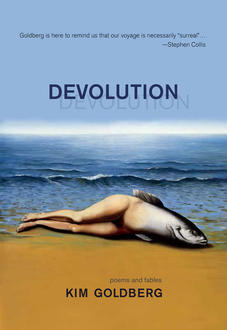 Author Kim Goldberg takes us behind the cover of her surrealist, satirical collection  Devolution (Caitlin Press): a personal act of extinction rebellion written over ten years, Devolution evolved from the playful mindset Kim held to cope with a personal cancer battle and the daily destruction of our ecosystems. Below, she tells us more about what went into writing her collection, early influences, Chinese martial art, the surrealist cover art, and more.

I worked on the poems and fables in Devolution for ten years. For the last four of those years, I was engaged in the fight of my life against two different cancers. (Both cancers are currently in remission, I am happy to report.) It was as though the collapse of ecosystems reported daily in headlines was mirrored in my own collapsing body via some perverse pas de deux.

But my mind, being what it is, was only able to translate disaster of this magnitude into weirdness and even playfulness. The more the world burned and the more dilapidated my own body became, the kookier and more ridiculous my poems grew. In the end, this proved to be my healing path—seizing absurdity from the jaws of annihilation. 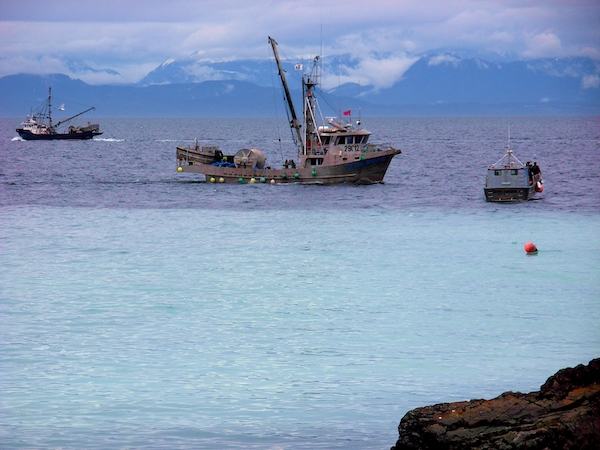 Herring Spawn in Nanaimo, when the sea turns white with milt (sperm)

This, for me, is the power and magic of surrealism, satire, fabulism. They allow one to enter and explore territory that might otherwise be searingly inhospitable. Favourite authors of my youth were Julio Cortázar, Jorge Luis Borges, Italo Calvino, Philip K. Dick, Ursula Le Guin, Marge Piercy, Boris and Arkady Strugatsky, Stanislaw Lem, Franz Kafka, Thomas Pynchon.

I did not set out to write a collection of surreal poems about the end of the world. Poetry rarely benefits from such a pre-determined approach. Most of the poems and fables in Devolution arose during my daily wanderings through streets, alleys, forests and seashores of Nanaimo, where I live. It was only after the fact that I realized Surrealism and ecotastrophe were the overarching themes allowing me to pull together a unified manuscript. (I take a broad view of ecology, which includes human and societal elements alongside the “natural”, for it is all interlaced.)

Every day on my way to the seawall, I walk through an underpass beneath a downtown bridge. The cavernous space, defined by enormous concrete pilings tagged with graffiti, is at once sacred and profane, reeking of urine and providing sanctuary for people who sleep there nightly. Hallowed like a cathedral. Or like a library, giving rise to “Special Collection”:

And we know this is a library by the mastodon columns bracketing our under
standing, their slow forage, the greying text of stony hide

by the flow of ideas in and out, tidal washing our soiled brain, our shared
pathways wired tight with twisted tines of aborted shopping carts and
clingfasts of green slime 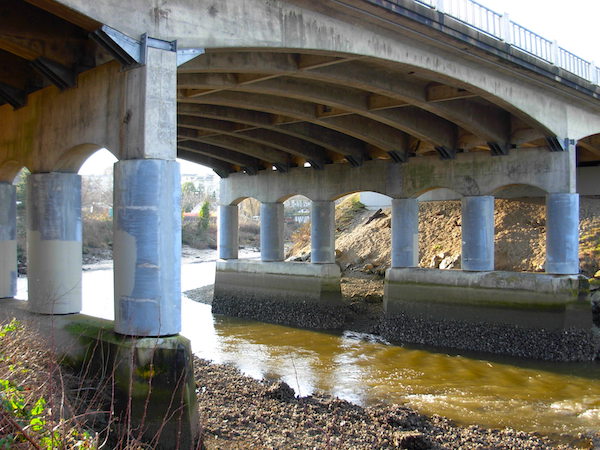 For reasons both personal and political, I find it important to reject literalism and free the imagination. At the heart of Surrealism is the notion that some deeper truth can manifest by abandoning the constructs of Realism, by rejecting—even destroying—the current way of seeing. The photo “The Eclipse” by Belgian Surrealist René Magritte embodies this concept. It depicts a group of men starring at the eclipsed sun, embracing the potential for blindness in order to see, sacrificing mundane vision in order to unleash creative vision. 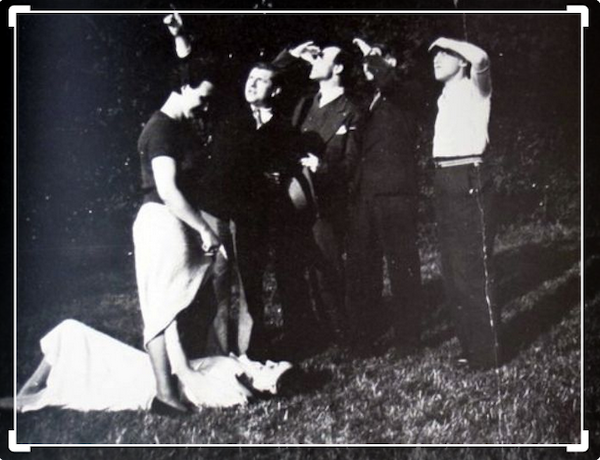 A huge influence in my life has been my mother Shirley Goldberg—a Reed College graduate and war resister who brought us to Canada, where she taught World Literature and Film Studies at Vancouver Island University. I grew up in a house filled with books from every culture. And I travelled with her to many countries for film festivals and other adventures. It turns out that fantasy, fabulism, magical realism, mythic creatures and folkloric exploits are deeply embedded in the literatures and belief systems of most cultures, leaving the English-speaking world to cleave to Realism.

Another contributing influence has been my study of the obscure Chinese martial art of Liuhebafa since 1997. The entire language of this art is steeped in Taoist metaphysics. Names of objects and actions, once decoded, form a secret recipe for internal alchemy and immortality. The wild horse is really untamed emotion. Lying tiger is the stilled mind. Closing the door is subduing desire. Parting clouds is removing impurities from one’s life. The winding river is in the belly. The watercart is the microcosmic orbit of our bodily energies. Nothing is what it first appears.

Prior to my study of Liuhebafa, I had been a freelance journalist, reporting on environmental and social justice issues. My immersion in Taoist metaphysics silenced me for a number of years. I could not compose sentences. My brain felt like it was undergoing some profound restructuring. When the words returned, they came as poems.

From “Field Notes from Tonal Outposts”:

We will swing iron weights from silk cords tied
to our scrotum. We will up the load daily.

She was touched by the contagion of his exquisitely sculpted
mind.

We will beat our arms and legs with a sock stuffed with
rocks and sewn shut, which you will make.

She stepped out of her newspaper skin, watched the language
fall from her body in brittle pieces, petalling the ground. 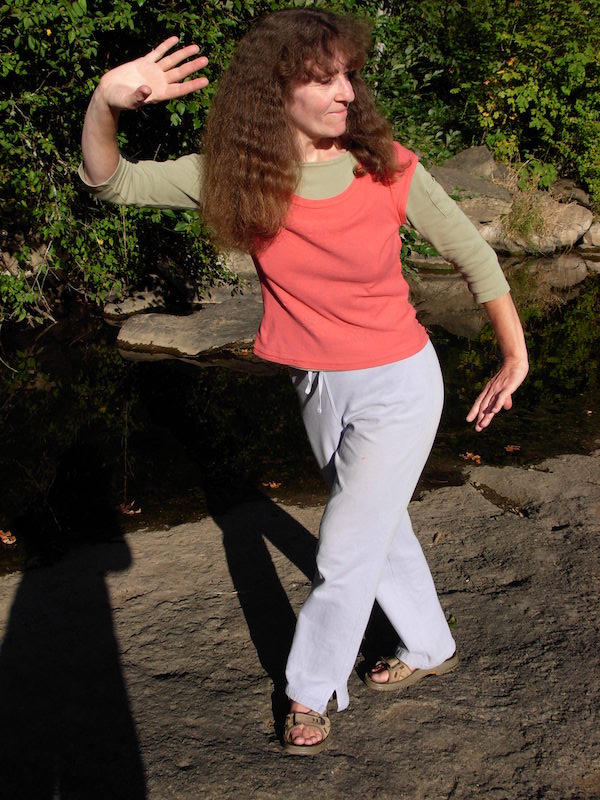 Kim performing "Rhinoceros Gazes at Moon," one of 66 movements from Liuhebafa

When it came time to search for a cover for Devolution, Monica at Caitlin Press and I began scouring the internet for suitable surrealistic art—ideally with an environmental theme. René Magritte’s “The Collective Invention” (1934) seemed like a perfect fit. And fortunately for us, Magritte’s substantial body of work had just entered public domain one year earlier, in 2018.

From “Shortly before the end”:

Shortly before the end, their minds turned sleek and black and were last seen
bobbing and diving among small, open fishboats in the harbour. The golden light
scattered diamonds atop the sea whenever a lean mind broke the surface. Each
mind had a tight band around its neck and a string on one leg.

I look forward to future imaginings from my mind and yours. 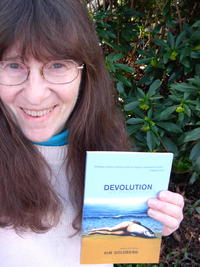 Kim Goldberg is the author of eight books of poetry and nonfiction. Her surreal and absurdist poems and fables have appeared in magazines and anthologies in North America and abroad. Kim holds a degree in biology from the University of Oregon and is an avid bird-watcher and field naturalist. Before turning to poetry, she was a freelance journalist covering environmental issues in publications such as Canadian Geographic, Nature Canada, This Magazine, Georgia Straight, BBC Wildlife, and numerous other magazines in Canada and abroad. Originally from Oregon, Kim and her family came to Canada in the 1970s as Vietnam War resisters. She lives on unceded Snuneymuxw territory (Nanaimo, BC), where she is known for creating poem galleries in vacant storefronts and staging guerrilla poetry happenings in weedy waysides.

Thanks so much to Kim for sharing the story behind Devolution with us. Thanks too to Monica at Caitlin Press for making it happen. Devolution is available for sale on All Lit Up.

March 19, 2020
A Mature and Intelligent Period of Grieving: On Death and Humour in Writing