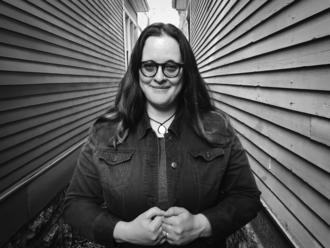 For National Tree Day, we chatted with Ariel Gordon about her latest collection  TreeTalk (At Bay Press), a project born out of a two-day poetry writing spree at downtown Winnipeg's Tallest Poppy that assembles 234 poems—111 by Gordon, 107 written by passersby, and 16 from other sources—into a long/found poem that asks: what does it mean to live in the urban forest?

All Lit Up: Congratulations on your new poetry collection, TreeTalk! Can you tell us a little bit about the book and how it came to be? What was the process like of assembling different voices into a long/found poem?

Ariel Gordon: So I was interested in participating in an artist’s residency at The Tallest Poppy, a Jewish diner/hangout in Winnipeg’s West Broadway neighbourhood. The residency had previously featured mostly visual/conceptual artists, so I felt called to do something more performative than sitting in a booth for a weekend and just, well, writing. At the time, I was a year away from finishing my collection of essays, Treed, and wanted to return to poetry but stay in the trees as it were…

The year before, I’d embarked on the Poetry Barter Project, where I traded poems for food grown, harvested, or foraged within city limits. In addition to the foodstuff, participants were asked to contribute five words that would be used in the poem, in an attempt to include them in the process. But the occasional poems that emerged weren’t satisfying, somehow.

So I hit upon the idea of having people write poems with me, on writing poems publicly. And, because the residency had to be in and around The Tallest Poppy and I was obsessed with trees, I hit on the idea of sitting under the boulevard elm to one end of the TP’s patio and asking everyone—people eating at The Tallest Poppy and passersby—to take a moment and write to the tree too.

And so, over two long days in July 2017, we wrote 234 short poems, which we hung from the tree with paper and string. I wrote 111 and sourced another 16 quotes from field guides, while passersby contributed 107.

And the poems moved in the breeze something like leaves do.

When it came time to edit the manuscript, the next spring, I was at St. Peter’s Abbey in Saskatchewan as part of the Sage Hill Writing Experience. I pulled out the wind-macramed mass of paper and string and transcribed the leaves one by one into a Word document. Next, I printed it out, cut it up, and taped all the bits and pieces up on the wall. I arranged and rearranged them, arriving at a rough chronological order.

It was like wallpapering a room in the dark. But it was deeply satisfying to turn the lights on and see the final product. 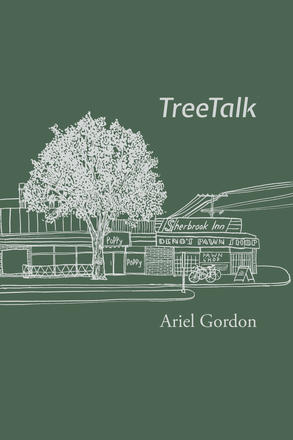 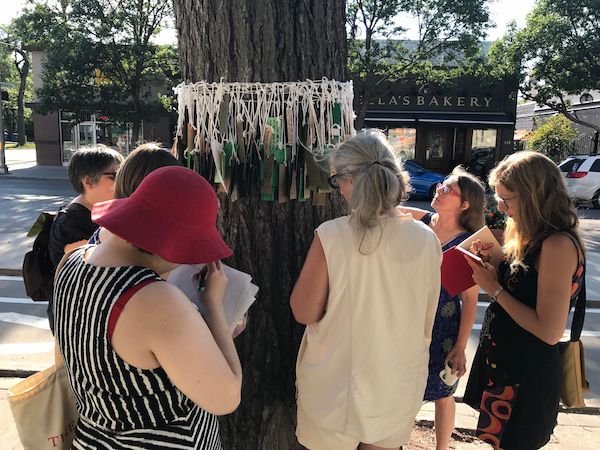 Passersby writing to the tree

ALU: Last year you published an essay collection, Treed: Walking in Canada’s Urban Forest with Wolsak and Wynn that explores your relationship with nature. How does your creative non-fiction inform your poetry and vice versa?

AG:  The main difference between Treed and TreeTalk, isn’t genre but approach. They’re both about living alongside trees in the city, but Treed attempts to look at urban forests on a system level while TreeTalk is about slowing down and paying attention to—talking to—one street tree.

In terms of craft, writing poetry and CNF feel very similar to me. To complete Treed, I had to figure out how to write and edit long-form prose and I had to figure out plot, but once I did that—and it took me four years, so it wasn’t nothing—I felt very comfortable.

ALU: Let’s talk about the beautiful pen-and-ink-illustrations in the book. What was the process like of working with Natalie Baird to incorporate her art throughout the collection?

AG: Natalie is my sister in addition to being a visual artist. That weekend in 2017 when I did the residency, she just happened to be having breakfast at The Tallest Poppy with her friends.

Matt Joudrey from At Bay Press is always game to add art to his literature—see Lucy Hache’s collaboration with Michael Joyal on the Overhead Series and Shirley Camia’s Children Shouldn’t Use Knives and Other Tales that includes Cindy Mochizuki’s illustrations—so I suggested Natalie as a possible artist when we got to that phase of production. 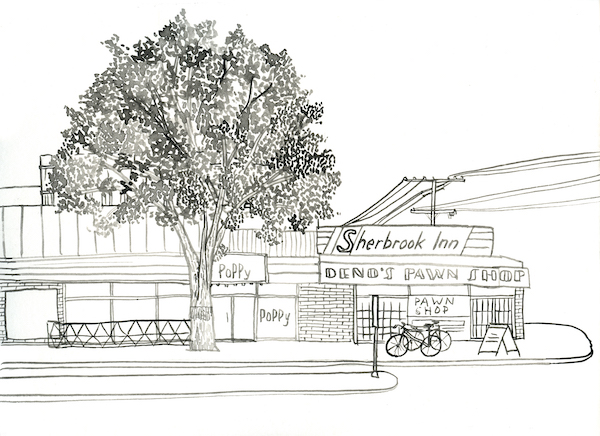 Though Natalie had been there during part of the residency—and hung two drawings from the tree that morning—she made the artworks for the book a year or so later. Luckily, my partner Mike Deal, a professional photographer, took lots of photos and she was able to use them as a reference.

Natalie and I have continued collaborating. After that weekend at The Tallest Poppy, we started meeting up every three weeks, sitting together at a table with a couple of notebooks. She’d draw in hers, I’d write in mine, and then we’d switch. I’d write something to go with her drawings and she’d draw something next to my poems. This continued until the pandemic hit, which forced us to formalize and sterilize the process, so instead of working in person with notebooks, we moved two boxes of paper between our households from March to August.

We called the it Pandemic Papers: Phase One and At Bay Press just published reproductions of those pages as a chapbook in August. 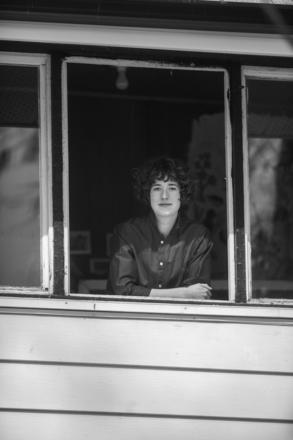 ALU: While working on TreeTalk, what wisdom did you glean from Winnipeg’s Tallest Poppy?

AG: I gleaned chicken-and-waffles and eggs-and-toast. So many cups of hot/sweet tea. I gleaned the happy/sleepy eyes of people brunching and the curiosity on people’s faces when they spotted me and the poem-girdled tree. I gleaned a deep appreciation for the occasional poem. And I learned again, what a great community Winnipeg is, supporting its artists, feeding them. 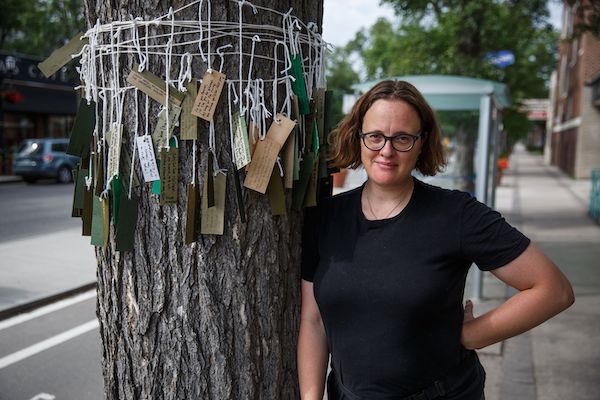 Ariel with poems that would become TreeTalk 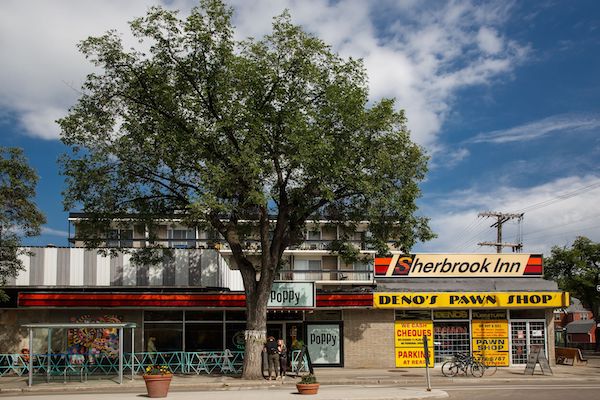 ALU: If you could spend a day in nature right now, where would you go?

AG: I’m pretty happy to spend time in nature anywhere. Though I like provincial parks and other semi-wild spaces, I only get out to them a few times a year, so I’ve become a specialist of urban nature, which is to say all the flora and fauna in the city.

Where I live in Winnipeg, as soon as I step out of my front door I’m in the shade of a 108 year old elm tree, planted when my little house was built. It’s enormous and beautiful. If you look a little further, there are mushrooms and pineapple weed on the boulevard and bees on my neighbour’s flowers. This spring, we had a racoon with six babies burrow into the roof over my bedroom. I disliked the constant rustling and chirping on top of the damage they were likely doing, but I loved having staring contests with them when we arrived home at twilight and they were prowling around, their day just beginning. I loved how they’d knock on the ceiling, how curious and intelligent they are. But I also love the merlins that swoop over our neighbourhood, shrieking. It’s like my partner and I, nattering at each other, except in raptor form. I love hearing the chickadees call from the trees around me, especially after having fed some from my hand last year. I love how they are so light and quick, so fearless.

But If I have two or three hours, I head for Assiniboine Forest, a never-developed patch of aspen/oak parkland within Winnipeg city limits. I forget in between visits how painfully beautiful and ordinary it is, like childbirth.

Ariel Gordon is a Winnipeg-based writer. She is the author of two collections of urban-nature poetry, both of which won the Lansdowne Prize for Poetry. She is the ringleader of Writes of Spring, a National Poetry Month project with the Winnipeg International Writers Festival that appears in the Winnipeg Free Press. Gordon co edited, with Tanis MacDonald and Rosanna Deerchild, the anthology GUSH: menstrual manifestos for our times (Frontenac House, 2018). 2019 saw the publication of Treed: Walking in Canada’s Urban Forests (Wolsak & Wynn, 2019), a collection of essays that combines science writing and the personal essay. It received an honourable mention for the 2020 Alanna Bondar Memorial Book Prize for Environmental Humanities and Creative Writing and was shortlisted for the Carol Shields Winnipeg Book Award at the Manitoba Book Awards. Her most recent book is TreeTalk (At Bay Press, fall 2020), a public poetry project where Ariel hangs poems in trees and asks passersby to add their thoughts, ideas, and secrets. It is the first book in the TreeTalk series.

Treetalk is available for preorder on All Lit Up.

September 26, 2020
In House: At Bay Press and the Manitoba publishing scene