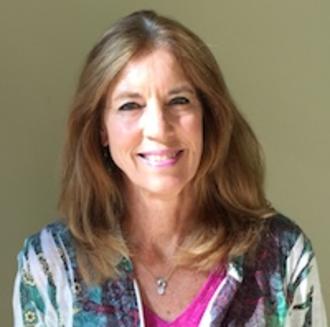 Terry Milos' autobiographical story  North of Familiar (Caitlin Press) gives a first-hand account of her departure from city life and her struggle to build a life and family in the Yukon. We chat with Terry in this Read the Provinces interview to hear more about how living off the grid has made her more courageous and allowed her to tap into the experiences of early pioneers.

Get North of Familiar for 15% off until January 31!

All Lit Up: Tell us about your book North of Familiar and how it came to be. 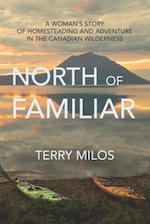 Terry Milos: I moved to northern Canada in 1974 and lived there for 19 years. I raised my family and learned to hunt, fish and live off the land with my then-husband Stan. For years after moving from the north, I told stories about my adventures. After hearing these stories, friends encouraged me to write them down, so I started putting pen to paper.  It was easy to write the most memorable stories. Then I wrote vignettes of other memories and experiences. Because I had 12 photo albums of my life in the north, putting the stories into their proper sequence and adding to them was not a problem. North of Familiar: A Woman’s Story of Homesteading and Adventure in the Canadian Wilderness (Caitlin Press) was the result. I now live in Sicamous, BC with my current husband and continue to travel to the Yukon and engage in adventures at every opportunity.

ALU: It’s been argued that physical geography shapes our identity, that there’s a connection between our physical place in the world and who we are. As a writer, in what ways does your natural environment inform your writing?

TM: The remoteness and isolation of my northern environment helped me to develop courage, independence and strength of character, which definitely has contributed to who I am. I was intrigued and curious, always seeking to find out more about nature and the history of an area. Living off the grid and working and living in remote communities gave me an opportunity to experience the lifestyle, struggles, and adventures of the early pioneers. When I write, I pull from these experiences and my memories of my life in the Canadian wilderness.

ALU: Who are some of your favourite authors based in the Yukon?

TM: I am not as familiar with authors based in the Yukon as I am with those that have written about the Yukon. I have read many books on the history of the territory and true life adventures of those that lived there, including the poems of Robert Service and stories of Jack London. Recently however, I read the book by Yukon author Ellen Davignon, “The Cinnamon Mine," and Lynn Berk’s “The Yukon Grieves for No One”, who spent many summers in the Yukon. I also love Whitehorse’s Michele Genest's cookbooks and the many photographic books that feature the beauty of the Yukon.

But Atlin, BC, where many of my stories take place, and is often considered an extension of the Yukon because of its close proximity and Yukon access, has produced many authors. They include Christine Frances Dickinson and Diane Solie Smith, Peter Steele, Doug Urquhart, Allison Mitcham, Kate Harris, and Christine Dickinson, Mike Morhun, Sue Morhun, Helen Stephen, Jamie Stephen who wrote a book together. I know all of these authors and have read their books.

FROM NORTH OF FAMILIAR

Shortly after leaving Tim and Eve’s, skiing on the lake ice became very difficult. There was a lot of overflow—water that flows from cracks and pressure points out over the ice. The water was quickly freezing on the bottom of our skis, hindering our progress. We had to stop frequently to scrape the ice off and start out again.

As we trekked down the middle of the lake, the shortest distance to the next point, we kept hearing loud booming sounds like a cannon going off under the lake, and the ice would shake. We had heard of this phenomenon and had been told that the freezing and contracting of the ice caused the loud noise, but even knowing what it was and that we were safe, we were still unnerved. The sounds were eerie and stopped us in our tracks each time. Even though we knew the lake was frozen solid, we stopped periodically to chop into it to check the thickness of the ice.

Eventually we headed for the western shore, where we took off our skis and fashioned a toboggan of sorts by cutting willow branches growing nearby and clipping them onto our ski bindings to keep all four skis together. This allowed us to put our backpacks on our little sled and begin walking. We traded our ski boots in for the much-warmer snow packs (insulated winter boots) we carried with us. This was how we trudged through the snow on the lake to the first tendril of land beneath towering Mount Minto, which Stan and I had seen when we first saw Atlin Lake.

Once again, the light began to fade and dusk crept over us, bringing a freezing chill to the sky. We found a little clearing on the shore of the lake to set up camp under the magnificent mountain. We knew we had just passed the Yukon-BC border, so we figured we had travelled about fifteen kilometres. Gathering wood was the first and most important task before dark. There was an abundance of driftwood and dead wood that was ready to collect, thank goodness! We soon had a pile higher than we were tall. Feeling satisfied, we broke off branches from the nearby fir trees to make our beds. We had read that a bough bed was a marvelous source of insulation when sleeping out in the cold. We laid the boughs out a bit longer and wider than our sleeping bags and close to a metre high. We put our drop cloths down and laid our sleeping bags on the beds; we hadn’t yet figured out that a two-person sleeping bag was the best for keeping warm in conditions like these. The fire was blazing and we were able to cook a meagre dinner and drink some hot chocolate. It is an amazing and frustrating thing that happens when you are sitting in front of a fire (in somewhere around thirty below zero, or colder). You absolutely burn in the front and freeze in back. As soon as you move a little bit away from the fire so your eyebrows are not being singed, your behind is so cold that even with extra clothing on, you can’t stand the discomfort. When we couldn’t stand it anymore, we decided to climb into our sleeping bags. Every so often Stan would sneak out of his bag and throw another piece of wood on the fire, then we would doze a while, put more wood on and sleep some more, until finally all of the wood was gone. I knew then that it must be almost morning. I asked Stan what time it was. He looked at his watch, looked again and said, “You’re not going to believe it, but it’s only 8:00 pm.” Our early stop at dusk (about 3:30 pm) and the fact that wood burns much faster at colder temperatures would make this an exceptionally long night.

Terry Milos was born and raised in Florida and moved to California to attend university. On a hike one day she met an outdoor enthusiast from Alaska who became her husband. They married a year later and moved to northern Canada where they bought property on Little Atlin Lake in the Yukon Territory. For nineteen years, she raised a family and taught school in many remote Canadian communities. North of Familiar: A Woman’s Story of Homesteading and Adventure in the Canadian Wilderness is her first book. Milos now lives in Sicamous, BC but continues to travel to the Yukon and engage in adventures at every opportunity.

Purchase a copy of North of Familiar for 15% OFF until January 31, and stay tuned for more Read the Provinces featured authors all month long here on All Lit Up. Follow us on  Twitter, Facebook, and Instagram with the hashtag #ALUreadtheprovinces. 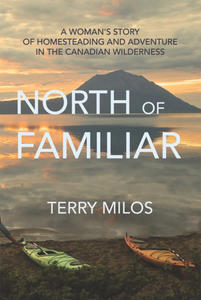