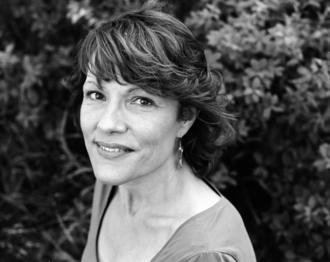 Leslie Vryenhoek's gritty, page-turning novel We All Will Be Received (Breakwater Books) grew from a stay at an odd roadside motel in Newfoundland’s Northern Peninsula and the idea of being off-grid. Leslie tells us more about how her novel came to be, displacement, and emotional landscapes.

See more details below
Tagged: we all will be received, leslie vryenhoek, breakwater books, alu read the provinces

Get We All Will Be Received for 15% OFF until January 31!

All Lit Up: Tell us about your book We All Will Be Received and how it came to be. 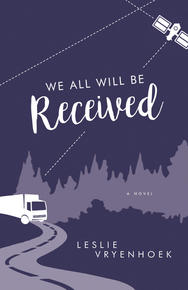 Leslie Vryenhoek: We All Will Be Received is the story of five people who are all looking to escape something and redefine themselves on their own terms. It grew out of a coalescence of ideas and impressions stewing in my head. First, I’m intrigued by how the internet has fundamentally changed the way we receive the world and each other. It’s complicated our attempts to define ourselves and made it impossible to escape the past. I wanted to explore what that means for people trying to make a fresh start, and for what we think about redemption.

That got tangled up with my conviction that how we perceive ourselves—as the hero of our own movie, in whatever way we define heroism—is not how others perceive us.

Also, I’ve got this weird fascination with the notion of disappearing, of peeling off one identity, whole cloth, and becoming someone new. Once, that was easy. Now it’s virtually impossible, at least in this part of the world. And though I get all the reasons why that’s better, I keenly mourn that loss of possibility.

So all those things were stewing, and they blended with my memories of a trip my husband and I took up Newfoundland’s Northern Peninsula, and an odd roadside motel we stayed in. There was no cell signal, no high-speed internet. The owners were trying hard, and the scenery was both bleak and spectacular, but there was just something off-kilter about the place and everyone in it.

I threw all that in the pot, and I started writing, one character at a time.

The novel opens in 1977—the year Star Wars debuted and Elvis (probably) died and the first personal computers rolled off the shelves. A young woman could still disappear, could flee peril and assume a new identity on the edge of the known universe—Newfoundland—and thirty-odd years later, run a motel on the Northern Peninsula and feel completely removed from her past. But of course the internet has changed everything, and in 2013, four desperate characters are coming her way, and her past is catching up. Oh, and there’s a big storm brewing.

In some ways, We All Will Be Received is much like a 1970s disaster movie. You meet all the characters, discover what’s driving them, and then watch what happens as they’re all trapped together. Which was tons of fun to write, because I just locked myself in a room with them and let them take it away.

LV: Because I live far from the soil I grew up on, and from the geography that is home, my physical place in the world is one of displacement. I experience wonder at the small details, but also a pervasive sense of alienation at the overall landscape. That tension around not belonging, not quite being rooted, seems to come through in all my characters.

What I do pay attention to in the natural world are the interconnected relationships between elements. In those, I hear an echo of human interconnections. And that’s what I gravitate toward—human nature and its emotional landscapes.

ALU: Who are some of your favourite Newfoundland-based authors?

LV: In St. John’s alone (to say nothing of the rest of the province), there’s a remarkably rich and diverse writing community. Some of Canada’s best—and my best-loved—novelists, poets, children’s authors and essayists live in the vicinity. That means every grocery expedition or long walk can result in a brilliant chance encounter; every night out can include an in-depth discussion about books, writing, and stories that resonate in this world. It means that when you read slowly and deliberately, as I do, you can’t hope to keep up with the great work coming out of Newfoundland and Labrador.

And it means any list of even some of my favourites would be far too long—and would capture only where my head is at this moment, so dependent on what I’ve most recently read (Michael Crummey’s The Innocents and Patrick Warner’s My Camino—both fabulous), while overlooking half a dozen other sublime favourites.

FROM WE ALL WILL BE RECEIVED

Disappearing would be as simple as sliding off the edge, as stretching one leg forward and following it over. Dropping from sight.

She’d been working up to it for a long time, for hours maybe, shifting her limbs and resettling her hips like a restless sleeper, stealing a little closer to the edge with each shift. Beneath her, the bedsprings had cried out with every small advance, but now she was on the verge, a foot already toeing the air. Just one more move, fast and certain, and she’d be gone.

She closed her eyes and let all the air seep from her lungs. Reached one arm forward. Counted it down.

Counted it down again.

And this time, she did it. She went over. Kicked her leg out, twisted and plunged to the floor.

She heard a soft one-two thud as her toes and palms touched down, then heard nothing but the rushing, loud and louder, that filled her ears. Panic, she thought, or adrenaline—were those the same things?—she didn’t know, but it calmed her to wonder it.

She stayed low and still, forehead to the floor. Pulled air through her nose to feed her hammering heart. The motel carpet smelled like wet boots and gas station toilets.

When the noise in her head subsided, she could hear he was still snoring and she began counting again, pacing the rhythm of his guttery breath—the sour whine as he inhaled, the pause, then the roaring exhale. She’d been marking that cycle for a long time, for all the eons it took her to take the plunge, to escape the trough in the mattress that wanted to keep her in his orbit.

Finally she lifted her head and opened her eyes. It was darker down on the floor, but a blade of light bisected the room near the foot of the bed. Slake had left an inch-wide gap in the curtain the last time he’d peeped out. He was loaded by then and careless, or else he wanted the harsh white motel sign for a nightlight.

That light dead-ended at the bunched mound of her t-shirt lying just inside the bathroom door. Her favourite t-shirt, powder blue with cap sleeves and a gentle V of a neckline, and she felt a small tug of regret for having to leave it behind. Near the foot of the bed, just beyond that slash of light, she could make out her khaki jacket, arms spread wide where she’d let it fall. She wanted to leave that too, to get away from it as fast as she could, but her wallet was in the pocket and her ID—a driver’s license, an old library card—would tie her to this. To all of it.

Leslie Vryenhoek has worked as a professional communicator in international development, advanced education, emergency response, and the arts. She travels extensively to gather stories about the lives of poor working women, which have been published worldwide. Her 2015 novel Ledger of the Open Hand was shortlisted for Newfoundland and Labrador’s prestigious Winterset Award and longlisted for the international Dublin Literary Award. She lives in St. John’s.

Purchase a copy of We All Will Be Received for 15% OFF until January 31, and stay tuned for more Read the Provinces featured authors all month long here on All Lit Up. Follow us on   Twitter,   Facebook, and   Instagram with the hashtag #ALUreadtheprovinces. 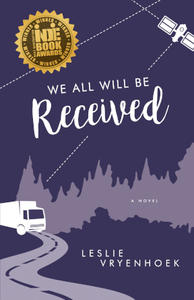