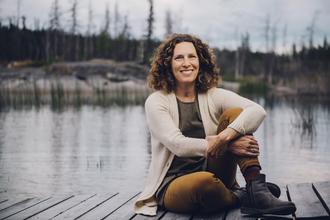 When Laurie Sarkadi moved to the wildnerness outside of Yellowknife, she found lessons, magic, and solace in the natural world. Her memoir Voice in the Wild (Caitlin Press) captures her physical and spiritual journey into the wild spaces of northern Canada beginning with the changing socio-political lives of Dene and Inuit in the late '80s. We chat with Laurie about our connection to nature, her memoir, and what black bears had to do with it. Read on for that and an excerpt from Voice in the Wild.

All Lit Up: Tell us about your book Voice in the Wild and how it came to be.

Laurie Sarkadi: When I moved to the wilderness about a half-hour’s drive outside of Yellowknife, Northwest Territories, I started having a lot of encounters with black bears. 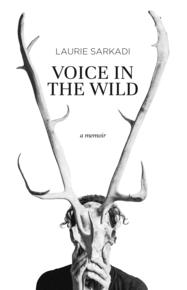 So many that I began noting everything that was happening in my life and how I felt each time I saw a bear. Those experiences added up in a meaningful way over several years and I wrote a piece which ended up in a Dropped Threads anthology. From that bear story came other stories connecting my relationship with creatures of the wild to some highly charged events in my life, including a lawsuit against me for publicly defending young girls who disclosed abuse (he lost!). The book reveals a lot of fascinating details about wolves, gorillas, ravens, insects⁠—their sex lives, mythology, physiology⁠—and connects them with how we live and learn. I wrote it to honour the healing powers of nature and I’m really, really grateful that so many readers have told me it helped them.

LS: I’m a nature writer, whether I’m defending the environment in my journalism or contemplating the way air “looks” at minus 40 in prose, the natural world is what inspires me and provides a foundation for my writing. It’s way more than scene. Because we as humans are part of nature, how we interact with water, trees, rock...how we see ourselves within nature is really key to our survival. I am very blessed to live amongst Dene, Metis and Inuit of the North, who have shared their deep knowledge about the importance of respect and reciprocity with nature. I try to convey that in my writing.

ALU: Who are some of your favourite authors based in the Northwest Territories?

LS: There are only 45,000 people in our giant territory, so we have a small pool of authors, but it’s growing in exciting ways. Right now I’m reading Antoine Mountain’s amazing new memoir, From Bear Rock Mountain: The Life and Times of a Dene Residential School Survivor. A young Dene writer to watch is Yellowknife’s Catherine Lafferty, whose debut memoir Northern Wildflower is courageous and raw and rebellious. She’s working on a novel. Richard Van Camp is our rockstar export, originally from Fort Smith, who has written 24 books! His short stories leave me wondering how anyone can have that much imagination.

FROM VOICE IN THE WILD

My son Max is a babe in arms when the caribou arrive unhurried and unannounced on our frozen lake. First in small groups, then swelling into hundreds, then thousands, their leggy, silver-brown bodies move like puffs of campfire smoke in the morning fog; their sharp-edged hooves dig into ice like teeth into a snow cone.

Perhaps it’s the caribou’s giving nature, perhaps they don’t know to distrust us, but as we stand awestruck amongst them, they soldier past with minimal wariness, unfazed as well by the steady crack of nearby gunfire.

Some Aboriginal people credit their very existence to the abundant charity of the herd.

It’s an unprecedented slaughter. Never before have the caribou made themselves so accessible to nearly 20,000 people in the territorial capital. Just a 30-minute drive outside of Yellowknife, Dene and non-Aboriginal hunters turn the snowy white landscape into a bloodied killing field. With wanton disregard, some hack off only choice parts of meat, leaving near-whole carcasses to waste and rot.

Before there were high-powered rifles and pickup trucks, when circumpolar peoples followed the herds by canoe and dog-team into the Barrenlands to survive, it was believed caribou offered their entire beings for food, shelter and clothing in return for respect and good behaviour. Clearly today, that agreement is being breached.

The Bathurst herd is an estimated 350,000 strong on Oct. 26, 1992. While I had witnessed the teeming migration of wildebeest and impala along the Serengeti plains of Africa, like most Canadians, I’d scarcely been aware North America still had spectacular, and indeed larger, movements of wild animals. We’d killed off the buffalo of the Great Plains, but the sheer cold and rigours of Arctic terrain had so far shielded the caribou from a similar plight.

The caribou’s annual migration from the tundra to their wintering grounds on the north shore of Great Slave Lake—earlier, and farther south and west than usual—alerts me to their journey and in some ways awakens me to mine. As a new mother, I’m shedding parts of my old self, pulsing with new blood and expanded awareness, like the budding antlers that crown the caribou each year, never growing to maturity in the same way twice.

Caribou are unique amongst deer in that females have antlers. Female antlers develop from June to September and are retained throughout winter to defend cratered feeding spots in the snow from older males, who drop their antlers after the fall rut. This provides a survival advantage for the female and her calf.

The herd largely disperses over the winter, but occasionally, some make stirring appearances, like the lone female that stands outside my house the day my friend Jeanette’s mother dies.

Read a longer excerpt from Voice in the Wild here.

Laurie Sarkadi is an award-winning writer, producer and editor. She moved to Yellowknife as the Edmonton Journal’s northern bureau chief, then spent sixteen years telling northerners’ stories through CBC radio and television. Her non-fiction has appeared in Canadian Geographic, The Globe and Mail,  thewalrus.ca and anthologies of women writers. She's currently completing her Masters in English at the University of Guelph, working with Lawrence Hill towards her first work of fiction. She lives off-grid in the Northwest Territories with her husband and has three sons.

Purchase a copy of Voice in the Wild for 15% OFF until January 31, and stay tuned for more Read the Provinces featured authors all month long here on All Lit Up. Follow us on    Twitter,   Facebook, and  Instagram with the hashtag #ALUreadtheprovinces. 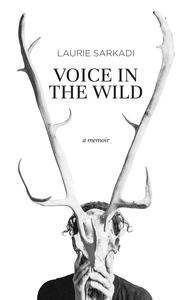 February 6, 2018 By Tan Light
Raccoon VS Bear: A Cage Match, In Conversation with Beatriz Hausner