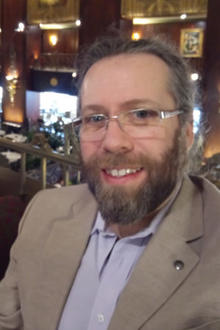 Devil in the Woods (Brick Books), the fourth collection from D.A. Lockhart, features letters and prayer poems that convey the experiences of an Anishnaabe man interacting with famous non-Indigenous Canadians from Don Cherry to Emily Carr. Through Indigenous poetics, this collection pushes back against the dominant view of Canadian political and pop-culture history and creates space for underrepresented voices. Below D.A. shares how his collection grew from an urge to have a conversation with Canada. Read on for our interview and a poem from Devil in the Woods. 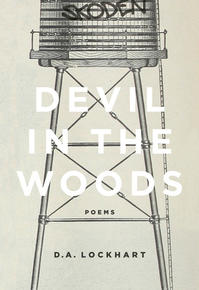 All Lit Up: Tell us about Devil in the Woods and how it came to be.

D.A. Lockhart: As with any collection of writing, it was a good length of time from start to finish with Devil in the Woods. The first few letter poems for the collection appeared around a decade ago. They were experiments really for me as a young poet. At the time I was studying a lot of Richard Hugo and trying to come to grips with being the only Indigenous person and voice I could find locally after moving to Indiana for graduate school. The first series of poems was maybe about three to five letter poems. I had been away from Canada for a good amount of years at this point and the way they were opening up a dialogue between who I was and where I had come from did something for me. While I put them down for a bit, basically to finish my MFA thesis in short fiction, I found myself returning to them after we returned to Canada in the fall of 2013.

In that return, there was definitely a culture shock for me. The Canada that I knew had been dismantled by subsequent Harper governments and I needed to reestablish myself in terms of my connection to the country I grew up in. Idle No More had really blown up in terms of the damages that had been sustained and then amplified upon Indigenous Canada in my absence. In all honesty, I felt voiceless in the whole thing. And Devil in the Woods grew out of a need to craft a conversation with the country I had just returned to and a way to internalize the physicality of that move and work my way through the Idle No More movement that was blowing up all around Indian Country; maybe you could call the process behind this collection ultimately healing and igniting. As I returned to my writing post-graduation, I looked for a projects that spoke to the connections that I knew I once held to Canada. I saw in the letter poems that connection.

So I knew I had to build something out of these handful of letter poems I had. I returned to Richard Hugo, revisiting his 33 Letters and 13 Dreams collection, and found in it the structure to encapsulate an Indigenous voice and to open a conversation with non-Native Canada. As Lenape however I was struggling with notions of religion. An internal conflict between the imposed settler system of powers and prayers and the established Old Ways of my ancestors. The prayer poems emerged as the way to reclaim that religiosity. The cover is an homage to Indigenous sovereignty with its take on the famous Sudbury water tower graffiti and most importantly the use of Pernell Bad Arm’s now infamous words.

ALU: It’s been argued that physical geography shapes our identity, that there’s a connection between our physical place in the world and who we are. As a writer, in what ways does your natural environment inform your writing?

DAL: Easy enough, I have to say it is everything. The natural environment runs through everything I write. Devil in the Woods is profoundly rooted in the natural world around central and southern Ontario. It’s why the reader finds themselves in places like the Coffee Time in Fowler’s Corners, a beach in Cobourg, or a lake in Haliburton. And each physical place matters because it grounds the poet and the reader in the same physical space. Which says much to what the collection as whole is trying to do in terms of speaking to bigger aspects of the physical spaces and Indigenousness and sharing. I believe the land is the universal. It is creation and through creation we are all together. Obviously there is a whole wide spectrum discussion we can have, and I am often having in my work. But right now let’s say that my writing is focused through the physical nature of our spaces in creation. The natural world exists everywhere that we can inhabit. This means urban, rural, suburban, the middle of Waabiishkiigo Gchigami, all of it is the natural world. Every bit of our language and experience is tied to these places. I might say wazhashk and someone else might say muskrat, but we are both able to connect those very different words or speech acts to a part of creation. And in that connection there is something that reaches across cultures and peoples and languages. To a certain degree I would say that successful metaphors and successful writing relies upon that critical connection to the physical world. I say all good writing is rooted in the world it comes from. You can feel its breezes, hear its songs, see the sheen of its coat.

And I do draw my medicine in terms of my craft and my life from specific spaces of creation. I am drawn spiritually to the area of Opeksipu (White River) in Central Indiana in a way I can’t quite rationalize or fully explain. It’s worked its way into two of my books. So has the area around Waawiiyaatanong. In all honesty, I am most comfortable in Carolinian forest and the lake regions about the Souwesto portion of the province. The majority of my work is rooted in that—for lack of a better term—ecosystem. I lived in other places like Southwestern Montana and Central Ontario and yet it's here I return. We are the portions of the world we carry with us. We are strengthened by the roots we sink into the natural world.

ALU: Who are some of your favourite Ontario-based writers?

DAL: There are so many exceptional writers and I know it’s impossible to play favourites. I can give you a couple of recent works by Ontario-based writers I have really dug in a big way. Here’s a quick list of four books I’ve really been into in the last little bit:

I will admit that I have thoroughly enjoyed a lot of Armand Garnett Ruffo’s work. His collection Treaty# (Wolsak & Wynn) is fantastic though. It affords the reader lyric meditations on the seemingly defining parameter from Indigenous peoples in the province. Like his other work, Treaty is an important work.

Tom Cull’s Bad Animals (Insomniac Books) is one of the collections of poetry that I’ve been searching for without knowing it. Cull’s non-literary work with the environment around southwestern is well known and his wonderful debut collection reflects that passion and commitment through his lyricism and writing. I adore this work as standalone and love it all the more for the fact that it turns Cull’s important daily work into an important literary experience.

Alessandra Naccarato’s Re-Origin of Species (Book*hug) affords a beautiful mediation on the concrete natural world. Her images are haunting and carry the reader to world that is both notably outside of Ontario but decidedly Ontario in its consciousness. So much of these deal with the fluidity that comes with the natural world and helps to breakdown problematic entrenched notions of understanding. A strong and important voice in CanLit today.

Aaron Schneider’s Grain-Fed (Quattro Books) is an excellent experimental style of fiction that explores celebrity chief culture, bougie-catering tourist packages, and manner that people connect to each other and the natural world. Schneider’s book is a short read but packs a lot in its brevity.

FROM DEVIL IN THE WOODS

I pray that words

over moss and rock

Pray that each letter,

at the margins, snow

Pray that this highland

meltwater shall slip into

and quench the thirst

of those who recall

so little of the places

and words made silent

by the distance and guilt

that make every winter

a song we shall not

D.A. Lockhart is the author of The Gravel Lot that Was Montana, This City at the Crossroads, and Big Medicine Comes to Erie. His work has received multiple Pushcart Prize nominations. He is also the publisher at Urban Farmhouse Press. A Turtle Clan member of the Moravian of the Thames First Nation, Lockhart currently resides at Waawiiyaatanong on the south shore of the Detroit River (most often referred to as the border cities of Windsor ON and Detroit MI). Devil in the Woods is his fourth poetry collection.

Purchase a copy of Devil in the Woods for 15% OFF until January 31, and stay tuned for more Read the Provinces featured authors all month long here on All Lit Up. Follow us on Twitter, Facebook, and Instagram with the hashtag #ALUreadtheprovinces. 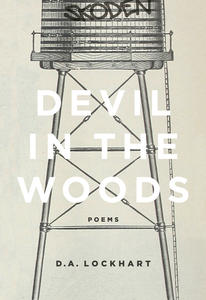