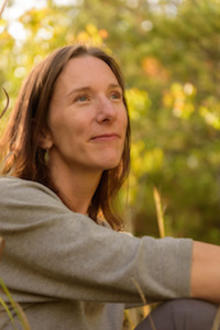 Written during the decade when she became a mother and lost a mother,  Auguries (Brick Books) reflects Yukon poet Clea Roberts' evolving understanding of life and death and the tensions that exist therein. We sit down with Clea to talk more about how the ancient practice of auguries similarly reflects our poetic frameworks and the power of the wilderness to both sustain us and remind us of our own mortality.

All Lit Up: Tell us about your poetry collection Auguries and how it came to be. 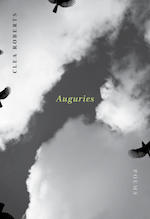 Clea Roberts: The poems in Auguries attempt to articulate my evolving understanding of mortality and love. The poems are about intimacy (both nascent and ancient), spiritual wilderness and connection, as well as finding a sense of celestial awe in the domestic everyday.

I chose the title Auguries because I think all poetry has an augury-like quality to it. The ancient practice of auguries often involved drawing an imaginary field in the sky, observing the types and behaviours of birds flying through it, and then using that information to inform decisions and actions. Similarly, a poem gathers and frames details of the world for us—and in doing so, it creates a micro-narrative that can inform our perceptions and responses.

I wrote the poems in Auguries during a decade in which I both became a mother and lost my mother. I guess, in many ways, in becoming a mother I also became my mother—or at least I gained new insight into my mother’s life and struggles. The poems in Auguries are vessels for the complex emotions that came with new motherhood and the loss of a parent: all the permutations of love, the joy and the grief of saying the first hello and the last goodbye. I wanted to write about the tension and release possible in birth and death, as well as the intense feeling of being so inconsequential and yet so present in the world during this time in my life.

CR: I’ve lived in enough big cities to know that while I admire a lot about urban life, only wilderness can truly sustain me. I’m drawn to mountains, forests and rivers and I’m uncomfortable with the idea of human supremacy over nature. Human supremacy is driving unhealthy consumption patterns that hurt the environment.

The wilderness brings me back to myself, quiets my mind, and grounds me in what I really need—to be mindful of mortality (the cycles of life) and to give and receive love as part of a community (an ecosystem). These are the things I’m writing about right now, so I guess this is the most fundamental way that wilderness informs my writing.

ALU: Who are some of your favourite Yukon-based writers?

CR: Where do I start? Ivan E. Coyote comes to mind. Also, I’m always eager to read new work by Jamella Hagen, Kirsten Madsen, Lily Gontard, Eva Holland, Tara Borin, Elaine Corden, Michael Reynolds, Joanna Lilley, Patti Flather, Leonard Linklater and Peter Jickling, just to name a few. The Yukon’s contemporary literary scene is definitely on the cusp of blooming into something quite extraordinary, and it has been exciting to see it gather momentum since I came to the territory almost 20 years ago.

From the Restaurant at the Marina

I admire how the ocean

explains to the sky

a cluster of sailboats

tacking in the wind,

the soliloquies of gulls,

the largesse of waves

Tonight I want the special;

but before that, I want

of appetite, air as salty

as your shoulder blade,

of creosote, and otters slick as midnight

running up and down the dock.

I want to perch on the rigging

of this life, smell the wind

just before it catches the sail.

Grief is a slow

and bright, it can hold

up your porch roof

Clea Roberts lives on the outskirts of Whitehorse, Yukon. Her work has been
nominated for the League of Canadian Poets’ Gerald Lampert Award and the ReLit
Award and has been translated into Japanese, German and Spanish. She facilitates a
workshop on poetry and grief through Hospice Yukon and is currently completing a
MFA in creative writing through the University of British Columbia.

Purchase a copy of Auguries for 15% OFF until January 31, and stay tuned for more Read the Provinces featured authors all month long here on All Lit Up. Follow us on   Twitter, Facebook, and Instagram with the hashtag #ALUreadtheprovinces. 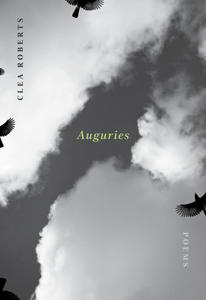