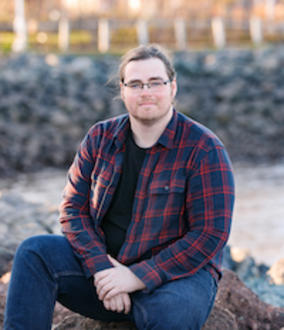 If the first thing that comes to mind when you think about PEI are L.M. Montgomery's idyllic island visions, Chris Bailey's debut poetry collection  What Your Hands Have Done (Nightwood Editions) will offer fresh perspectives. We sit down with Chris in this ALU Read the Provinces interview to find out more about how his personal experience as a commercial fisherman has filtered into the collection, giving it a local lens full of truth and honesty that is sure to resonate down through generations.

Get What Your Hands Have Done for 15% OFF until January 31!

All Lit Up: Tell us about your poetry collection What Your Hands Have Done and how it came to be. 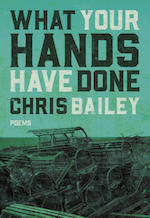 Chris Bailey: What Your Hands Have Done is a bit of a tour through my life, or a life not totally unlike mine, that has the narrator growing up in a large, close-knit fishing family in rural PEI and getting away to Toronto. A lot of my writing is me explaining myself, or trying to make sense of me and the people and places around me, and this collection isn’t any different. It looks at the local in order to be universal. People crave to understand and be understood, which is why I prefer a leaner style. And I wanted to write a book my father could pick up and read and get if he wanted to. He claims not to have read any book since they made him read Anne of Green Gables in school, and I believe him. But I did walk in on my mother reading him some of it at the kitchen table, which was weird for me. I think people in rural PEI, or rural places, might see themselves a little more in this than in, say, The Great Gatsby. Not to start a beef with Fitzgerald right now, or anything. It’s the sort of book that, if I knew was possible, I would’ve picked up writing a lot sooner than my undergrad when I needed an elective to graduate with a BSc.

When I got into the University of Guelph’s MFA program, I made a list of things I wanted done in my two years. The idea of having nothing but my degree to show was terrifying. It’s a weird thing to come from where I’m from to go to school to write. My family, I figured, likely thought I was fucking around and I didn’t want to come back with empty hands and empty pockets. I wasn’t an English student and was worried about being behind or falling behind, but thought if I worked my ass off maybe there’d be some luck found. The list: write a thesis novel, crime novel, short fiction ms, poetry ms, get an agent. I got the manuscripts written. One of them was What Your Hands Have Done. But I didn’t get an agent and two of those manuscripts weren’t very good and are currently being stripped for parts.

The book was rejected by everywhere until Nightwood got a hold of it. Some form rejections, some personal. Some nicer than others. At least one bizarre rejection that I delighted in. Then my friend and classmate, Julie Mannell, told me I should submit to Nightwood as their deadline was yesterday. I did. I cut out a lot of the more sentimental poems and replaced them with poems-as-character-sketches, and Nightwood picked it up. There’s a lot to be said for the right eyes at the right time and doing things when people who know more than you say, “hey, you should do this.” I’ve been very fortunate in the friends I’ve made and people I’ve worked with since I started this writing thing. I don’t thank any of them enough.

CB: The PEI government had this ad campaign years ago, calling the province “The Gentle Island.” A woman I was seeing once told me the place looks like a paradise in the pictures she’s seen. With LM Montgomery’s shadow hanging over the place, there’s expectations of the idyllic, and people tend to romanticize or mythologize Atlantic Canada, rural living, or jobs like farming or fishing, or even working in a processing plant. Luckily, those are somewhat easy to subvert by being honest with what’s gone on around you. Or by being honest in a way writing is honest. Not quite true but gets to the truth. I say luckily because I can be a lazy writer. A cigar really is a cigar sometimes, I swear.

I never lived anywhere but PEI before I left to do the MFA. So I went from PEI to Toronto. Some may say there’s a slight shift there. A shift in context. I guess my “natural environment”, though there are places I sometimes rather be, is rural PEI, working with my father or brothers on the boat or running 40lb. blocks of frozen mackerel through a bandsaw to be bagged for lobster bait. There’s a tactile-ness to things that you might not get elsewhere. Jobs you don’t get to do everywhere else. Things seen. Expressions. I love how people talk in PEI, especially when they’re saying something odd or new, or something old in a new-to-me way that’s better than you could make up punching at a keyboard.

My uncle once said of someone, “She’s so mean she wouldn’t buy gas for the saw.”

That same uncle said of someone else, “The place will go under with him at the helm. That one could fuck up the Lord’s Prayer.”

ALU: Who are some of your favourite PEI-based authors?

CB: PEI has a great history of good poets coming from there. They don’t always stay, and sometimes people come from elsewhere. I don’t have a running list and there’ll be people I forget or forget are from here or are, in some way, tied to PEI. Mathew Henderson and Steve McOrmond come to mind. Richard Lemm, David Helwig, David Hickey, Laurie Brinklow, Deirdre Kessler, Brent MacLaine. Bren Simmers is out on the Island now and her stuff is great.

FROM WHAT YOUR HANDS HAVE DONE

The way your father tells you is simple. To the point.

Speaking with the tone he’d use to say the direction

of the tides, what your brother Tom in Fort Mac said,

or describing the noise the truck axle makes.

His hand on the thing sprouting from his neck:

it off next week. A strip of paper towel in front of him.

A cup filled with tea. A new pack of cookies that rattles

when he reaches in, not looking at you. He endures

your stunned silence, says, I asked if he had his pocket

knife on him, said he could do it right there

if he wanted. Then: Sit down, boy. Have a cookie.

Not knowing what else to do or say, you sit.

Take a cookie. The kind with icing in the middle. One

half vanilla, the other chocolate. He fills ice cream

dishes with these for long days on the boat.

Something to snack on when working in the sun.

You snap the cookie in two, then four, and stare

a while at what your hands have done.

HOW COULD YOU FORGET THIS?

Don’t forget where you came from. Simple.

Easy like dropping a slut rock tied to a herring

chains skidding past your feet against the deck’s

worn floor. So many boats on the water

at night, your father calls it a city. Curses

the Bruces for using anchors instead of stones.

They shred the nets, fuckers, using those things.

The pain in your back, your arms, from a night

back while herring blocks blood red on the sounder.

Your father telling you, The work is hard

and the smell follows you but the money don’t

stink, now, does it? That bathing after work

knocks a few scales off. How could you forget

this? Now with your first-ever Starbucks coffee,

facing a four-storey wall of greenery as it filters

the air in this school building. Clean air in your

diesel lungs, a book in your softening hands.

Chris Bailey is a commercial fisherman and from North Lake, Prince Edward Island. He got his MFA from the University of Guelph and is a past recipient of the Milton Acorn Award for poetry. His writing has appeared in Grain, Brick, The Buzz, The Town Crier, FreeFall and on CBC's Mainstreet PEI. Chris' debut poetry collection, What Your Hands Have Done, was published by Nightwood Editions (2018).

Purchase a copy of What Your Hands Have Done for 15% OFF until January 31, and stay tuned for more Read the Provinces featured authors all month long here on All Lit Up. Follow us on  Twitter,  Facebook, and  Instagram with the hashtag #ALUreadtheprovinces. 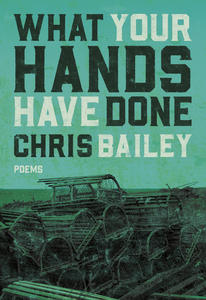 July 2, 2019
In House: Inside the Biblioasis Book-Binding Party