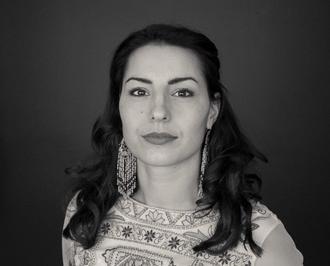 Northern Indigenous author Catherine Lafferty talks to us about her connection to place, the barriers to entry for Indigenous writers in the Northwest Territories where she lives, and her memoir Northern Wildflower (Roseway Publishing). Scroll on for our chat with Catherine and read an excerpt from her novel.

Get Northern Wildflower for 15% off until January 31!

All Lit Up: Tell us about your book Northern Wildflower and how it came to be. 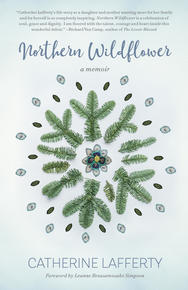 Catherine Lafferty: Northern Wildflower started out as a journal about five or six years ago. I initially wasn’t going to share my writing with anyone. When I started journaling, I began with recollecting my very first memory. It was initially a way for me to find closure and to heal. When I was younger, I kept many journals but would often burn them in an effort to move on from my hurt. Many triggers came up for me when sorting through my memories but as I delved further and further into the writing process, the words started to unravel into a book that I knew I had to share with others who might be going through the same struggles, to help them relate, to help them feel like they weren’t alone. I shared the first draft of the book with my cousin and she said she read it in one afternoon. Her support encouraged me to try and publish the book because the experiences in life that I was sharing were also experiences that many other intergenerational survivors of residential schools and colonialism were going through too and I wanted to provide a safe place for readers to land and to know that they are not alone. In writing Northern Wildflower, I realized just how much influence my grandmother had on me and it unfolded into somewhat of a tribute to her, so in a way this book is not only a memoir, it’s a story of family, resiliency and the importance of education and I hope that the book has fulfilled its purposes which is to reach those that need to read the words on the pages and feel empowered.

CL: Living in the north has informed my writing tremendously in that there are so many stories just waiting to be told yet these stories must be told with respect, acknowledgement, and permission. Especially our sacred stories. In writing settings into my fiction and poetry, I tend to refer to places in the north that I have a deep connection to. I use these places as setting backdrops and try to describe the northern landscape as best I can. I don’t particularly have a set place that I go to write but I do take account of the nature that surrounds me when I’m hiking or walking in the bush or when I have the opportunity to venture out on boat or skidoo and I try to write about what I see when out on the land, down to some of the smallest details, taking in the animals, the seasons and the story that the land is trying to tell me by simply taking the time to stop and listen.

ALU: Who are some of your favourite authors based in the Northwest Territories?

CL: Sadly, there are not many Indigenous authors living in the north and the stories not yet written are the stories that I want to read. Part of the reason why there are very few authors coming out of the NWT is that there is no publishing house in the north which creates a barrier for people to get published. Also, the publishing world has not been easy to break into and there are many barriers in the way for Indigenous writers particularly. I think this has to due with the fact that Canada is not quite ready to hear Indigenous people’s stories because that would mean they would have to rewrite the history books. Because Indigenous stories are so often left out of the main publishing industry, I want to support Indigenous writers as much as possible in having their voices heard, which is why I will only acknowledge Indigenous authors from the north in having an impact on my writing.

I believe that our oral stories are just as much important as our written. Some of the most amazing people I’ve met are orally history storytellers like Fred Sangris and Mary Rose Sundberg who I have the utmost respect for.

My mentor is Richard Van Camp who is from the NWT. He has been a solid support system for me in my writing journey. When I was finished writing Northern Wildflower, I asked him “What do I do now?” and he said simply “Keep writing.” And so, I did and now I have a novel being released in the fall of 2020 called Land-Water-Sky that I’m very excited about. I strongly believe that my ancestors guided me through the writing process of Land-Water-Sky and I am incorporating my Indigenous language in the book as much as possible because I strongly believe in the importance of revitalizing our languages.

I also look to authors like George Blondin, who was brave enough to share Dene stories despite controversy. I love Siku Allooloo’s short stories and John Testo’s stories in Trapping is My Life, and children’s authors that place emphasis on the importance of revitalizing Indigenous languages like Christal Doherty’s award-winning book How Raven Returned the Sun. I hope to see a storytelling renaissance with Indigenous authors emerging from the NWT in the coming years, like Louis Riel said “My people will sleep for one hundred years, but when they awake, it will be the artists who give them their spirit back.”

Yellowknife felt like an increasing burden on me and I would have done anything to try to get out, but running away and hitchhiking doesn’t get you very far when there is only one road out of town. My friends and I would slowly make our way to the mall from the arcade to check things out and then turn around and walk back to the arcade. Continuously walking in a loop all day long was the only form of entertainment for teenagers with a lot of time on their hands and no money.

Sure, I could have been in school trying to bring up my grades, but that was no fun; plus I was so far behind in my studies from skipping school for so long that I would have to put in twice the effort. Combined with the fact that all my friends were out having a good time, school was low on my list of things to do.

I began a short-lived attempt at stealing, which consisted of trying to lift clothes and makeup, but I made for a horrible thief. My friend was sporting some nice clothes and told me that she got her clothes from stealing. I wanted in, so she brought me to the mall and we stuffed our backpacks with clothes while pretending to try stuff on in the change rooms. The store clerk was suspicious and called security. The mall security chased us all the way down the street until we hid in the back alley behind a crummy motel, huffing and puffing and trying to empty our bags before we got caught. Ever since then, I always feel like I’m being followed when I’m in an expensive store. I can feel the clerk’s eyes on me and I instantly start to feel like I’ve done something wrong. It’s the same feeling I get when the police are behind me and I am afraid I’m going to get pulled over, even though I’ve done nothing wrong.

Looking back, I only stole because I didn’t know the consequences, and once again, I had to learn the hard way. I have always liked having nice clothes, though, so on my fourteenth birthday my friend enticed me to spend my birthday money in Edmonton on a shopping spree. She told me that her mom lived in the city, so we would have a place to stay when we got there. All I needed to do was buy a plane ticket and save a bit of money for shopping. I only had enough to buy a one-way ticket, but I wasn’t concerned with how I was going to get back. I should have known it was too good to be true. The minute we touched down in the city, she unexpectedly brought me to a party out in the suburbs. I was turned around and lost. The people at the party were loud and rowdy. I felt so out of place, because deep down I was a shy, lost little girl who was far from home and didn’t know anyone.

I sat in a corner of the room, keeping to myself while everyone partied around me. In the middle of the night a guy with a bandana around his head came waltzing in with a rifle stowed in his baggy jeans, bragging and laughing about how he had just scared an old man underneath a car and stolen his money at gunpoint. My anxiety hit hard, and I thought that if I didn’t act like I fit in he would try to intimidate me too by pointing the gun in my direction.

The next day I told my friend that I wanted to go home. I couldn’t dare stay at that house another night, so I told her I’d rather stay in a shelter. I checked into a youth shelter in the inner city, and my anxiety spiked through the roof. I felt so small, lost and alone. I was more afraid than I had ever been before. I managed to borrow enough money for a cheap bus ticket home. It was April and the ice on the rivers and lakes was rapidly melting, but the bus driver pushed on over the ice road, and as we crossed the mighty Mackenzie, he assured us passengers that it was safe enough to drive on. The bus was half submerged in the melted water that pooled on the surface of the ice, but we made it across safely, to everyone’s surprise. Not long afterward, the bus starting slowly filling with smoke. The water had gotten into the battery, causing it to leak. Everyone on the bus had to hurry off and huddle in the cold on the side of the road waiting for someone to come and help. When darkness fell, I hitched a ride home down the old dirt road that I had gotten to know so well, and I swore to myself that I would never run away again for as long as I lived.

Catherine Lafferty grew up in Yellowknife, Northwest Territories, where she was primarily raised by her grandparents, who instilled in her a sense of pride in who she is and where she comes from. Catherine honours her First Nation background through her position as a Council Member for the Yellowknives Dene First Nation. Her hobbies include writing, creating music and film, and spending time with her family.

Purchase a copy of Northern Wildflower for 15% OFF until January 31, and stay tuned for more Read the Provinces featured authors all month long here on All Lit Up. Follow us on  Twitter,  Facebook, and  Instagram with the hashtag #ALUreadtheprovinces. 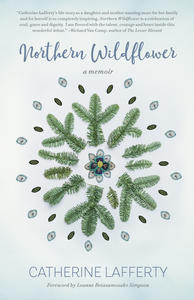