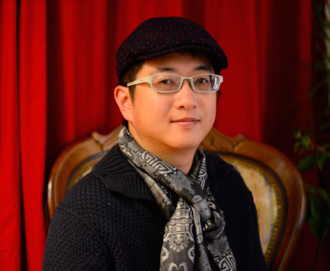 A multi-talented scientist, singer and writer hailing from Taipei, Chih-Ying Lay is the author of Home Sickness (Linda Leith Publishing), a new collection of stories that present a paradoxical yearning for home – the familiar feeling of homesickness –  as well as an intense desire to escape from its tethers. In this interview, Chih-Ying discusses LGBTQ+ culture in Taiwan, translation and issues of censorship, and the hope that his stories, translated here for the first time in English, will provide a bridge between Canadian/English readers and Taiwanese culture.

All Lit Up: When and where did you begin writing?

Chih-Ying Lay: I started writing as a child in Taiwan. I always liked writing fiction and I used to have an endless draft of an immature novel. In senior high school, I rewrote a classical short story into the modern form and showed that to my teacher. She thought it was interesting so she encouraged me to write a short story for the school literature prize. My story won second place. That was in 1997. It is included at the end of the Mandarin original of Home Sickness, but it was not translated for the English version. After that, I spent a long time learning what a “modern” short story might be like. I wrote some unpublished works and only got the chance to publish another short story in 2004. I won my second literary prize with that story.

ALU: What kind of status or support do writers in Taiwan have?

CYL: In the public sector, the National Culture and Arts Foundation and the Ministry of Culture both offer grants and sponsorships to writers. Most municipal governments also provide funds for writers as well as awarding literature prizes. Three mainstream newspapers used to offer very big prizes for literature and would promote the writers a lot. However, many of these prizes either disappeared or changed their rules. I won the first place from the Liberty Time for “Kiwi Fruit” in 2006, but the influence of the prize had already started to decline as a result of the rise of digital media. Recently, it seems that publishers are adapting to the new media and readers are once again interested in Taiwanese writers. Several new works have been adapted for TV series or movies, for example, boosting the publishing market in general. However, if a writer in Taiwan wants to get by on their writing alone, they better live in the countryside, or with their parents, or just be a hermit.

ALU: What is it like for the LGBTQ community in Taiwan?

CYL: LGBTQ communities have always been in Taiwan, either in the traditional sense or modern sense. In the early 90s, some activists, professors and young gay/lesbian people introduced more theories from western countries, including queer and modern transgender concepts. They initiated gay pride and established the first gay bookstore and lesbian cafe. In 2019, the Taiwanese government legalized same-sex marriage, the first country in Asia to do so.

It is interesting to see how literature played a key role for gay/lesbian people before 21st century. Fiction was the only place where they could understand what was going on with themselves or each other. There were several famous works in Taiwan with homosexual subjects, such as “Crystal Boys” by Kenneth Hsien-yung Pai, “Chang Wei” by Chao-Sen Ku, many fictional works by Ta-Wei Chi (he also wrote the very first book on literature history of Tong-zhi, which is a popular term for homosexual in Taiwan), and “Notes of a Crocodile” by Qiu Miaojin (the main character’s nickname became the semi-formal term to indicate lesbian in Asian countries). Writers were quite an important part of the LGBTQ community in Taiwan, with gay writers dominating the literature awards. That made people joke that all the good writers in Taiwan are gay. But of course they are J.

ALU: Do you have to worry about how you depict the Chinese government?

CYL: Most writers who write in Chinese know that if you would like to publish anything in China, you don’t touch several topics: homosexuality, recreational drugs, Tiananmen massacre, and any ideology for independence (Taiwan, Tibet, and others). If you broach these topics, they either ask you to cut it (for translated works, some writers do not even know their books have been censored), or they just simply don’t let you publish there. Also, and this might be surprising, if you write in traditional Chinese (most people in Taiwan, Hong Kong and old immigration communities in North America or Europe use traditional Chinese characters), you have to transform your writing to simplified Chinese if you want to publish in China and change the phrasing layout to western format (left to right horizontal, instead of right to left vertical).

I had one novella published in a Shanghai magazine, but that was my only experience publishing in China. In general, Taiwanese people offend the Chinese government just by stating that we are from Taiwan. Worrying about depicting Chinese government in my writing is not really a concern because our existence is irritating to China already. When Taiwanese people participate in international events, our identity is either forced to change or is protested by Chinese participants. I experienced that when I was in the World Youth Choir. Taiwan is a kind of a “canary in a coal mine” for the world in terms of how we are treated by China. We are always warning the world by showing what we are experiencing – not that many people listen to us because money from China is more important. Taiwanese people are on the frontier of decoding Chinese tricks, before other countries are even aware. We Taiwanese knows Chinese culture too much. There was an ancient Chinese saying, which we Taiwanese mock: you never comment on Chinese emperors and rulers, even praising them can get you in trouble. The funny thing is that even in the 21st century, some people still take this as the fundamental dogma in a “democratic” country. Yes, People’s Republic of China (a.k.a. Communist China, mainland China) is democratic according to its own definition.

CYL: I don’t think I have a balance among the three, I just prioritize based on deadlines. Usually, if there are upcoming concerts, I adjust my routine and energy for that. If there is a deadline for commissioned works for writing, I will block some time for it. Most of my energy is reserved for science since that is my main work.

ALU: Some of your depictions of queer characters in your book are very subtle and we sometimes have to read between the lines. To what do you attribute this?

CYL: The stories in the book were originally published from 2004 to 2008. I had not come out yet and I lived with my parents. To avoid trouble, I chose to make some gay characters more subtle rather than directly talking about their sexuality. Also, in the ancient Taiwanese society (inherited from China), there is a grey zone between having “brotherhood” and having gay behaviors. Some people may not know their behavior is gay(-ish) in the modern sense. In this regard, I think these characters are probably accidentally very queer.

ALU: Are your stories sometimes autobiographical? Can you give an example?

CYL: People who know me can probably find the fragments of me here and there, but nothing can completely refer to myself or other people. However, one of my friends told me that when she read in the story “Kiwi Fruit” that main character complained that he wanted a girlfriend, she just laughed out loud and said “finally, there is something fictional!”

ALU: This is your first book translated into English, though not your first book. What do you expect it will be like now that you have become a Canadian writer?

CYL: I hope that my short stories could be the vectors or bridges between the Canadian/English readers and Taiwanese culture. The recorded history of Taiwan is not very long but it is complex and interesting. For a long time, Taiwanese people struggled for identity under multiple colonial governments. Even now, Taiwanese people are still discovering their hidden history and constructing their identity. I hope my book can be a primer for readers in Canada and interest English publishers to accept more works from Taiwan. I am very glad that I can publish my book in Canada because this is my second home country. The multiculturalism in Canada really opened my eyes and let me embrace so many people from different backgrounds. Knowing people from different cultures and understanding what they think is a big part of life for me in Canada. The acceptance of the society for different people made me feel very touched to be part of this family.

ALU: What was your experience working with a translator? Is this the first time your work has been translated into English?

CYL: Yes, it is my first time to be translated into English. Darryl Sterk is a very detailed-oriented translator. He didn’t just translate the meanings of the words, he also did logic and fact checks. We had many emails back and forth just to confirm details. If he didn’t have a satisfying answer, he would continue to work on it until it made sense to him. I am very lucky to have him because he knows Taiwanese culture. He began living in Taiwan in the 90s and his Mandarin is more Taiwanese than the one in China. He knows our slang. When there is no way to translate some parts with the accurate translation due to jokes or word plays, he gets creative. He even learned a Taiwanese indigenous language, Seediq, which most people don’t know. He is really a passionate translator.

ALU: Are you working on anything else right now?

CYL: I am writing a story now, but in Chinese – for now only my scientific papers are in English. However, I got in trouble from one of the readers before publishing it. She thought I revealed too much of her private life with one of the characters, but I told her that her experience was just one of the prototypes I was basing it on. She still insisted that I withdraw the character. Another good friend suggested that I write whatever I needed and to be an “Artist” rather than worry about what people think. Unfortunately, even he did not give me a good review for this story. So I decided to rewrite it and take out that troublesome character. This was frustrating and was my first time to experience that. By coincidence during this period, I learned that Marcel Proust experienced a similar situation toward a reader, who did not even want to finish reading the piece. This calmed me down a bit and gave me some hope to rewrite this short story.

Born in Taipei, Chih-Ying Lay came to Canada in 2008 to obtain his Ph.D. in Microbiology at McGill University. His first collection, published in Taiwan under the title The Escapist (2008), includes stories awarded the Formosa Literature Prize in 2005 and the Liberty Times Literature Prize in 2006. He has since published a novel, The Ideal Family (2012), and another collection of short fiction, The Comic Lives of Losers (2016). A guest broadcaster both in Taiwan (2007) and for Radio Canada International in Montreal (2016), he sings in Ensemble Sainte-Anne Singers and Musica Orbium and works as a senior research scientist in Montreal.

Thank you to Chih-Ying Lay for chatting with us and to Linda Leith Publishing for connecting us!

Grab your copy of Home Sickness on All Lit Up>>

March 13, 2020
A Mature and Intelligent Period of Grieving: On Death and Humour in Writing