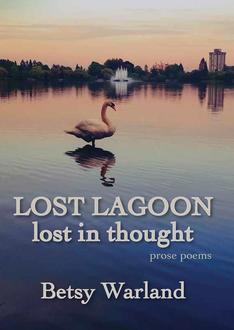 Betsy Warland returns to poetry with her 13th book, Lost Lagoon/lost in thought (Caitlin Press) – drawing inspiration from Mohawk poet and writer Pauline E. Johnson. In this collection, Betsy writes of the Lost Lagoon in Vancouver's Stanley Park–given its name by Pauline– as a way to explore how urban living alters our sense of the natural world and how human relationships form and derive meaning from 'place'.

In trademark lyric prose, Warland’s roving observations in and around Vancouver’s Lost Lagoon offer insights into nature, narratives, and the urban environment. Her book engages with the ever-increasing questions such as: how significant the specificity of place is to story, how our relationship to nature is altered by urban living, and how we might return to the natural world? Warland also reflects on poet she considers to be the first spoken word performance poet (who gave the lagoon it’s name), Mohawk poet and writer Pauline E. Johnson.

In the narrative, after moving to Vancouver’s West End in 2014, The Human is drawn to a small body of water called Lost Lagoon in Stanley Park. Daytime visits, with a surprising array of wildlife, are quietly revelatory; but so is suddenly waking in the night when owl hoots, or geese startle in alarm at otter on the prowl. The Human savours this up-close relationship between wildlife and fast-paced urban living, questioning the interface between the urban and natural world.

Upon learning the lagoon was named by Pauline Johnson, this fellow poet becomes a presence in the narrative. Pauline Johnson wrote evocatively about the lagoon: “Among the wild rice in the still lagoon/In monotone the lizard shrills his tune.”

During five years of intimate counterpoint between urban living and wildlife, The Human’s notions are challenged and altered. Questions of how significant the specificity of place is to story, how our relationship to nature is altered by urban living, and how we might return to the natural world. Reminiscent of Henry Thoreau’s Walden Pond, perceptions about nurturing, fear, inventiveness, delight, death, protection, humour, even tenderness change as the lagoon has exposed what being human in the twenty-first century actually means.

This intimate collection of prose poems is Warland’s thirteenth book. It marks her return to poetry since her 2005 collection, Only this Blue.

Betsy Warland reads from Lost Lagoon/lost in thought - Part I

A  special thank you to Caitlin Press and Betsy Warland for sharing Lost Lagoon/lost in thought with us.

Check out more from our Poetry in Motion column >>

April 28, 2020
DiscoverVerse: Choose Your Own Poetry