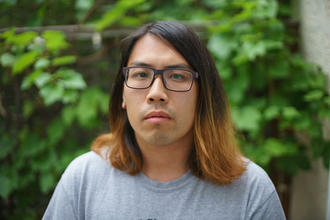 We electronically chatted with Jean Marc Ah-Sen⁠—author of the highly praised novel The Grand Menteur⁠⁠—who is back with a literary mashup of varying prose styles in his new short story collection In the Beggarly Style of Imitation (Nightwood Editions). Filled with intriguing characters who do despicable things and vital takes on race and identity, In the Beggarly Style of Imitation is a refreshing, intensely readable collection that may have started as an exercise in imitation but is wholly distinctive. Read on for our interview with Jean Marc.

All Lit Up: Can you tell us a little about your recently published short story collection In the Beggarly Style of Imitation? Were there any short stories or novels that influenced your writing when you were working on the collection?

Jean Marc Ah-Sen: It’s an exercise in “bad taste” basically. I went riffling through the rubbish heap of a few hundred years of literary output and tried to curate stories and movements I believed had unfairly diminished standings, sort of asking along the way if even trifles can be deserving of artistic contemplation. I wanted to apply that notion to the most despised, reviled, and forgotten kinds of writing possible: fan fiction, the epistolary novel, erotica, political romance, the picaresque, conduct literature, bawdy songs, the academic essay, etc. Italo Calvino’s If on a Winter’s Night a Traveler, E.T.A. Hoffmann’s The Life and Opinions of the Tomcat Murr, and Voltaire’s A Pocket Philosophical Dictionary were vaguely on mind when I wrote the book, mainly because of the tension between ambitious stylistic variation between chapters and a kind of uniform authorial voice presiding somewhat paradoxically over those texts. There’s an implicit understanding that the novel has to be a cohesive work of stylistic purity; with this collection, I wanted to see if I could make an incoherent work of stylistic extravagance.

ALU: If we asked you to describe your collection in a handful of nouns only, what would they be?

JMA: Maybe a salmagundi—abundant if slightly unpresentable, a little dangerous if consumed in a single sitting.

ALU: The stories in your book vary in their prose styles. Is there something that inspired your approach to writing the collection in this sort of experimental way?

JMA: Imitating prose styles has been my only real apprenticeship in writing—fumbling around for a methodology, building my style on the backs of writers I admired, I reasoned that if I could ape Blaise Cendrars or Edith Sitwell, well then maybe I could come at a voice that was my own and located in a tradition I admired. The idea of the book is for it to function like a covers record (or maybe a reading list) where my sensibility and obsessions come across. I find it funny when writers talk about influences whose styles have almost no bearing on their work. I went the opposite route. Everyone I’ve ever stolen from gets some sort of acknowledgement.

ALU: In one of the stories, “Underside of Love,” a character makes an astute observation about race—that he and the narrator are criticized by their white friends “for losing our roots in the unnavigable canyons of the white world.” These two characters seem to straddle two worlds: white and non-white. Can you tell us about the role of race and identity in the story and more widely in the collection?

JMA: That chapter was based on the Austin Clarke story “Give Us This Day: And Forgive Us,” which centres around the idea that political self-realization can’t really occur below a certain threshold of poverty; Clarke’s elegant way of talking about the hierarchy of needs without boring a reader to death. I reworked the plot for my purposes, which was an attempt to have a conversation with my politics as a young man while also dramatizing how interpellation occurs among immigrants in a new country—how they derive their subjecthood in relation to the “higher authority” of the culture of the home-country and the degree to which they assimilate or reject those values. My book generally takes a cynical attitude towards the use of race and identity for economic profit or social capital—whether from ally or oppressor, under the auspices of diversity and representation or not, that behaviour is usually bunkum and should be viewed suspiciously in my opinion.

ALU: The first book you had published was a novel—The Grand Menteur—which is presumably a different experience than writing a short story collection. What do you like about the short story as a form? Did you enjoy writing one form more than the other?

JMA: Grand Menteur and In the Beggarly Style of Imitation was originally one book, a novel within a collection; it was probably too experimental, and fate seems to have wanted me to get paid with two book advances. I love reading short story collections because you can kind of approach them like you would a periodical—in fits and starts, in your own time. The pressure for readership, and by extension for authorship, also gets attenuated; I’m catering to short attention spans, especially my own. It was liberating to know that I would be abandoning most of the characters after introducing them; it forces you to make them more dramatic, and hopefully memorable; it keeps the momentum of action propulsive too. With all the juggling that goes on with a novel, there’s too much of a chance that an author will be hoist with their own petard.

ALU: The cover design is super striking! As the author, what was your role in the design process? Can you tell us how it came about?

JMA: I’ve been an admirer of Boston photographer Ally Schmaling, and I came across their photo of Kitty Collins around the time we were discussing ideas for the cover. There are photographs in the book of every character in the collection, but I realized we didn’t have one for my story “Swiddenworld,” the erotica chapter, so I wanted the cover to tick that box. I described an idea for how the type could work against the photo once we secured rights, and Carleton Wilson and Charlotte Gray at Nightwood Editions did the heavy lifting with the design.

JMA: My reading has been very slow since the pandemic started, but I am chipping away at Bertrand Russell’s Satan in the Suburbs and Nikki Sudden’s autobiography, The Last Bandit: A Rock’N Roll Life.

Jean Marc Ah-Sen is the Toronto-based author of Grand Menteur, which The Globe & Mail selected as one of the 100 Best Books of 2015. The National Post has hailed his work as "an inventive escape from the conventional." He lives with his wife and sons.

September 15, 2020
Writing on the road: An interview with travel writer Trevor Carolan