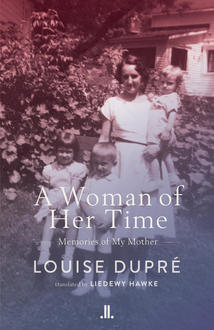 Celebrated Québécois author Louise Dupré’s memoir, A Woman of Her Time: Memories of My Mother (Linda Leith Publishing) is an intimate homage to a woman who insisted on living a life on her own terms. It is also political, hard not to be in a province when the Quiet Revolution and the collapse of the domination of the Catholic Church shook up lives and changed futures. Below, we share an interview between Louise and her publisher Linda Leith about the life of her mother, the institutionalization of her maternal aunt, Quebec, and more.

Linda Leith Publishing: This book is focused on your mother. When did you write it?

Louise Dupré: I had the privilege of being with my mother at the hospital when she passed away. Two months later, I felt the need to write about this terrible night. I wrote the first few pages without knowing it would become a book. Then I asked myself: "Who was my mother?” And especially, “Who was my mother before she was my mother?" One never knows who is his or her mother. I decided to keep going answering my questions.

LLP: Why did you want to write the book?

LD: First of all, I needed to understand my mother's past, but also my own past. I wanted to share my memories with readers and paint a portrait of women living in Quebec in the 20th century. Quebec changed a lot during those years. With the Quiet Revolution in the 60s and 70s, it became a modern society. And my mother, who was born in 1914, was both a traditional person and a modern person. She was a paradoxical woman sometimes.

LLP: There are revelations here about your grandfather’s political views. To what extent do you see him as critical of the Quebec of his day?

LD: Some years before she passed away, my mother told me that her father was a communist. Although he was not a member of the Communist Party, he agreed with Marxist ideals. I knew that he didn't practice any religion and that he was extremely critical of the Quebec of his day, especially the power held by the Catholic Church. He was a tailor and he worked some years in Winnipeg and in Ottawa, where he could read books that were prohibited by the Church.

LLP: The account of the institutionalization of your mother's sister is painful. Did you hesitate to write about that?

LD: Yes, I hesitated. My maternal aunt's problems were painful for my family and we seldom spoke about it. But in many families, there are persons with mental health issues. So, I thought that it was important to write about that and share our experience.

LLP: What effect has the book had in the original French version?

LD: Many people wrote to me, especially about Dr. Donald Ewen Cameron. He was well-known in Quebec as a psychiatrist who was the first director of the Allan Memorial Institute in Montreal. My aunt was one of his patients. Now, we know that he did controversial experiments on his patients.

Dr. Cameron experimented on adults and children, administering electroconvulsive therapy and drugs, including poisons such as curare, without the informed consent of his patients as well as prisoners. He even played a role in the evolution of modern psychological and medical torture techniques. By 1957, the CIA was financing him. While my aunt was no longer a patient by then, we don’t know what sort of treatments she had to endure.

LLP: At what point in the writing did you start including background about earlier times in your mother’s life?

LD: As soon as I decided to explore her memories. It was clear that my mother was close to her own mother, her sister, her grandmothers, her husband ‑ my father ‑ her friends. So, I had to also talk about them. She had worked as an optician for four years in Toronto during and after World War Two. It had been a very important time for her. She had many friends in Toronto. I had to write about it.

LLP: Readers of the translation will not likely have the same understanding of the changes Quebec underwent in your mother’s lifetime. What effect do you hope the English version will have?

LD: I hope that readers of other provinces of Canada will understand Quebec better. I think most Canadians forget just how much Quebec changed in one or two generations. Before the Quiet Revolution, there was the Grande Noirceur, those long years of Duplessis and the all-powerful Church. We struggled very hard to leave our past behind, but we are still shaped by it.

LLP: In all your memories of your mother, what seems to you to speak most eloquently about the woman she was?

LD: Her courage and determination. She had a difficult life, but she was always happy. I don't remember ever seeing her sad or disheartened. She is a role model for me. Like her, I try to find a reason to appreciate life no matter what happens.

LLP: How does this book fit in with your other books? Is it typical or very different?

LD: I have written novels, collections of poetry, and plays, but this book is different because it is a memoir. I put in the book only the events I knew. I didn't make anything up. So, my memoir is full of holes, because there are so many things I never got to ask my mother about. I never wanted to believe that she would one day pass away. We want to keep our mothers forever. So, I wrote a book.

Louise Dupré has published twenty books, which received many awards. Plus haut que les flammes (Beyond the flames) and La main hantée (The Haunted Hand) both won the Governor General's Award for poetry. Her play Tout comme elle, staged by Brigitte Haentjens, was produced in French in Montreal and in English in Toronto during the Luminato Festival in 2011. Many of her books have been translated in English or in other languages. Louise Dupré is member of the Academy of Letters of Quebec and of the Royal Society of Canada. In December 2014, she was appointed to the Order of Canada for her contributions to Quebec literature as a poet, novelist, playwright, essayist and professor. She lives in Montreal.

Thank you to Leila Marshy at Linda Leith Publishing and  Louise Dupré for this insightful interview. A Woman of Her Time is available for purchase on All Lit Up.