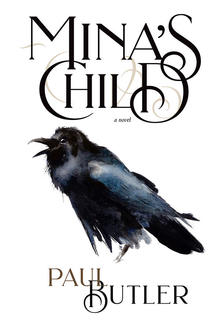 Author Paul Butler enters the dark recesses of the Off/Kilter realm to discuss his newest book  Mina's Child (Inanna Publications), a dark, refreshing extension of the beloved classic Dracula that pulls some of it's main characters and their offspring into the 20th century. In our chat below, Paul shares more about the novel in parallel to examining the Victorian Gothic of the 18th century and some of the underlying and dated themes around women's sexuality and gender roles that cling to Stoker's iconic work. He also shares his fave scene from Francis Ford Coppola's cinematic adaptation and offers one key tip for any writer looking to breathe a little life into their characters...even the undead...

Leyla T: What was it about the characters of Bram Stoker’s Dracula that inspired you to want to bring their families to life and into the 20th century in your own novel?

Paul Butler: I was interested in the way Stoker’s characters would modernize if pushed forward a generation. I thought of Jonathan and Mina Harker in the 1920s mired in middle-aged self-doubt with grown children to challenge their judgements. When you read Dracula today, on one level it’s still an exciting story with starling ideas and imagery. But it also feels as though it’s the last gasp of undiluted Victorian values, particularly with regard to sexuality and gender roles. Move the characters on from 1897, the year of Dracula’s publication, to 1921, the year in which Mina’s Child is set, and the story becomes about an extraordinary set of out-of-date values. Thematically speaking, these values, the ones held by the ‘heroes’ – Jonathan Harker, Arthur Holmwood, Dr Seward, Quincey Morris and even Van Helsing become the most monstrous aspects of the story.

These men who oppose and defeat Dracula are portrayed by Stoker as a valiant and noble band of brothers. While the prose is cozy and familiar, the ideas behind it seem to hold up a mirror to late Victorian ideals which are not 21st century values at all. Nor would they pass muster with young people of 1921 who had lived through a war, who are far less likely to believe in a clear dividing line between good and evil, who no longer assume Anglo-Saxon/Norman blood to be superior to other ethnicities, and who, most importantly of all, do not associate women’s expression with madness or evil.

In Dracula, Lucy Westenra falls victim to the Count, dies from a consumptive-like disease but rises again, transformed into a vampire. It is important not to confuse Stoker’s Lucy with the semi-liberated young woman who turns up in some of the movie and TV versions such as Francis Ford Coppola’s 1993 epic. The Lucy of the novel is a kind of Victorian ideal, soft, innocent, and childlike. When she rises from the grave vampirized Dr. Seward says, “Lucy’s eyes [were] unclean and full of hell-fire, instead of the pure, gentle orbs we knew." When she speaks, saying her arms are hungry for Arthur (her fiancé), there is something “diabolically sweet in her tones.”

He goes even further than this, venturing for the 21st Century reader into Incel territory. If she had to be killed, he says, he “could have done it with savage delight.”

Those of us who are fans of supernatural cinema will be familiar with filmic versions of the story which dramatize this sexual awakening aspect of Dracula’s female victims. Far less explored in popular culture as well as film is the degree to which Stoker’s story is also about the male guarding of women’s sexuality and the sense of fury and loathing that occurs when this guard is removed.

By moving the tale onwards even one generation and still having some of those original ‘heroes’ around, this can come very clearly into focus. The set of invented journals, diaries and letters which make up the original novel, Dracula, now belong to the more modern literary device of the ‘unreliable narrator’ and it’s up to the next generation, especially Mina and Jonathan Harker’s daughter, to piece together a more likely truth.

LT: Many of the books you’ve written, including this one, are steeped in the Gothic tradition. How has this genre/form influenced your writing? Do you have any favourite Gothic novels that you would recommend reading?

PB: I have a great admiration for the gothic novel and as a teenager loved Dracula along with Wilkie Collins’s The Woman in White and The Moonstone. As I get older, I find myself coming full circle, wanting both to read and write deeper into the gothic and supernatural traditions. A big jolt for me was reading Sarah Waters’s The Little Stranger and seeing that it really was still possible to write the highest standard of literary novel – in terms of character development, psychological insight – from within that genre. I had supposed that the time for such experiments had passed, and The Little Stranger set me back to looking again at writing stories which have an unabashed supernatural content but which say something about ourselves, our desires and how we live. I found myself re-reading such novels as Shirley Jackson’s The Haunting of Hill House and Dorothy Macardle’s The Uninvited (originally Uneasy Freehold). Macardle’s novel was fascinating as she was a very political writer who used the ghost story to critique the narrow women’s role in the newly minted Irish Constitution of 1937 (even though the novel is set in Devon). 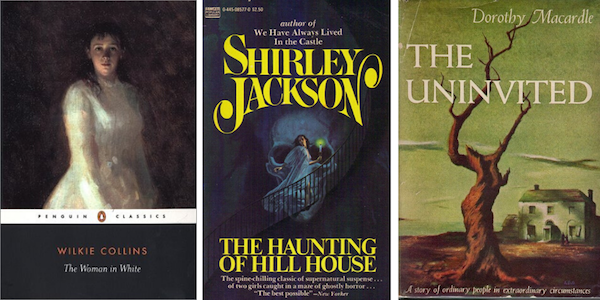 A few of Paul's Gothic faves

The ghost story as full length novel seems to me the most courageous literary form as it means the writer has to make the reader believe in a scientific ‘impossibility’ while at the same time sustaining every other expected novelistic element. I would recommend all these novels to anyone, whether you think you have an interest in the genre or not.

LT: I love to ask this question in interviews because every writer’s response is so different: one of my favourite articles from art critic Jerry Saltz, ( How to Be an Artist) includes a lesson (Lesson 11) that calls for developing one’s own School of Athens: “A team of rivals, friends, famous people, influences dead and alive.” Who would make the team in your own School of Athens and what does each team member bring to your work?

PB: Ghost story writer M.R. James would tell me when I am giving too much too quickly and preventing the effective suspension of disbelief. Sarah Waters would identify when I am simplifying a human emotion too much (every emotion in her work has realistic complexity, internal contradictions etc). Thomas Hardy would remind me that we need to know about the landscape and its history as well as its look and feel (whether or not there is time in a modern novel to explore this on the page). Jane Austen would remind me that there is the apparent meaning in a line of dialogue or description and then there is the actual meaning. Ira Levin would remind me to think big in terms of concept and not to underestimate the intelligence of the reader when it comes to seeing the satirical and socially challenging aspects of a fantasy.

LT: I’ve read that your background is in teaching creative writing workshops. What is the best advice you can offer to someone looking to really bring their characters to life--particularly if they are characters set in a historical past?

PB: It may seem simplistic and obvious but the most important single aspect of breathing life into a character is to make sure they want something.  It is easy to find your creative wheels spinning if you create a character (especially a protagonist) without a desire or series of desires which relates to the plot you are constructing. What people want often becomes the engine driving the plot and keeping the readers’ (and the writer’s) interests. This want may also be a fear they wish to escape from, but it will help bring that character to life and form them as the scenes unfold, as a character only becomes entirely real to most writers when we start to see what they say, do and feel in certain situations. During the first draft we are essentially finding out who they are, then in subsequent drafts we have the luxury of already knowing. The historical part doesn’t really change this principle except that if your protagonist is a woman or other marginalized person then, depending on the era, they may have a great deal less freedom to explore their wants, desires and ambitions, and this helps to define their struggle.  The other, related, piece of advice is really to make sure the characters experience the world through all the senses, as the senses have a conduit to the readers’ emotions that no amount of explaining what a character is feeling could ever have.

LT: You know we have to ask...favourite scene in Bram Stoker’s Dracula?

PB: My favourite scenes in Bram Stoker’s Dracula are the ones nearest the beginning when Harker is journeying at dizzying speed through the strange landscape towards Dracula’s castle. The story at this point is so open to infinite possibilities and the writing itself is magically gothic. Stoker draws from the folklore of the Balkans which he had never visited but where his younger brother had served as a military doctor. He also draws from his native Ireland with talk of suicides at crossroads and strange blue flames rising in circles over buried treasure.  Jonathan Harker, our narrator here, talks of the Carpathians as being an “imaginative whirlpool” drawing in many superstitions, and Stoker, of course, was doing the same.

A special thank you to Inanna Publications and to Paul Butler for taking us deeper into the gothic realm of Mina's Child. Grab you copy on All Lit Up!