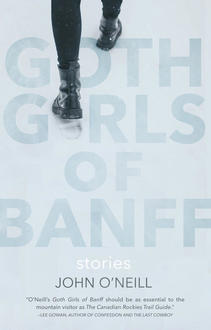 John O'Neill joins us for the latest edition of Off/Kilter to discuss his new collection of stories Goth Girls of Banff (NeWest Press)—chatting with us about how the Canadian Rockies offer up the perfect setting for the Gothic, the unpredictability of human nature and some of the personal lessons he has learned from exploring this vast behemoth, both in life and in writing.

Leyla T: How did the collection get its start and is there any particular reason why you choose the story Goth Girls of Banff for the collection title?

John O'Neill: The stories were inspired by all the trips I’ve made to the Canadian Rockies. My sister Barb and her husband Karl live in Calgary, so their house served as a sort of welcome base camp. Also, I’ve been publishing poetry for a number of years, and the relationship between the human and the natural world has always been an important theme. When I started writing stories, I felt comfortable in returning, in my imagination, to these landscapes. But each story didn’t begin with a theme; most began with a simple image. For instance, while in Banff during Christmas one year, watching all the hikers and snowshoers and skiers in their Gore-tex and down—in their aerodynamic jackets and snow pants and boots, gloves and helmets—I suddenly and inexplicably envisioned a Goth girl among them. I imagined what a refreshing contrast she would be, and also how striking against the backdrop of snowy trees and mountains. So, I had to construct a world to accommodate this vision.

It was easy to choose Goth Girls of Banff for the collection title—Banff is such an interesting word anyways, and of course we don’t associate the idea of Goth Girls with that particular locale. Also, it is perfect, thematically. Just as the Goth Girls are an anomaly in that environment, all the characters in the collection are somewhat out of place, and respond to the ominous natural world by resorting to what Northrop Frye calls a ‘garrison mentality’; that is, they desperately try to connect with their fellow humans as a way of insulating themselves. This is partly the motivation of the protagonist of Rudy and the narrators of The Book About the Bear and Attacking the Bear. Yet the Goth Girls, in their style, also reflect the inherent ‘darkness’ of the wilderness.

LT: In Canadian fiction we get a bit of the Gothic coming out of Prairie landscapes but less often from the forests or mountains. What is it about the Canadian Rockies that evokes the Gothic for you?

JO: It is their danger, their implacability, their sheer largeness that evokes the Gothic – they are beautiful, but can turn deadly in an instant. Their scope, their sublimity is, in a way, too much for human beings. We shrink before them, our insignificance amplified, our ephemeral lives set against all that geologic history. And mountains can be very claustrophobic. Recently, my wife and I travelled to the Grand Canyon, and I had a disturbing reaction to the sight of it. I found myself sweating and filled with anxiety, as if that vast hole would inevitably swallow me. It was as if my physical presence was an impertinence, my ego a lie. Mountains can provoke the same reaction. In a sense we are not, as urban dwellers, emotionally equipped to walk among them. Edgar Allan Poe wrote about this feeling in several of his stories, such as A Descent into the Maelstrom and The Imp of the Perverse. The Australian writer Thomas Keneally writes about it beautifully in his book on the American Southwest, The Place Where Souls Are Born. So, for me, the Rockies are like some Gothic cathedral, or vast haunted house, like Horace Walpole’s Castle of Otranto (Walpole is one of the fathers of Gothic literature) or Poe’s House of Usher. They are filled with dangerous rooms and hidden alcoves and passages, and must be entered warily.

LT: Through several of the stories there seem to be parallels between human and nature—that they share an inherent violence. Is there any particular moment across this collection that you feel highlights this best?

JO: I guess it’s not so much that they share an inherent violence, but that they’re unpredictable, and this can manifest itself in violence. For instance, in What is Written, the first story in the collection, the accident that happens towards the end is pretty random, nature encroaching in a terminal way. Similarly, the narrator/convict is subject to fits of anger, which he can’t control, and which of course led, years before the events of the story, to a terrible impulsive act and his incarceration. We like to believe that violence is a choice, that humans can control themselves. But a certain amount of randomness and violence in both humans and nature is inevitable, and the story dramatizes this. The convict is well aware of it, and sort of waxes poetic that things are nasty and fated, or at least for him they are: they are ‘written.’

LT: Are there any writers or artists in general that influence your work or that you take inspiration from?

JO: I admire so many writers. In terms of the short story, it’s Alice Munro, and the great Mavis Gallant. Flannery O’Connor, too, is a big influence, and Annie Proulx and Lorrie Moore. I’ve always been captivated by the stories of George McWhirter, whom I had the privilege of studying under at U.B.C. back in the 1980s. I don’t understand why he hasn’t received more recognition. Barry Lopez’s work is also a touchstone – his writing about the natural world, even in the face of climate change and our degradation of the environment, gives one hope.  Also, some painters; I’ve always been drawn to the work of Alex Colville. His paintings are so elemental, each one so stark and uncluttered, and each one with the allure of a folktale. I’m always striving to give each of my stories the same sort of elemental quality. And I love the Ukrainian/Canadian Willam Kurelek; his paintings, too, have a mythic quality, and though they appear simple, almost naïve, are filled with extraordinary detail and emotion. Music? Bruce Cockburn. His two early albums In The Falling Dark and Dancing In The Dragon’s Jaws in particular are, for me, the soundtrack of the mountains.

LT: There are a few stories that contain encounters with bears including the tense standoff in Attacking the Bear and, of course, the bear necropsy that takes place in The Book About the Bear. Are any of these moments based on real life experiences? And if not, what/who were some of your greatest resources for helping you write these details into your book?

JO: I’ve never encountered a bear on the trail myself, though I’ve seen a few from the car, on various trips to the Canadian Rockies, the Yukon and Alaska. But there are many wonderful books on bears and bear encounters, such as the late Jake MacDonald’s Grizzlyville, Thomas McNamee’s The Grizzly Bear, and Jeff Gailus’s more political but engaging The Grizzly Manifesto. Also, I had a great conversation with Dr. Ian Barker, formerly of the University of Guelph, about his experiences performing bear necropsies. But probably the biggest influence on the bear stories was Patricia Van Tighem’s The Bear’s Embrace, her harrowing and haunting chronicle of the bear attack that left her permanently disfigured and struggling, without much success, to escape the trauma. Hers is the ultimate story of the dangerous unpredictability of the natural world. For Van Tighem, nature—to misquote James Joyce—rather than history, was a nightmare from which she was trying to awake.

LT: I’ve read that you regularly enjoy taking trips into the Canadian Rockies. What is the best advice you have to give to anyone planning on visiting them for the first time and is there anything vital you could say you’ve learned (about yourself, life, writing etc) during your own explorations there?

JO: Best advice: slow down. Spend some time. Get out on the trails. Try to explore the back country, away from the tourist sites. Make sure you have a decent pair of hiking shoes. Take a small day pack, with extra sweater and water and supplies. Pay attention to the weather. Carry out what you carry in. Respect the animals. Get yourself some binoculars. Talk to a Park Warden. Visit the Cave and Basin National Historic Site, and the Whyte Museum of the Canadian Rockies. Learn about the history of the region. Read some Sartre, or Camus, to arm yourself. But it’s also okay to indulge in touristy things—I understand why one might need to buy a Banff T-shirt, or to cuddle a plush toy grizzly-bear, because these things are manageable, on a human scale, and are an antidote to the enervating vastness. But allow yourself to be overwhelmed first.

I’ve learned a couple of vital things in that landscape; one is humility. Another, in terms of my writing life, is the importance of detail. Nature is so complex, so multifarious, so rich, that in writing one must try to honour this, whether one is writing about the mountains or not.

A very special thank you to NeWest Press and John O'Neill for joining us on the All Lit Up blog! Grab your copy of Goth Girls of Banff and read on for more from our Off/Kilter column! >> 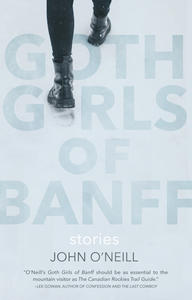