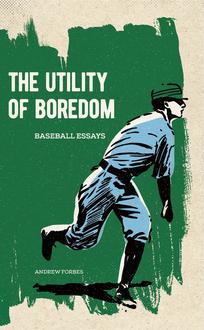 Two weeks into this year's late MLB season, some of us can appreciate—baseball is BACK! To celebrate we're revisiting an old favourite, Andrew Forbes's The Utility of Boredom (Invisible Publishing), a power-hitter collection of essays for inside baseball types and casual fans alike. Read on for the essay "Lost in the Fog," about what happens when we stay hopeful about the possibility of picking up as normal amidst delays and disapointment.

Up on the north side at Wrigley they got the game in without a delay but it was soupy. On the South Side the Sox and Jays, a pair of teams that appeared lost in the fog at several intervals during the early part of the 2013 season, watched as a heavy grey mist rolled off Lake Michigan and enshrouded U.S. Cellular Field. From the broadcast booth you couldn't see the outfielders.

The umpiring crew convened, discussed, and called for a delay. The players left the field, some jogging, some strolling. Toronto starter R.A. Dickey looked like a peripatetic as he left the mound and engaged catcher Josh Thole in conversation en route to the dugout.

The paying customers at U.S. Cellular settled in, pulled out stadium blankets, or headed for the concessions. Some doubt­ less watched games in other cities on their phones while they waited for theirs to resume. Some went home.

Those of us watching on TV were shuttled over to another broadcast, another city, another pair of teams. The crawl along the bottom of the screen said the Jays game was DELAYED DUE TO FOG. So we waited. Better than an hour in all. We waited.

As a concept, the delay is a strange thing. I've been thinking about this. It serves as a handy encapsulation of our relation ­ ship to this game. Because what other sport treats us to this? Why do we submit to it? Things aren't quite right just now, it says. Bear with us here while we wait for this storm to pass and then we'll get back to the game. Maybe.

In Chicago the Jays were hungover from an exhausting weekend series with Texas, including an 18-inning win on Saturday and a sunny packed-ho use Sunday in which they very nearly came from behind, and so probably didn't mind sitting an extra hour. Or, given that it pushed back the end of the game, maybe they did. I once sat in the dugout during a rain delay at a AAA game in Ottawa and the players, I can tell you, were not eager to get back out on the field. "Call the game;' they kept saying. "Just call the damn game."

The fog rolled off Lake Michigan, high up among the stanchions before settling on the field like a dropped handkerchief, and there was no question of playing. It was impossible. The prospect of balls dropping from the sky unseen and doing an outfielder some harm was real. The rules state that the game must be delayed if the weather or some other factor (such as, say, bees) presents a danger to the players. The fog did just that, so in came the players and out went the tarp. And when we, sitting at home before our TVs, said to ourselves, "I will wait;' it revealed something of who we are and why baseball is our game.

We carry to baseball some desire for clemency, some wish to lay ourselves down before it, to know that it is bigger than us. A willingness to submit to its whims. In truth, in the height of summer when we begin to speak in terms of "races" and "going down the stretch" we are perfectly willing to be swallowed by it. It is, in some respects, the penitent's sport. Its losing streaks and slumps, its prolonged displays of futility even among the very best players and teams, test the hardiest among us. Often, my sense at season's end, after the last out of the Series has been recorded, is one of extreme longevity. Can anyone actually remember April?

We are lost in it. The world is obscured by baseball's blinding fog. Or is it life outside of baseball that obscures a true thing?

Look at it as a weather event, an explainable natural phenomenon, but look at the fog also as a thing of queer beauty. How lacy and delicate, this curtain of floating water lowered over a baseball stadium, cloaking the lights, the upper deck, blanketing the soft green grass. See how it evokes apparitions and spectres, maybe even brings to mind an enchanted cornfield in remotest Iowa and the players disappearing within it.

Here's what that wispy and nebulous interruption at U.S. Cellular suggested to me: baseball is the name we give to a covert belief in magic. It's what we call the yearning, the desperate, clawing need for something pregnant with the impossible. It reminded me of what a strange game baseball is- one that can be delayed by snow, by rain, by fog, by swarming in­ sects. One that delivers more frustration than joy, but thereby engenders hope of a most stubborn and browbeaten variety.

Given all of this it occurs to me that what baseball requires of us is not mere attention, not understanding, not analysis, but belief. Belief in something that rolls on whether we heed it or not, and that is capable of punishing us, of bruising our hearts, when we do pay attention, but which also stands to issue great rewards when attention transmogrifies into faith. And how, finally, is that belief measured? In what units? Number of prayers lobbed heavenward? Is it perhaps measurable in a person's willingness to sit through a delay? In the number of hours spent waiting, unsure even that the game will resume at all? We can only be who we are. That's what occurred to me when news came that the Jays-Sox game would momentarily resume. That I had waited over an hour for the resumption of what was—let's face it—a fairly insignificant game in early June. That I had not switched the channel to hockey, because hockey does not move me nearly so much. That I had not turned the TV off and moved on because I recognize my need for baseball, for the ritual it provides, on hot nights in June or chilly ones in October. It is, I thought, a belief beyond my control, to which I willingly submit.

Dickey retook the mound and went on to get tagged for a bunch of runs. The Jays lost 10-6 and that was it. That was what I'd stayed up to watch, what I'd waited for. The sting wasn't salved until the next night when a ninth-inning clinger by Jose Bautista gave Toronto a chance to steal a victory in extras.

Was that enough? Was that enough to justify belief? A fog delay followed by a loss followed the next day by an improbable win? No. That's not what sows belief. It's something longer than that. A season of delays and losses, sprinkled with wins. Ten such seasons. Twenty. And the hope that it will all tum around next year. Or the next. It's understandable, given all this, that one might ask: all this loss and frustration and fruitless attention-is it enough to sustain us? But one must never be surprised by the response.

Andrew Forbes was the 2019 Margaret Laurence Fellow at Trent University. His first book, the story collection What You Need, was a runner-up for the 2016 Danuta Gleed Literary Award, and was shortlisted for the 2016 Trillium Book Award. His second book, The Utility of Boredom: Baseball Essays, is currently in its fifth printing. Andrew’s second collection of baseball essays is forthcoming from Invisible Publishing, April 2021. Find him at  andrewgforbes.com.

Read more The Utility of Boredom— purchase a copy on All Lit Up here.